Debate on Aryan Invasion vs. Migration 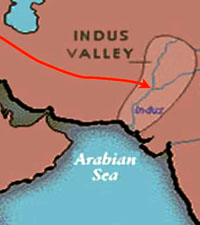 This article originally appeared on February 26 2009 at Indiawest.com.

LOS ANGELES, Calif. — The debate over the so-called Aryan invasion of India was at the core of an international conference, “The Sindhu-Sarasvati Valley Civilization: A Reappraisal,” held Feb. 21 and 21 at Loyola Marymount University here.

The use of the term “reappraisal” was intentional because scientific evidence has shown that the Sarasvati river had dried up in 1900 B.C. Consequently, the conference “is a new perspective of looking at this entire civilization of ancient India and Vedic culture,” conference director Nalini Rao told the packed auditorium.

The aim of the conference was “to reappraise the place of the river and its Vedic culture and re-examine the shared identity between the Sindhu and the Sarasvati in the light of interdisciplinary studies,” she contended.

Given the expertise of the attending scholars, the conference sought to reach a “scholarly consensus,” if not “a conclusion about the people of the Sarasvati Valley and give an idea of the shared identity of this culture,” Rao said.

Scholars have debated, often contentiously, over the competing theories that India was either settled by a migrating people from outside the country or that its culture had an uninterrupted flourishing spawned by its indigenous people.

Edwin Bryant, an associate professor of religion at Rutgers University and the author of two books on the Aryan invasion, went to the heart of either argument in his presentation of the “Intellectual History of the Debate.”

The issue was one of the most hotly contested debates throughout the 1990s. “The debate has died down in Western academic circles somewhat recently, not because it has necessarily been resolved decisively in the minds of everyone, but in part because scholars became exhausted with the polemical and emotional tenor of the discussion and the missionary zeal which the opposing views were pursued,” he stated.

To determine the origin and culture of the earliest inhabitants, the philological method was applied to Sanskrit text. “We must recall that the equation of language with race was rarely brought into question until relatively recently,” he pointed out.

Most of the arguments raised by the detractors of the Indo-Aryan migration theory rely on archeological evidence “partly due to the fact that there has been so little opportunity available for the study of historical linguistics in India,” Bryant noted.

In India, there are only three institutions devoted to the study of Indo-European linguistics, “and this whole issue is a linguistic issue, and it’s a shame (there are not more institutions), because Indians with their knowledge of Vedic have a head start in this whole field,” Bryant contended.

“It would be nice if at least that point was somehow stressed in conferences such as this, that somehow encouragement be given to Indian academic institutions to establish departments of historical linguistics.”

On the archeological front, Bryant adamantly declared that “there has not been success at finding any conclusive, tangible archeological evidence of an intrusive cultural presence into the subcontinent corresponding to that of the Indo-Aryans in anything approaching the time period required by the normative theory.”

Since the Aryans have not been identified by positive evidence, “the issue in archeological circles has consequently tended to revolve around whether the presence of Aryans can at least be excluded by negative evidence on the grounds of a lack of Indo-Aryan related evidence such as horses or chariots in relevant geographical and temporal archeological context,” he explained.

Since the site reports of Sir John Marshall, “the absence of horse remains in Indus sites has been the mainstay of the belief that the speakers of the Vedic language must have post-dated the Harappan civilization,” Bryant went on to state.

“The horse is clearly an animal highly valued in the Vedic world, and it is not unreasonable to suppose that if the Aryans were native to the Indus Valley, their presence should be evidenced by the remains of the horse there. This lacunae…tends to haunt at any efforts attempting to correlate the Indus Valley civilization with the Vedic culture.”

In his opinion, “to pronounce unambiguously that there is no evidence of the horse in the Indus Valley on one side or to insist that there is conclusive evidence on the other are both somewhat sleights of hand,” Bryant asserted.

In his view, “it is only the decipherment of the Indus script that will prove decisive in this whole issue to the satisfaction of most scholars,” he declared.

“If the Indus script turns out to represent an Indo-Aryan language during this period, there will be massive implications and corollaries for the entire Indo-European homeland problem, especially since shards found suggest that the script may go back as far as 3500 BCE.”

In other words, “an Indo-Aryan script on the subcontinent at a time when the proto-Europeans were supposed to be still more or less undivided undermines almost all homeland proposals and all migrational trajectories of the Indo-Aryan speakers,” he asserted. “That’s 200 years worth of scholarship out the window.”

The two-day conference was funded by Doshi, who, along with Uka Solanki and Bupesh Parikh, had mounted a similar conference on the same debate several years ago at Cal State Long Beach.

The reason he has brought scholars together on two different occasions to debate the issue is “because we want to resolve it,” he told India-West.

3 Responses to Debate on Aryan Invasion vs. Migration