Huston Smith: Beyond the Postmodern Mind 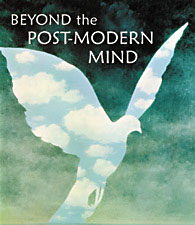 Huston Smith, Beyond the Postmodern Mind. The Place of Meaning in a Global Civilization, 3rd ed., Wheaton: Quest Books, 2003.

No matter how much we as Gaudiya practitioners may romanticize the bygone eras that are often spoken about in various scriptures, the fact of the matter is that we are living in the 21st century. Trying to turn back time is not likely to impress anyone outside the ashram doors, even if there had been any successful examples to point to. The story of Pariksit in the Srimad Bhagavatam is a poignant reminder of the inexorable progress of time. Does that mean that we just have to roll over and accept the zeitgeist of postmodernism, the endless doubts over anything even remotely connected with the grand narratives of modern or pre-modern society, a life without purpose or meaning? Do we need to reduce the God of the Goswamis into a lifeless deist deity, little more than the first mover of a universe more remote from him with every passing moment? I should think not.

One interesting and little explored alternative for devotees wishing to present Gaudiya Vaishnavism in a contemporary way is to align with the trend of thought known as perennial philosophy. First given scholarly attention by G.W. von Leibnitz in 1714, perennial philosophy was famously defined by Aldous Huxley in 1945 as “the metaphysic that recognizes a divine Reality substantial to the world of things and lives and minds; the psychology that finds in the soul something similar to, or even identical with, divine Reality; the ethic that places man’s final end in the knowledge of the immanent and transcendent Ground of all being; the thing is immemorial and universal. Rudiments of the perennial philosophy may be found among the traditional lore of primitive peoples in every region of the world, and in its fully developed forms it has a place in every one of the higher religions.”

Now, it is not unlikely that mayavada warning bells will go off for many devotees reading this, and that is not entirely without reason. Huxley’s take on perennial philosophy is decidedly advaitic, as is of course that of Sarvepalli Radhakrishnan and many other authors. However, perennialism need not be taken in that direction. In fact, as Jason Fuller has argued, much of the writing of Srila Bhaktivinoda Thakur can be seen as an early attempt to align Gaudiya Vaishnavism with perennial philosophy, though Bhaktivinoda never used that exact term himself.

Perhaps the best known proponent of perennial philosophy today is Huston Smith, Professor of Philosophy at the Massachusetts Institute of Technology and at Syracuse University, author of best-selling and award-winning books such as The World Religions (first ed. 1958) and Why Religion Matters (2001). In Beyond the Postmodern Mind, he provides not only an apology for his thought, but goes headlong up against some central issues in the modern/ postmodern project.

Smith’s basic premise is that the doubt of postmodernism creates alienation, and that the modern preoccupation with science leads to a worldview dominated by the need for control. The limitations and dangers of those approaches to life are plain to see all around us.

The present book is divided into four parts. The first one, “Dark Wood”, is the background, presenting in two chapters a brief history of postmodernism as well as a sustained argument for the necessity of metaphysics. While somewhat difficult for a general reader, the chapter on metaphysics shows clearly that the modern philosophical arguments against the feasibility or even desirability of metaphysical thought are not conclusive.

Part two, “A Clearing”, describes in one chapter Smith’s take on the perennial philosophy. While not strictly monistic as many other perennialists, Smith divides God into two: God the unmanifest, ineffable Godhead and God manifest, clothed with personal attributes. This certainly smacks of Shankara’s nirguna and saguna Brahman. However, Smith makes it clear that this does not mean that the Godhead is impersonal; rather, it is suprapersonal. The Bhagavata version of this might be likened to the neophyte (kanistha) and superlative (uttama) devotees’ understanding of the personality of Godhead. More problematic, perhaps, is how Smith divides our innermost being into the soul, the part of us that engages in an I-Thou relationship with God as Martin Buber put it, and the spirit, according to Aldous Huxley, “something similar, or even identical with, Divine Reality.” While orthodox Vaishnavas would have no problem acknowledging the similarity between atman and Brahman, this divide implies the superiority of mystic union to that of a dynamic relationship between God and devotee. This is of course unacceptable to a Gaudiya Vaishnava.

In part three, “Looking Around”, Huston Smith moves into today’s society and deals with higher education, the humanities, philosophy, theology, science, and society in as many chapters. While Smith presents many good points here, this is also the part of the book that is most dated (some chapters originating in the late seventies), and that does show at times, such as in his treatment of evolution. There are also some rather silly mistakes here, such as misreading aryurveda for ayurveda, thus thinking it means the medicine of the Aryans. (That such a mistake is allowed to persist in a third edition of a popular work such as this tells much about the knowledge of ayurveda in the U.S., one could add.)

The four chapters of part four, “A Way Out”, look toward the future, presenting possible ways in which to break free of the straightjackets of modernism and postmodernism. This is perhaps the most exciting part of the book. Huston Smith’s definition and description of a jivanmukta, or fully-realized person, may be of particular interest to devotees, though the language may at times sound off-putting. Again, we must beware against letting a different type of language mislead us – when Smith talks of dying to the self, he seems to be speaking about dying to the relative, selfish side of our personality, much as when Srila Sridhara Maharaja quoted Hegel’s “die to live”. The third edition of the book ends with an autobiographical epilogue, in which the author recapitulates twelve frontiers that he has passed in his intellectual and religious life so far.

Personally, I am not terribly impressed with everything that Huston Smith writes. However, he does present a credible, genuinely spiritual alternative to much of prevailing thought, without the need of returning to a pre-modern mindset and turning one’s back against the intellectual tradition of the West. Further, he does so with an intellectual acumen and excitement that is sorely lacking in much of present-day Gaudiya Vaishnavism. This should serve both to enthuse and shame us. It is more than a hundred years since Bhaktivinoda Thakura called for “future saragrahis”, or essential spiritual practititoners, to continue his work. It is our responsibility to take up that call in earnest and try to demonstrate his understanding of a perennial philosophy of love of God, based on the categories of sambandha, abhidheya, and prayojana, in a way that can be appreciated by spiritually minded intellectuals outside the limits of institutionalized Gaudiya Vaishnavism.

5 Responses to Huston Smith: Beyond the Postmodern Mind