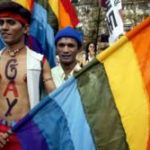 Faith organizations and individuals who view homosexuality as sinful and refuse to provide services to gay people are losing a growing number of legal battles that they say are costing them their religious freedom.

The lawsuits have resulted from states and communities that have banned discrimination based on sexual orientation. Those laws have created a clash between the right to be free from discrimination and the right to freedom of religion, religious groups said, with faith losing. They point to what they say are ominous recent examples:

— A Christian photographer was forced by the New Mexico Civil Rights Commission to pay $6,637 in attorney’s costs after she refused to photograph a gay couple’s commitment ceremony.

— A psychologist in Georgia was fired after she declined for religious reasons to counsel a lesbian about her relationship….

One Response to Religious Freedom vs. Gay Rights