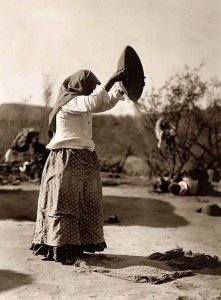 It seems that no matter where you go, across the board, there is a group within all spiritual traditions that is realizing the difference between the essential and the relative tenets of their tradition and acting accordingly. Hopefully these are more than merely attempts to appear contemporary and infiltrate “the other,” although no doubt this is sometimes all that is going on. Few as they may be, there are groups composed of thoughtful, more stable individuals who are genuinely able to separate the spiritual wheat from the cultural chaff. Such persons have always been here but their insightful voices are often drowned out by the cries of fanatics.

Although he seems oriented almost exclusively towards social change, the Indonesian theologian Zakaria Jusuf Ngelow appears to be headed in the right direction. The World Alliance of Reformed Churches reported on May 26, 2009:

…For Ngelow doing theology no longer means studying text books. Today he prefers developing “contextual theologies” for local community contexts, a process based on meeting with clergy and lay members to identify their needs and encouraging them to learn from each other and to explore the community’s traditional customs and beliefs. This, he says, is doing theology with local resources, theology that is non-academic and not based on foreign theology.

Through this process, people rediscover traditional agricultural practices based on respect for nature which prohibit a “slash and burn” approach to clearing the land. Or they learn to once again use the power of ancient peace symbols in conflict resolution, recognizing that in some settings these symbols are better recognized as signs of peace than the presence of religious leaders.

By working with people in their home communities and encouraging them to draw on local customs for resolving conflict or for responsible use of natural resources, Ngelow believes that a new form of Christianity will emerge that directly addresses local problems and allows Christians to find local solutions to those problems.

Ngelow acknowledges that his approach is the opposite of that of early missionaries from Europe who sought to erase local beliefs and practices by doing away with traditional cultures and arts, a process he calls “cultural colonialism”. By contrast, contextual theology encourages people to express their Christian faith in local cultural and artistic ways: drawing on art forms such as epic poems and weaving to tell Christian stories.

“Cultural traditions can help us do theology,” he says. “Before Christian missionaries came, God was already there, engaged with the people.”

It is worth noting that just as a spiritual tradition’s original culture is not essential to it in all respects, neither is it necessary to replace that culture entirely when the tradition itself is transplanted into “foreign” soil. Changes will be inevitable, but our task is to enact them in an appropriate manner that facilitates embracing the spiritual essence.

One Response to Few and Far Between