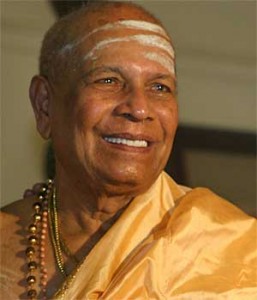 From the LA Times:

By Jon Thurber
May 22, 2009
Jois taught Ashtanga, an extremely demanding form of yoga, for 75 years. Beginning in 1975, he taught widely in the U.S., where his classes become wildly popular.

Sri K. Pattabhi Jois, the leading teacher of Ashtanga yoga who is credited with bringing the practice to a mass audience and introducing it to the West, has died. He was 94.

Jois died Monday at his home in Mysore, India, after a short illness, the Press Trust of India news agency reported.

Considered one of the most physically demanding of yoga practices, Ashtanga presents six increasingly challenging sequences of poses. A student must show proficiency in one sequence before going on to the next. Only a small number of practitioners have achieved every level.

“The goal of yoga is to create a unity of mind, body and spirit, and each system has a different quiver of tools to get there,” said David Swenson of Austin, Texas, who studied with Jois for more than 34 years and has written books and produced videos on the subject. “Some have likened it to meditation in motion.”