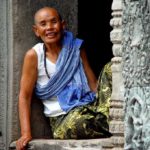 A recent article from OutlookIndia.com:

They have followers in millions, spread across the world but this 800-year-old Buddhist sect, Drukpa, feels that the world really does not know much about them.

More than 200 monks, volunteers of the sect have assembled here to discuss ways to promote and conserve the heritage. Letting women play a bigger role in this programmes is one step the sect wants to take.

The Drukpas, that has now come out into the open after centuries, is advocating for more nuns and female practitioners. “Many forms of Buddhism had stopped giving importance to women. They seemed to be afraid of letting them speak freely and because they seemed to think it was against the teachings of the Buddha,” His Holiness Jigme Pema Wangchen told PTI.

Wangchen, the present Gyalwang Drukpa and head of the 800-year-old lineage of Mahayana Buddhism, said he advocated for breaking the traditional man-made boundaries. “Many spiritual leaders accused me of destroying the lineage when I invited nuns last year to perform the traditional masked dance at my monastery in Ladakh. I want to break the boundaries, which are man-made,” said the XIIth Gyalwang Drukpa. The Drukpa-also known as the dragon yogis have so far established more than five Buddhist nunneries in the Himalayas with approximately 500 nuns.