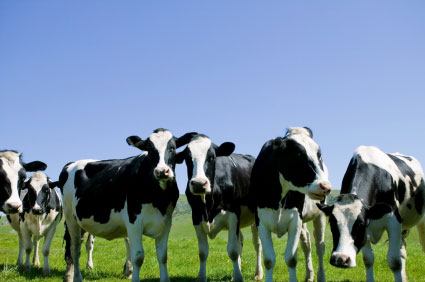 By Robin Shreeves
May 29, 2009
After years of organic dairy farming being a profitable business, the recession is threatening to put an end to many of the farms that provide organic milk to the dairy conglomerates that distribute their milk. The conglomerates don’t need as much organic milk anymore because many people have stopped buying it. The New York Times reports that many New England dairy farms are close to shutting down. Some already have. The downturn has happened quickly.

For those farmers, the promises of going organic — a steady paycheck and salvation for small family farms — have collapsed in the last six months. As the trend toward organic food consumption slows after years of explosive growth, no sector is in direr shape than the $1.3 billion organic milk industry. Farmers nationwide have been told to cut milk production by as much as 20 percent, and many are talking of shutting down.

Many organic dairy farmers are having their contracts cut, and while they have been profitable for a few years, plenty of those farms still have the debt from going organic.

For many farmers, the changes coincide with crushing debt resulting from the cost of turning organic, which can run hundreds of thousands of dollars. In addition, the price of organic feed has doubled in the last year. Credit has dried up for some, and others say it is nearly impossible to sell cows and so thin their herds.

I certainly don’t want to tell anyone they have to buy organic milk in the face of tough economic times. I would like to suggest, though, that those of us who have been committed to buying organic milk and other dairy products try to find a way to continue to buy at least some. It may help some of the farmers, and it may help ensure that when this economic crisis is over there will still be organic dairy farmers to buy from.
Here are some ideas. Maybe one of them will work for you.