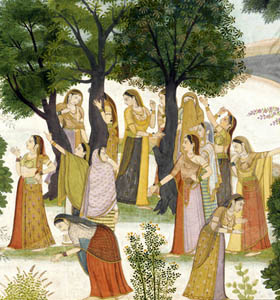 The Sociology of Bhakti in the Bhagavata

The tenth book of the Bhagavata, like the Gita (4.13), does not question the validity of the varna social system in terms of its everyday functional value (10.24.20; 10.80.33). However, although accepting the divisions of labor expressed by the classical varna social system, the Bhagavata does not accept that one is bound to the occupation of the caste into which one happens to be born; it explicitly undermines caste by birthright by noting that caste should be determined according to one’s innate nature, even if this nature involves performing the function of a caste other than the one in which one happens to find oneself by birth (7.2.31 and 35). This notion of a caste system determined by quality rather than birth can be read as implied in the Gita, but it is explicit in the Bhagavata. The Bhagavata thus radically goes against the dominant current of the times, which restricted individuals to activities prescribed for the caste into which they were born, irrespective of personal innate nature, propensities, or inclination. The enormous significance of this should not be underestimated, given the context of the day.

Also of great significance is the fact that even while the Bhagavata accepts the basic social order, albeit specifying that the division of labor should be determined by natural quality rather than birth, it elevates bhakti, or devotion to God, above it. This, of course, is a conspicuous feature of Hindu bhakti in general, but the Bhagavata goes to some lengths to underscore this. The text considers a candala, outcaste, who is dedicated to Krishna, to be superior to a brahmana who is not, even if the latter is endowed with all the ideal brahmanical qualities (7.9.10). No one is exempt from attaining the highest destination of life, devotion to God: the outcastes who live on the outskirts of town are also purified by hearing, glorifying, and meditating on Krishna (10.70.43). Krishna specifically instructs Uddhava to speak of his teachings to all those who are devoted, even if they be from the sudra caste (11.29.31). To appreciate the universality of the Bhagavata one need only compare this to statements in the dharma texts that the Veda should not even be recited in the presence of a sudra (Manu Dharmasastra, 4.99) or, worse still, that if a sudra intentionally listens to the Veda, his ears should be filled with molten lead; if he recites it, his tongue should be severed; and if he has mastered it, his body should be hacked to pieces (Gautama Dharmasastra, 12.4).

Elsewhere in the Purana (2.4.18), it is stated that even foreign tribes such as the Hunas, Yavanas and other non-Aryan people are all purified if they take refuge with Krishna. This is not mere rhetoric: we should recall, here, that one of the earliest pieces of archaeological evidence for the worship of Krishna was the column erected by Heliodorus, a Greek devotee of Bhagavan. The Bhagavata is quite serious about promoting the transcendence of bhakti to the social order: Suta, the narrator of the entire Purana, is born of a lowly mixed caste; Prahlada, one of the foremost exemplars of bhakti, is the son of a demon and describes himself as of despicable birth (7.9.12); and Narada, the most distinguished of saintly devotee sages, is the son of a sudra woman. One need only consider that Krishna himself chose to share his most intimate lilas with a lowly cowherding community to realize how far the Bhagavata tradition has gone in this direction.

The treatment of women follows similar lines. On the one hand, the secular expectations of women revealed in the text do not depart from those in the conventional texts dealing with dharma, or religious and social duties, such as the orthodox social codes given by Manu, the principal lawgiver in classical Hinduism. When Krsna attempts to send the gopis back to their husbands after they had abandoned everything to be with him in the forest, for example, he points out that:

The highest dharma [duty] of a woman is to serve her husband faithfully, to ensure the well-being of her relatives, and to nourish her children.

A husband who is not a sinner, even though he be of bad character, ill-fated, old, dull-headed, sick or poor, should not be abandoned by women who desire to attain heaven.

Without exception, the adultery of a woman of good birth does not lead to heaven. It is scandalous, fear-laden, worthless, fraught with difficulty and abhorrent. (10.29.24-6)

Similarly, when the brahmana women likewise abandon their duties to be with him, Krishna, after assuring them that they could still be united with him in thought, sends them back to their husbands on the grounds that their presence at home is required in order for their husbands to complete their sacrifices (10.23.19-34). Here, too, the Bhagavata does not challenge the norms of its day in terms of the conventional expectations of gender roles.

Where the Bhagavata dramatically departs from such roles is, again, in the context of bhakti, and this is best illustrated in the narrative above concerning the gopis. Although Krsna attempts to send the gopis back to their husbands and domestic duties, they will hear nothing of it (unlike the brahmana wives, who return once Krishna assures them that their families will not be angry with them). The gopis call his bluff:

You, the knower of dharma, have declared that the occupational dharma of women consists of attending to friends, husbands and children. Then let this be our dharma when it comes to you, the source of this advice, O Lord  after all, you are the soul within all. (10.29.32)

Here and elsewhere the Bhagavata gives a novel meaning to the traditional concept of dharma, normally understood as social and familial duty, by constructing it in the context of bhakti as denoting unalloyed devotion and service to Krishna:

Whatever activity is dedicated to me, the supreme, without self-interest, even if it be useless and performed out of fear or other such things, is dharma, O best of saintly persons’ (11.29.21).

In his famous concluding words in the Gita (18.66), Krishna instructs Arjuna to abandon all conventional dharma, and simply surrender exclusively to him. He assures Arjuna that he will free him from any sinful reaction incurred from doing this, and thus he need not fear any consequences. The Bhagavata chooses to illustrate this principle dramatically by having the gopis abandon their husbands and even their children to be with him. (10.29.4-11)

The theological message here is clear: the text portrays the gopis as prepared to surrender everything in order to attain Krishna, and as such they are exemplars of the highest possible achievement of the human soul. Since, in the mundane world, the love of the paramour is forbidden, ostracized, and dangerous, the gopis exemplify the highest attainable intensity of love for God, a love that totally disregards all repercussions; that cannot be bound by any material ethical convention; that transcends regulatory institutions such as that of matrimony; that pays no heed to social criticism; that is oblivious to personal danger, risk, and censure; and that is prepared to sacrifice everything for the ultimate beloved, God. Just as in the Abrahamic tradition, Abraham was expected to be prepared to commit an immoral deed  the sacrifice of his own son Isaac  in order to demonstrate his total commitment to God, so the gopis illustrate that the soul must be prepared to renounce conventional notions of duty and morality for the same end. They have thereby attained the highest goal of life, complete surrender to God.

Thus, while the conventional roles of women in everyday society are not challenged by the Bhagavata, the text allows them to discard these roles in the context of bhakti-yoga and, having done so, is ground-breaking in the Puranic genre by its promotion of women as not just eligible devotees, but the highest of all yogis. Uddhava, Krishna’s personal messenger, is so awed by the intensity and absoluteness of the gopis surrender to Krishna that he wishes to become a shrub so that he might come in contact with even the dust from their feet. (10.47.58-63)

The gopis are certainly more elevated than dutiful brahmanas: the wives of the brahmanas, who had risked everything by turning their backs on their husbands in order to be with Krishna, are presented as being far more spiritually advanced than their ritualistically meticulous brahmana husbands. (10.23.38-49)

The Bhagavata thus both dismisses the myopic pettiness of ritualistic brahmanism devoid of devotion, and clearly prioritizes the spiritual qualification of devotee women over the activities of the male twice-born brahmanas. But more than this, in accepting women as the highest of all yogis, including even all other bhakti yogis, the Bhagavata significantly surpasses the Gita’s mere acceptance of women devotees as qualified for liberation (9.32), a statement which itself was radical for the times. And its teachings certainly contrast with the view expressed in dharma texts such as that of Manu, the principal Hindu law-giver, that it is a firmly established point of law that there is no ritual with Vedic verses for women’ (Manusmrti, 9.18).

In conclusion, then, the Bhagavata is radical in its validation of female spirituality, its undermining of caste by birthright, the extent of its elevation of low-caste devotees, and its implicit criticism of brahmanical orthopraxy. The foregoing discussion has focused on the devotional implications of this stance for a present-day audience, since a deconstructive reading envisaging the text’s own contemporary audience is beyond the scope of this introduction, but the historical milieu of the times must be kept in mind. It is only by envisaging the extent of brahmanical hegemony, the actual day-to-day lot of low castes and outcastes, and the nature of the power imbalance in the conventional gender dynamics of orthodox Hinduism of the period, that the extent to which the Bhagavata adjusted and redefined the socio-political order of its day can be appreciated. By claiming to be a literary substitute for the supreme Godhead, Krishna, for all time subsequent to his incarnation, the author of the text is appropriating the spiritual cachet of a highly revered figure to gather the strength and authority realistically to challenge aspects of the social and cultural milieu of the day. Thus, irrespective of its theological, philosophical, or literary features, the Bhagavata provided and still provides significant resources for potentially revolutionary social change. 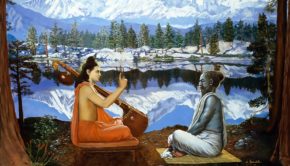 25 Responses to The Bhagavata Leans Left