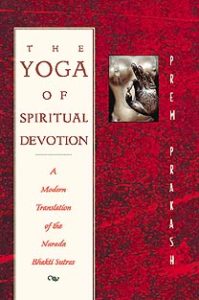 Many spiritual teachers talk about the importance of packaging their message in a way that will appeal to contemporary people. Others vehemently disagree, claiming to represent a timeless, unchanging tradition, and that any tampering with it will lead to a watering-down of the truth itself. Nevertheless, both parties depend on the use of words in presenting their teaching, and choosing the right words—words that people in today’s world will understand—will naturally have an impact on their success. Therefore, when coming across a translation of an ancient yogic text that explicitly claims to be aimed at a contemporary, Western audience, the curiosity of anyone interested in finding the optimal way of reaching out to modern spiritual seekers should be piqued.

Prem Prakash is a long-time yoga teacher and Western student of silent yogi Baba Hari Dass. In his translation and commentary on Narada’s Bhakti-sutra, he tries to bring out the essence of the path of devotion to the contemporary yogic world. In this he sets himself a noble goal—of all types of yoga, bhakti-yoga is surely the least understood in the West, while it is by far the most popular in India itself. It has often been argued that modern Hinduism has very little to do with Vedanta or the Upanishads—it is all about bhakti. How then does Prakash set out to fulfill this ambition?

Firstly, he tries to equate the Narada-bhakti-sutra with Patañjali’s Yoga-sutra. This he does by presenting the text as the Yoga-sutra generally is: in Devanagari letters, IAST transcription, and word-for-word translation followed by a translation and the author’s commentary. There is no pragmatic value in presenting the Devanagari text—the very few who can read it will also be able to read the transcription—but it looks nice, and above all, right. By making the Bhakti-sutra look like the more famous Yoga-sutra, the author wishes to borrow some of its authority. However, in claiming a similar position for the Bhakti-sutra within devotional yoga as for the Upanishads within Vedanta or Patañjali’s work within Raja-yoga, Prakash goes too far. While it is an important text, as far as I know, none of the great teachers of bhakti of ancient times have commented upon Narada’s text, neither have they much referred to it in their teachings.

Similarly, like most Western Yoga-sutra commentaries, the form of Prakash’s commentary is very different from the scholastic language of traditional Indian scriptural exegesis. Rather, he blends anecdotes, smatterings of Vedanta philosophy, and personal experiences into an easily readable and understandable text. As so often, the philosophical framework is some kind of Advaita Vedanta, arguably not that suitable for this text (sutra 50, for example, seems to presuppose at least some kind of duality).

Secondly, Prakash presents bhakti in a non-specific way. His translation of bhakti as “spiritual devotion” is a good choice in the context of today’s yoga world, where many view bhakti as some kind of passive acceptance of “the will of the universe,” or as “love” in general. Not restricting bhakti to any particular god works well for this particular book, which itself never mentions the name of any specific god. Most of the bhaktas (devotees) mentioned in the book (as well as Narada himself) have a connection to Vishnu/Krishna, as do of course the gopis in sutra 21. Of course, Narada is said to have taught the text on Shiva’s order (84)—but Prakash translates shivanushasanam here as “auspicious teaching,” perhaps in an over-zealous attempt at excluding the name of any “Hindu” god. In his commentary, the author similarly speaks only of “God” and quotes both St. John of the Cross and Hafiz. I do not know whether his failure to mention the obvious connections between some sutras and verses of the Bhagavad-Gita or the Srimad-Bhagavatam (e.g., NBS 44 and BG 2.62–63; NBS 69 and SB 1.4.8) is caused by ignorance or a conscious desire to present the text divorced from its traditional context.

Thirdly, and on a related note, the author tones down the importance of the specific practices mentioned in the text. The idea is probably again to not let bhakti be bogged down in any old forms, but it does make the book unnecessarily vague. Explaining the “singing” (kirtana, 37) that great bhaktas engage in as “to participate in, to be engaged with the world process” is doing violence to the text. Neither do I think that it will be an efficacious way of propagating bhakti. Advanced bhaktas may be able to follow the flow of their hearts, but neophytes will need concrete ways of practice. In my opinion, the lack of advice regarding such practices is the main drawback of Prakash’s edition.

Fourthly, the author tones down the radical, world-rejecting nature of the text, even claiming (8) that bhakti “consecrates” worldly and Vedic duties, when a much more natural translation of the Sanskrit word used (nyasa) would mean “rejects”. In so doing, he tries to integrate bhakti into the world and body-affirming culture of modern Western yoga. While purists will flinch, this may be a wise move, since jumping all the way to the love of the gopis or the mad saints will be not only impossible for most people, but downright off-putting.

How well does Prem Prakash fare then? He does a good job at presenting an ancient text in the lingo of the contemporary yogic world, but how much modernizing can a text take? Can a plant be transplanted into completely new soil without withering? I am not sure, but to me, Prakash goes too far. I am all for clarifying comparisons with mystics such as St. John of the Cross and Hafiz, but if Narada doesn’t even agree with devotional sages such as Shandilya from his own cultural context (18), it is not likely that he would think their teachings exactly the same as his. If we throw out all the specifics of bhakti and make it all abstract and general, we may lose its specific flavour. Further, and perhaps more damagingly, losing ourselves in such vague musings, we easily forget the “hard” part of bhakti, the day-to-day practice everyone will need to reach the soul-stirring heights evinced by the saints. If that happens, not even the best packaging will be of any use.

One Response to Ancient Text, Modern Commentary: A Daunting Task