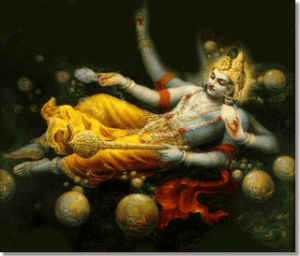 The poetry of Srimad Bhagavatam posits a multiverse cosmos with innumerable universes emanating from the pores of the body of Vishnu as he exhales in yogic sleep. With his inhalation they all collapse and then again expand in a beginningless and endless cycle of samsara. The world is but the dream of God.

Such poetry and metaphysics were thought to have seen their day long ago, but with the provocative scientific notion of the multiverse, metaphysics may be poised to make a comeback. The multiverse is the idea that the world consists of innumerable universes, as opposed to the longstanding opinion of the scientific community and Christianity that the world consists of only one universe whose laws we are gradually coming to understand.

The term “multiverse” was coined by psychologist William James and since then it has been hypothesized about in cosmology, physics, astronomy, philosophy, and transpersonal psychology. But in recent history most cosmologists have barely considered the multiverse hypothesis scientific at all, and for good reason. Mark Vernon, author of After Atheism: Science, Religion, and the Meaning of Life, asks, “If the multiverse is as wildly speculative as even its advocates acknowledge it to be, then might the theory be an instance of science being led more by metaphysics than physics?”

Perhaps, but there is not much physicists can do about it given recent discoveries centered around the once scoffed at anthropic principle, or fine-tuning argument, that arguably points to a—God forbid—universal designer. In order to avoid having to surrender to a theistic answer as to why the universe is as improbably precise as it is, positing a multiverse, however speculative, is thought by some to be a way around the creator—to beat the odds.

While scientists like Stephen Jay Gould previously mocked the fine tuning argument, it’s not as easy to do so now. In the late 1990’s astronomers discovered that the universe is expanding at an accelerating rate despite the force of gravity. Unable to concretely identify the force behind this phenomenon, physicists have simply called it “dark energy.” Whatever dark energy is, the role it plays in the drama of our expanding universe is extremely precise: if it were even slightly greater, the universe would have expanded far too rapidly to be able to form galaxies, stars, and planets, and we would not be here to observe them! Apparently it’s very difficult to dismiss this level of universal fine-tuning or to understand the force behind it1. In the words of Nobel laureate Steven Weinberg “This is the one fine-tuning that seems to be extreme, far beyond what you could imagine just having to accept as a mere accident.”

In this way the once dismissed anthropic principle has resurfaced. Consequently, some scientists have taken a speculative leap to embrace the multiverse in an effort to take the fine-tuner out of fine-tuning.

To be clear, here is the idea: Scientists have analyzed the probability of a universe capable of supporting life-forms that are intelligent, and have estimated the odds to be extremely low.  If there is only one universe, and life has occurred on it, we must conclude that we are either extremely lucky or that the universe was designed for life.

But if, as proposed in a multiverse theory, we live in one universe among many, whose properties are distributed across a wide range, then the odds would favor having at least one universe with intelligent life. Basically, a multiverse provides a way to beat the odds and avoid the gods.

Bernard Carr, astronomer at Queen Mary University, London, says, “Everyone has their own reason why they’re keen on the multiverse. But what it comes down to is that there are these physical constants that can’t be explained. It seems clear that there is fine tuning, and you either need a tuner, who chooses the constants so that we arise, or you need a multiverse, and then we have to be in one of the universes where the constants are right for life.”

Physicists can only hope that scientific data and observation can eventually lend support to a multiverse. Some feel the stakes are high. Physicist Leonard Susskind, arguably the father of string theory, writes that “If, for some unforeseen reason, the landscape [i.e., the many-universes version of string theory] turns out to be inconsistent — maybe for mathematical reasons, or because it disagrees with observation — I am pretty sure that physicists will go on searching for natural explanations of the world. But I have to say that if that happens, as things stand now we will be in a very awkward position. Without any explanation of nature’s fine-tunings we will be hard pressed to answer the ID critics.” So physicists are trying to come up with hard evidence to avoid metaphysical multiverse speculations, but at the moment that is about all they have, not conclusive math2, nor observation, but trepidation and perhaps faith3.  As physicist Paul Davies puts it, “Evidence of fine-tuning is taking science in a direction that collapses the traditional distinction between physics and metaphysics.”

But we should remember that physics is the one branch of science in which talk of God has never been out of hearing range. Does moving in the direction of multiverse metaphysiscs to avoid God really save one from the savior anyway? Without going into the metaphysical details—not if he is Vishnu. Dark energy, anyone?

3 Responses to Dark Energy Anyone?