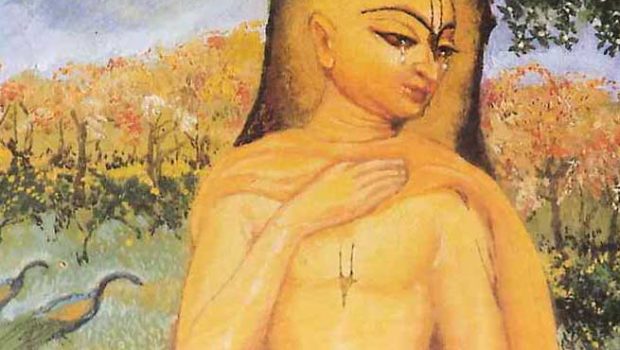 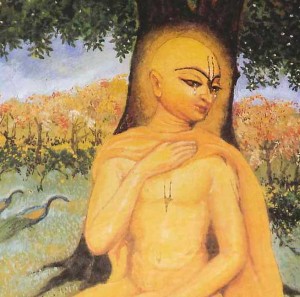 While pursuing the highest love during his earthly lila, rasaraja Krishna was dumbfounded to experience the measure of Radha’s love, for it exceeded anything that he had ever experienced. Because he always considered himself the king of love, this experience threw Krishna into an existential crisis, forcing him to ask the difficult question, “Am I really the king of love, when it is apparent that Radha’s love exceeds anything that I have experienced?” When the primary reason for his descent—to taste the highest love—was thus frustrated, this in turn affected his ability to accomplish his secondary purpose—to teach the world about love.

To resolve this twofold crisis, Krishna, keeping with his nature, at­tempted to steal the emotions of Radha. A clever thief knows where to hide. Where did Syama go? That beautiful, dark-complected thief hid himself in the age of darkness, Kali-yuga, disguising himself as a sadhu. However, that which he stole was more brilliant than mil­lions of suns. Thus when his devotees—the dearest of Radha—looked for him, he was not hard to find.

Realizing the likelihood of his capture at the hands of his devo­tees, Krishna gave away the stolen goods in an effort to deflect atten­tion, advising each person who received the goods to pass them on to another. This, however, only made matters worse, for seeing the dis­tribution of prema, his devotees became suspicious. They knew that a love as brilliant as Radha’s could only be experienced in relation to Krishna himself and that he must therefore be in their midst. Fur­thermore, although Krishna had tried to distribute the goods, because of the nature of prema it only swelled within him that much more, turning his complexion golden. Attracted by his golden hue and see­ing the measure of his prema, they dubbed him Gaura Krishna and proceeded to broadcast the truth to the whole world. In the end, this golden Krishna, in the captivity of Radha’s two best friends, wrote his confession in eight stanzas, begging for mercy. Only after receiving that mercy was he able to realize the consequences of what he had done and fully taste Radha’s love.

8 Responses to Gaura: Krishna in Crisis