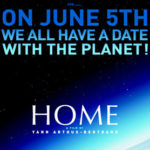 On Friday, June 5, Home will be simultaneously released in theaters, on television, on DVD, and on the Internet. The creators’ hope is that it will reach as many people as possible.

The documentary about environmental issues, which was filmed across fifty countries and shot entirely from the sky in high definition, offers a powerful commentary on the major environmental and social issues challenging our world and calls for a new awareness that protecting the earth is indispensable. It is the result of a collaboration between the photographer Yann Arthus-Bertrand, the producer and director Luc Besson, and Francois-Henri Pinault.

It is the first movie to be released simultaneously across all media and all continents. The simultaneous worldwide release provides as many people as possible with the opportunity to watch this profound documentary as a global collective. Any proceeds from the sale of merchandising products related to the film will be donated to the organization www.goodplanet.org.

According to the website, Home is also carbon offset. Meaning that all the CO2 created by the film’s production is offset by funding clean energy for those who have none. Now that is green.

We encourage everyone to watch it free on youtube at http://www.youtube.com/homeproject and then discuss it here on the Harmonist.

Other related videos can currently be found at the above link as well.