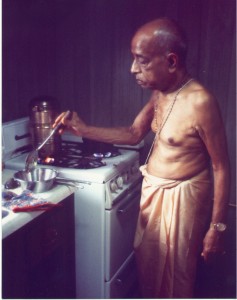 My wife and I do not follow too many secular traditions, but we never fail to acknowledge each other’s birthday by conferring a gift. Usually the gift is something incredibly practical (a cooking implement), health oriented (a yoga mat), or readable (a book of stress-reducing Buddhist parables). This past spring, however, I was convinced that I was due a birthday gift that would eclipse all of these sensible, but mostly inexpensive items: an Ipod touch.

Naturally, my rationale for requesting the Ipod was that it would bring order to a sprawling collection of lecture CDs, while making those lectures available to me at all times. I strengthened my case by using the floor model at the Apple Store to successfully navigate to a Gaudiya e-book I had just read. On account of the economic realities that hit my household in March, however, my wife informed me that the Ipod would have to wait.

On my birthday, I reached into a bag brimming with colorful tissue paper and groped around for some unknown gift. Within moments, I pulled out three beautiful and framed photos of Srila Prabhupada. Although the frames did not appear to have built-in mp3 players (I still held out hope), I was nonetheless instantly captivated.

As I beheld a well-known photograph of Srila Prabhupada standing shirtless before a humble-looking stove, my wife said, “I really like this picture because it makes Prabhupada look so human, and so ordinary.”

Although I had seen and admired this picture many times before, my wife’s observation prompted me to contemplate the image more deliberately. Of course, there is nothing ordinary at all about Srila Prabhupada, and everything about what is captured in the photo is quite extraordinary. Indeed, my copy of Lord Krishna’s Cuisine is dog-eared as much from my reading the Prabhupada cooking pastimes interspersed throughout as it is from my occasionally successful execution of its recipes. I agreed, however, that there is something about how Prabhupada’s majesty (aisvarya) is contained or covered in this image that aids in bringing out the incredible sweetness (madhurya) of his human-like appearance among us.

By contrast, in many pictures we see Prabhupada surrounded by the external opulence of ornate vyasasanas, elaborate garlands, and throngs of attentive devotees.  Such images attract us (and rightfully so), but in a different way than this comparatively austere scene of the founder-acarya of an international institution holding a slotted spoon. After mounting the picture on a kitchen wall, I continued to think about why I was so struck by the humanity of this image.

Like many devotees, when I first came to Krsna Consciousness I tried to absorb as much “Prabhupada nectar” as possible.  Of those nectarean stories captured in books and on film, I loved most those that spoke of the intimacy enjoyed by his first disciples. I relished hearing of the ways Prabhupada would joke with them, make adjustments (or perhaps stand firm), and respond to new information, situations, technologies, and personalities. The sweetness of these stories is much enhanced by the fact that the majesty of Srila Prabhupada was so often contained or subdued, facilitating an intimacy (and sometimes an almost casual rapport) that would be impossible in the full face of the acarya’s aisvarya. Indeed, aisvarya creates distance that impedes, rather than facilitates bhakti, and it could be said that only to the extent that madhurya is present is there opportunity for bhakti. Narayana does not need to eat. That is his aisvarya. But he does eat, and it is this madhurya within the asivarya of Vaikuntha that makes devotion to him feasible.

As those disciples of Srila Prabhupada who directly experienced his sweetness (and in turn embody that sweetness themselves) become scarcer, there is more than a little danger that Prabhupada’s majesty will become a singular point of emphasis. Indeed, there are those who advocate absolute deification of Prabhupada, and others who craft increasingly hagiographical accounts of his pastimes and accomplishments. In reality, however, no degree of exaggeration or imagination is required to glorify Prabhupada. In fact, there is something unbecoming about glorification that is not factual and that does not conform to guru-tattva, however well-intended.

Now that the above photo is a permanent fixture in my kitchen, I find myself contemplating how wonderful it is that Prabhupada’s awesomeness was tempered by sweetness. Although born a few years after Srila Prabhupada departed, I can’t help but wonder, “What was it like to be there?” Perhaps the best way to find out is to seek out the company of those who experienced that sweetness directly, tangibly embody this aspect of Prabhupada, and eschew characterizations of their guru that are replete with awe and reverence but devoid of the intimacy, sweetness, and practical common sense that are essential to bhakti.