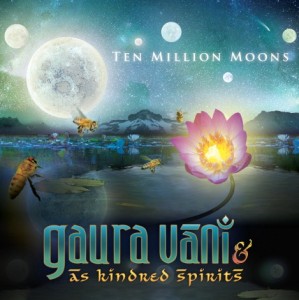 “The student is to read the facts with a view to create, and not with the object of fruitless retention. Students like satellites should reflect whatever light they receive from authors and not imprison the facts and thoughts just as the Magistrates imprison the convicts in the jail! Thought is progressive. The author’s thought must have progress in the reader in the shape of correction or development. He is the best critic, who can show the further development of an old thought; but a mere denouncer is the enemy of progress and consequently of Nature.”
–The Bhagavata by Bhaktivinoda Thakura

As I see it, Gauravani & As Kindred Spirits’ new record, Ten Million Moons, has done musically exactly what Bhaktivinoda was urging devotees to do with their Bhagavatam study. They have taken the traditional songs of the Gaudiyas and reflected their bright light in a most refreshing, heart-stirring, and bold way. True to the tradition, they have made these songs more appealing to a greater audience as well as the devotee community by adding the flavor of their own experiences and musical influences into the mix. I bet if Bhaktivinoda himself heard As Kindred Spirits’ renditions of his songs like “Krishna Murari” or “Jiv Jago”, he would be supremely satisfied! I don’t know if it’s a coincidence, but the fact that “Jiv Jago” was turned into a gospel song made me think of Bhaktivinoda’s interface with Christianity and the progressive spirit he so much stood for.

Instead of doing either some terrible new age record in the name of open-mindedness or, on the other extreme, recording off-key singing with only a broken mrdanga and mismatched kartals in the name of being genuine, Gauravani’s group has made a record that sounds like it’s straight from the 21st century while at the same time carrying the same original passion and devotion that these songs were written with. It is indeed amazing how they have combined the serene classical Indian tunes with modern western musical influences.

Some people think—and this thinking surfaces in many different contexts—that expanding on the already existing tradition equals minimizing the tradition and its teachers. This kind of timidity and rigidity is, in my opinion, the very noose that the tradition is made to hang from in the hands of the so-called orthodoxy. I’m sure the same people criticize Gauravani & co. for doing what they are doing because “it’s not how Prabhupada did it,” but let the fundamentalist dogs bark while the tour bus moves on.

I’ve heard some people say that the record is a mishmash of different influences that doesn’t really hold together. I strongly disagree. Although it’s true that there is a wide variety of different styles and themes on the record, all the songs are threaded together in a way that actually makes the diversity a strength. Even the man-and-guitar type song, “Surrender,” sinks perfectly in between the chants and prayers. Another bold move is the song “Stop and Talk (He Natha)”, which basically sounds like somebody accidentally dropped a Red Hot Chili Peppers record, hip hop beats, and ancient chants into a blender. Tasteful mixing up of styles makes the record very listenable and has made me return to it again and again.

The composition and production really make this record a landmark in my book. Layers upon layers of powerful soundscapes have been stitched together to form a dynamic storm of kirtan. I like very much how the silent and rowdy parts play into each other and keep the listeners on the edge of their seats (or should I say yoga mats) throughout. The fast parts of songs like “Krishna Murari” and “Dina Dayal” sound especially powerful after the slower portions. The final mixing and mastering on the record is done by Ben Leinbach, who has worked extensively with some of the most famous kirtaniyas like Jai Uttal and Deva Premal to name a few, as well as recorded several yoga and mediation records. It comes through too. The production is world-class standard and makes this piece stand tall among any other world music recording I’ve heard. Also, the executive producer, Steve Reddy of Equal Vision Records, has nearly twenty years of experience in producing music, as he turned his Krishna Conscious DIY punk record label into a multimillion dollar business with dozens of successful bands. I’m not surprised at all that the kirtan veteran Jai Uttal said Gauravani’s band is the best western kirtan group. It’s wonderful that something this good is coming from the Bhaktivinoda parivara of Gaudiya Vaishnavism. Kirtan is such an essential part of our lineage but still pretty much all prominent kirtaniyas come from other paths. I have a strong feeling that Gauravani & As Kindred Spirits are on the way to changing this.

This record represents what our tradition needs on every level: be it musical, literary, artistic, scientific, or philosophical. As long as the teaching doesn’t change, the expressions of that eternal truth that has come to us through Gaudiya Vaishnavism should keep taking new, refreshing forms and in that way inspire us to dedicate ourselves, and feel proud and privileged to do so.