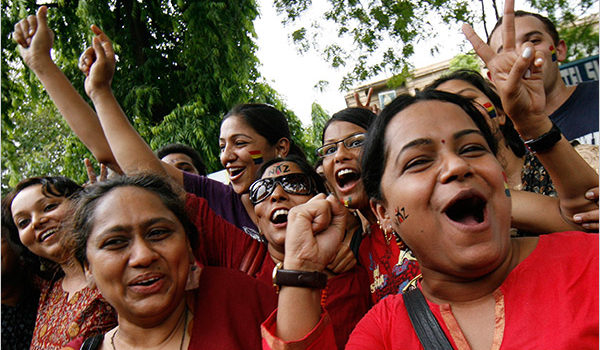 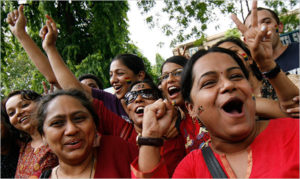 NEW DELHI —In a landmark ruling Thursday that could usher in an era of greater freedom for gay men and lesbians in India, New Delhi’s highest court decriminalized homosexuality.

“The inclusiveness that Indian society traditionally displayed, literally in every aspect of life, is manifest in recognizing a role in society for everyone,” judges of the Delhi High Court wrote in a 105-page decision, India’s first to directly address rights for gay men and lesbians. “Those perceived by the majority as ‘deviants’ or ‘different’ are not on that score excluded or ostracized,” the decision said.

Homosexuality has been illegal in India since 1861, when British rulers codified a law prohibiting “carnal intercourse against the order of nature with any man, woman or animal.” The law, known as Section 377 of India’s penal code, has long been viewed as an archaic holdover from colonialism by its detractors.

“Clearly, we are all thrilled,” said Anjali Gopalan, the executive director and founder of the Naz Foundation, an AIDS awareness group that sued to have Section 377 changed.

“It is a first major step,” Ms. Gopalan said during a news conference in Delhi, but “there are many more battles.”

Thursday’s decision applies only in the territory of India’s capital city, but it is likely to force India’s government either to appeal the decision to the Supreme Court, or change the law nationwide, lawyers and advocates said.

Outside the hall where the Naz Foundation news conference was held, dozens of young men and women gathered to celebrate, along with a group of hijras, men who dress and act like women who classify themselves as belonging to neither gender. “It is a victory of human rights, not just of gay rights,” said one 22-year-old man who only identified himself as Manish.

Gay men and women have rarely been prosecuted under Section 377 in India in modern times, but it has been used to harass, blackmail and jail people.

Britain legalized homosexuality in England and Wales in 1967, but many of its former colonies, including Singapore, Zimbabwe and Malaysia, still retain strict laws against same-sex relations.

India’s society is generally unwelcoming of homosexuality except in the most cosmopolitan circles. It is not uncommon for gay men and women to marry heterosexuals and have families, while carrying on secret relationships with members of the same sex.

In their decision, Chief Justice A. P. Shah and Justice S. Muralidhar declared Section 377, as it pertains to consensual sex among people above the age of 18, in violation of important parts of India’s Constitution. “Consensual sex amongst adults is legal, which includes even gay sex and sex among the same sexes,” they said.

The old law violates Article 14 of the Constitution, which guarantees all people “equality before the law;” Article 15, which prohibits discrimination “on grounds of religion, race, caste, sex or place of birth;” and Article 21, which guarantees “protection of life and personal liberty,” the judges said.

Still, the decision was condemned from many corners in India. “This is wrong,” said Maulana Abdul Khaliq Madrasi, a vice chancellor of Dar ul-Uloom, the main university for Islamic education in India. The decision to bring Western culture to India, he said, will “corrupt Indian boys and girls.”

The ruling comes after a decade-long, broad-based campaign organized by gay rights advocates, authors, celebrities, lawyers and AIDS awareness groups from around the world. India has one of the world’s largest populations of people with AIDS, and Section 377 was viewed by many advocates as a hurdle to education about safer sex.

Now that the High Court has ruled against Section 377, some say the next step is a change in the way that society views gay people.

“The real problem is still the stigma attached,” especially outside big cities, said Ritu Dalmia, one of India’s best-known chefs, who lives with her girlfriend in New Delhi.

Change particularly needs to happen in rural India, she said in an e-mail message Thursday afternoon. “I have met women who were forced to sleep with men so that they could be ‘cured’ of homosexuality,” she said.

“Today is a historical moment where at least some tiny steps have been taken, but there is still a very, very long road ahead,” she said.