Review: The Passion of the Western Mind 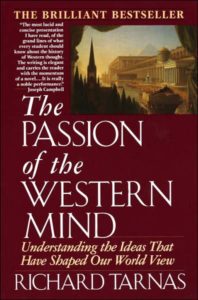 If you have been searching for a book that covers the entire corpus of Western philosophical thought in one volume, you have to stop at The Passion of the Western Mind by Richard Tarnas. Unlike other Western philosophy books that can become dry and tedious even for a person with a moderate philosophical appetite, this book reads like a novel. Tarnas presents a history of thought with a level of insight and understanding that reaches depths previously not considered possible for an introductory work. Not only does the reader get the particular ideas of each philosophy and era of thought, but also the cultural influence and the context out of which each philosophy arose. What fueled each thinker? What particular convictions influenced philosophy of the era? What pressing concerns building in history of thought motivated each thinker to construct their particular system? These are the invaluable insights Tarnas makes clear for the reader.

Tarnas divides his book into three macro-sections: classical, medieval, and modern, which, as he explains, are in turn dominated by ideas of a philosophical, theological, and scientific character, respectively. He begins with Plato and ends, roughly five hundred pages later, with a survey and analysis of Postmodernism. Sections 1 and 2 cover the Greek Era, from the pre-Socratics and the twin geniuses Plato and Aristotle, to the Neoplatonists like Plotinus. Tarnas offers a vivid explanation of the tension between the two modes of thinking coming from Plato and Aristotle respectively: understanding transcendent forms and seeing the immanent world as the imperfect reflection of the forms, or, exploring the immanent structure in the world and understanding the transcendent in that light.

Tarnas’s treatment of medieval Christian thought in parts 3 and 4 is one of the best introductory expositions of Christian history that I have read. He emphasizes the role of the Greeks in shaping Christian philosophy, namely through Plato’s influence on St. Augustine and Aristotle’s influence on St. Aquinas, who declared Aristotle to be “the Philosopher.” Part 5 delineates the development of modern thought, including the initial tension between scientific thought and the church and the subsequent reconciliation and secularization of society. Part 6 explains the journey of the modern era and its transition to the present postmodern era. Tarnas discusses key figures like Kant, Hume, Locke, Hegel, and Nietzsche, all of whom were critical in this development, in an intriguing and thought provoking manner.

The epilogue, though interesting and entertaining, can be too speculative for my comfort. The influence of Jung’s depth psychology and its derivatives is very evident in Tarnas’ writing. Perhaps the most engaging idea presented in the epilogue is that postmodern humans are in a double bind similar to Gregory Bateson’s theory of schizophrenia. Tarnas calls it “the Post-Copernican Double Bind.” The idea is that since the empiricists and Kant, we as humans can no longer hope for certainty in knowledge, having to grapple with contradictory “truths” that together render our ability to assess reality obsolete.

Another interesting idea is the outgrowth of feminist movements as an appropriate reaction to the overtly masculine and aggressive nature of the western mind. Tarnas highlights the environmental ramifications of the one-dimensional masculine mind which has put human existence in jeopardy.

Overall, Tarnas’ conclusion fell flat for me in that the universal revelations that he attributed to archetypal influences of nature revealing themselves through the human mind were all Western. Apparently nothing of similar consequence appeared in India even though the Eastern mind, according to his theory, would have been subject to the very same universal archetypal influences at the exact same time in history. Either the Western mind is superior, or there is something else behind the revelations of the Western mind that caused them. Also, the dilemma he presents—humanity’s alienation from nature and inability to even apprehend an objective world, the down side of an approach to life that otherwise enabled man to rise above nature and accomplish so much—seems easy to solve by adopting a Vedantic world view in which the objective world can be apprehended though trans-rational exercises and humanity’s distinction from nature does not translate into exploitation. Such a world view does not prohibit humankind from empiric scientific discovery, and there is nothing that such inquiry would uncover that would contradict or bring into question the Vedantin’s understanding of consciousness—at least to the extent that scientific discovery cast a shadow of doubt on much of Christian revelation (a virgin birth, resurrection, etc.). Certainly this requires the understanding of revelation in Vedanta to be dynamic, unlike the current face of Gaudiya Vaisnavism.

So let the Western mind look Eastward in essence, where consciousness has been center stage for centuries. Regardless of any grievances, the book is a very good read for Gaudiya Vaishnava practitioners who are interfacing with the Western world and I highly recommend it.

2 Responses to Review: The Passion of the Western Mind