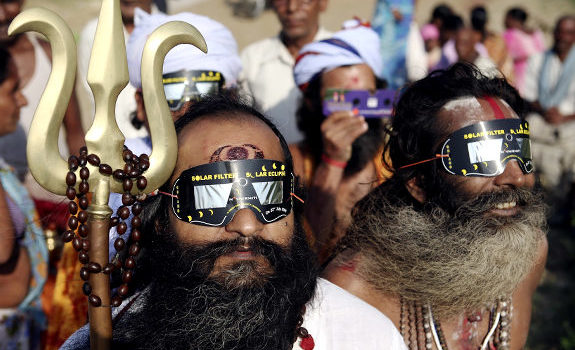 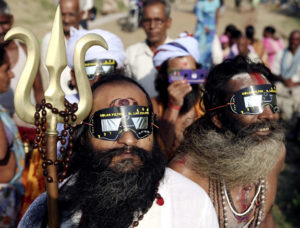 Yesterday Asia experienced the longest total solar eclipse of the coming century. Many of the prime sites for viewing the eclipse were in India; one of the best locations was Varanasi, a sacred town on the banks of the Ganges. Thousands of Indians traveled there and elsewhere to observe the event and perform appropriate rituals with the hope of attaining good fortune and driving away sins. A solar eclipse can, however, represent far more than the acquisition of fortune or the absolution of sin.

The typical meaning of dharma is performing pious rituals in accordance with scripture and one’s karmic propensities with the hope of advancing one’s material situation. This is the dharma that most of the thousands of Hindus undoubtedly engaged themselves in yesterday when honoring the rare and exciting eclipse. But looking deep into the Vedic canon, we find a very charming connection between dharma and the solar eclipse.

The Bhagavad-Gita, a primary text for most Hindu sects, takes place on the very “field of dharma,” beginning as it does with Dhrtarastra’s following inquiry:

Dharmaksetra, the field of dharma—also known as Kuruksetra—has been highlighted as sacred in various sruti texts, and the avatara of Visnu, Parasurama, is said to have performed sacrifices there. But the Gaudiya Vaishnava tradition has presented a revolutionary explanation of Kuruksetra’s sanctity—one that ties the solar eclipse to the heart of dharma and divinity.

The Bhagavata Purana has defined dharma—rather essentially—as that which pleases God.2 Nine cantos later, during its climax, the Bhagavata narrates how Krishna, the inhabitants of Dvarka, and the villagers of Vrindavana all traveled to Kuruksetra more than fifty years before the Bhagavad-gita was spoken to observe an eclipse and bathe in the sacred lake Rama-hrada. This was the first time Krishna had seen the residents of Gokula, including his beloved milkmaidens, since his departure to Mathura some forty years earlier. After meeting with various members of the cowherd community, as well as Nanda and Yasoda, Krishna met with Radharani and the gopis in a secluded place. It is in this private place that Krishna forever tied the eclipse of the sun by the moon to the eclipse of God’s divinity by his devotees’ love, for it is here that Krishna spoke the following words to Radharani and her handmaidens:

My dear gopis, everyone considers themselves fortunate if they possess devotion for me, and by that they achieve an eternal life of nectar. But I must admit that I consider myself most fortunate because I have come in touch with the wonderful affection found in your hearts.3

Krishna thus revealed the unparalleled love of the gopis, and Radharani in particular, admitting that he has been subjugated by the unfathomable degree of their love.4 The Vrindavana Goswamis have reasoned strongly that this type of love, that has the power to conquer over God, is the most pleasing to God, and therefore it is the most dharmic. It is prema-dharma.

A solar eclipse is more than a spectacular phenomenon or an opportunity to behave righteously and piously. An eclipse takes us to the zenith of dharma, where the majestic, sunlike Godhead, Surya-Narayana, blacks out in the bewilderment of love and becomes Syama, only to emerge brighter than ever as Gaura, illuminating the whole wonderstruck world.

19 Responses to The Eternal Eclipse