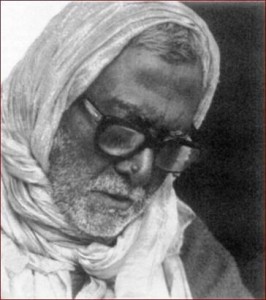 Should we look for anything less than the most qualified person when we are looking for our spiritual guide? Certainly not. The difficulty, however, arises when we look at our own self. It is said that “it takes one to know one.” What is the aspiring disciple’s capacity to recognize a qualified devotee? This must be considered.

Scripture gives us general observable criterion, that of brahma-bhuta or brahma-nistham, which consists of joyfulness (prasannatma), absence of hankering and lamentation (na socati na kanksati), and equal vision (samah sarvesu bhutesu). This speaks not of the highest qualifications, but of those that amount to a transcendental passport, while the visa is yet to come (visate tad anantaram). Yet even these symptoms are not always observable.

One of Srila Prabhupada’s disciples once asked if she could paint a picture of Srila Prabhupada. He agreed and gave her a photo of himself, one in which he appeared very grave. After some time Srila Prabhupada asked her about the painting and she replied that she did not proceed with the painting because in the picture Prabhupada looked sad. “Sad?” he replied, “That was a moment of ecstasy.” Surely he was joyful (prasannatma), but this kind of joy requires philosophical, if not spiritual, eyes to see. What then to speak of observable evidence of any higher attainment? Atah srikrsna-namadi na bhaved grahyam indriyaih, as one cannot see Krishna with material senses, so one cannot understand a mahabhagavata in the highest sense of the term without having considerable spiritual attainment oneself. Again, it takes one to know one. A person who has conclusive evidence as to the spiritual attainment of their guru is indeed qualified to do the work of guru. We bow down to such a student.

Once Srila Sridhara Maharaja spoke of three types of guru. The first type has two feet in the spiritual world. The second has one foot here and one foot there. The third has two feet here but both eyes always there. Recently, I found a reference to this notion in Sri Jiva Goswami’s Bhakti-sandarbha. Jiva Goswami describes three types of mahabhagavatas. The first are situated in the spiritual world in a spiritual form while appearing in the material world. The second do not have material conditioning but have not yet realized their siddha-deha. The third are still under the dim influence of the sattva-guna, yet have pure devotion as their only goal in life. Narada Muni, who had a mystic darsana of Sri Krishna, only to have him disappear and tell him that he would not have his darsana again until he was completely pure, is cited as an example of this third type of mahabhagavata. From this we can also understand Srila Prabhupada’s apparently contradictory statements about the qualities of a mahabhagavata found throughout his books. At one time he speaks of the first type, at another of the second or third. Which shall we choose? Which will we be able to recognize when furthermore, if they are preaching, they will be functioning as madhyama-adhikaris?

Over lifetimes we have acquired sukrti, bhakty-unmukhi sukrti. Proportionate to our sukrti, we are qualified to connect with the transcendental realm and its ambassadors. Qualification of guru is an important consideration; yet no less important is the qualification of the disciple. The absolute truth is not in shortage of qualified representatives. It is us who must qualify ourselves to recognize them, and this requires all of the sincerity we can gather. And this, our sincerity—truthfulness—is all we have. As like attracts like, our sincerity in connection with our sukrti will attract a representative of Godhead. Our sincerity may be great, and our sukrti small. This also must be considered. One may drive a Cadillac, and another a Volkswagen. The driver of the Volkswagen may press the accelerator to the floor, giving all his sincerity, while the driver of the Cadillac may be stepping on the brake. One may have more sukrti than another; the other may be exercising greater sincerity. In this way there is much to consider. It is not black and white. Yet surely our sincerity will not fail us for it will bring us closer to God, albeit sometimes in a roundabout way. And we are not to argue with that. It is his will about which we are inquiring.

Sometimes in the name of generating faith we affect the opposite. Comprehensive knowledge of scripture is necessary. Anyone can quote scripture to support their point of view, but few approach the scripture to have their views altered, what to speak of realizing the scripture’s purport. I have seen how those who lack faith in others pass on only doubts rather than faith in the name of preaching about the qualifications of guru. If you yourself doubt that there is anyone advanced enough to do the work of guru, how can you preach to others? Just see the foolishness in this. By thinking there are no advanced devotees one can hear from, one inadvertently proclaims oneself to be the most advanced. This is the typical thinking of the kanistha-adhikari. He passes his doubt on to others. They, in turn, imbibe that consciousness and go out to scrutinize all prospective gurus, thinking, “I must have the most qualified guru,” implying, “because I am so qualified.” With this mentality we will never find a qualified guru, unless one hits us over the head and brings us to our senses. A mahabhagavata we should search out, no doubt, but the search must begin within ourselves.