The Meat of the Problem 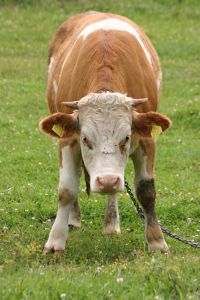 The debate over climate change has reached a rarefied level of policy abstraction in recent months. Carbon tax or cap-and-trade? Upstream or downstream? Should we auction permits? Head-scratching is, at this point, permitted. But at base, these policies aim to do a simple thing, in a simple way: persuade us to undertake fewer activities that are bad for the atmosphere by making those activities more expensive. Driving an SUV would become pricier. So would heating a giant house with coal and buying electricity from an inefficient power plant. But there’s one activity that’s not on the list and should be: eating a hamburger.

If it’s any consolation, I didn’t like writing that sentence any more than you liked reading it. But the evidence is strong. It’s not simply that meat is a contributor to global warming; it’s that it is a huge contributor. Larger, by a significant margin, than the global transportation sector.

According to a 2006 United Nations report, livestock accounts for 18 percent of worldwide greenhouse gas emissions. Some of meat’s contribution to climate change is intuitive. It’s more energy efficient to grow grain and feed it to people than it is to grow grain and turn it into feed that we give to calves until they become adults that we then slaughter to feed to people. Some of the contribution is gross. “Manure lagoons,” for instance, is the oddly evocative name for the acres of animal excrement that sit in the sun steaming nitrous oxide into the atmosphere. And some of it would make Bart Simpson chuckle. Cow gas—interestingly, it’s mainly burps, not farts—is a real player.

But the result isn’t funny at all: two researchers at the University of Chicago estimated that switching to a vegan diet would have a bigger impact than trading in your gas guzzler for a Prius. A study out of Carnegie Mellon University found that the average American would do less for the planet by switching to a totally local diet than by going vegetarian one day a week. That prompted Rajendra Pachauri, the head of the United Nations Intergovernmental Panel on Climate Change, to recommend that people give up meat one day a week to take pressure off the atmosphere. The response was quick and vicious. “How convenient for him,” was the inexplicable reply from a columnist at the Pittsburgh Tribune Review. “He’s a vegetarian.”

The visceral reaction against anyone questioning our God-given right to bathe in bacon has been enough to scare many in the environmental movement away from this issue. The National Resources Defense Council has a long page of suggestions for how you, too, can “fight global warming.” As you’d expect, “Drive Less” is in bold letters. There’s also an endorsement for “high-mileage cars such as hybrids and plug-in hybrids.” They advise that you weatherize your home, upgrade to more efficient appliances and even buy carbon offsets. The word “meat” is nowhere to be found.

That’s not an oversight. Telling people to give up burgers doesn’t poll well. Ben Adler, an urban policy writer, explored that in a December 2008 article for the American Prospect. He called environmental groups and asked them for their policy on meat consumption. “The Sierra Club isn’t opposed to eating meat,” was the clipped reply from a Sierra Club spokesman. “So that’s sort of the long and short of it.” And without pressure to address the costs of meat, politicians predictably are whiffing on the issue. The Waxman-Markey cap-and-trade bill, for instance, does nothing to address the emissions from livestock.

The pity of it is that compared with cars or appliances or heating your house, eating pasta on a night when you’d otherwise have made fajitas is easy. It doesn’t require a long commute on the bus or the disposable income to trade up to a Prius. It doesn’t mean you have to scrounge for change to buy a carbon offset. In fact, it saves money. It’s healthful. And it can be done immediately. A Montanan who drives 40 miles to work might not have the option to take public transportation. But he or she can probably pull off a veggie stew. A cash-strapped family might not be able buy a new dishwasher. But it might be able to replace meatballs with mac-and-cheese. That is the whole point behind the cheery PB&J Campaign, which reminds that “you can fight global warming by having a PB&J for lunch.” Given that PB&J is delicious, it’s not the world’s most onerous commitment.

It’s also worth saying that this is not a call for asceticism. It’s not a value judgment on anyone’s choices. Going vegetarian might not be as effective as going vegan, but it’s better than eating meat, and eating meat less is better than eating meat more. It would be a whole lot better for the planet if everyone eliminated one meat meal a week than if a small core of die-hards developed perfectly virtuous diets.

I’ve not had the willpower to eliminate bacon from my life entirely, and so I eliminated it from breakfast and lunch, and when that grew easier, pulled back further to allow myself five meat-based meals a month. And believe me, I enjoy the hell out of those five meals. But if we’re going to take global warming seriously, if we’re going to make crude oil more expensive and tank-size cars less practical, there’s no reason to ignore the impact of what we put on our plates.

Ezra Klein can be reached at kleine@washpost.com or through his blog.

This article originally appeared on washingtonpost.com.

38 Responses to The Meat of the Problem