Bhakti in the Business Place 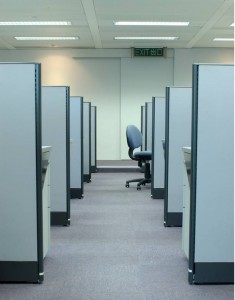 Although it would be nice to show up for a morning meeting with tilak on, conduct bhoga-arati at one’s desk, and circumambulate the office cubicles during an afternoon japa walk, the reality is that outward displays of religiosity are not welcomed in most work environments.

Indeed, speaking overtly about yuga-dharma, berating the boss’s egg-filled birthday cake, or recording the maha-mantra on the company’s answering machine are but a few things that could prompt a quick demotion or firing.  While these examples may be a bit far-fetched, devotees who work full time know that even more subtle expressions of spiritual life in the workplace can raise eyebrows. However, whether an eyebrow is raised suspiciously or, by contrast, inquisitively and favorably, is largely in control of the devotee.

Of course, “being a devotee” does not necessitate exhibiting the full-fledged external forms of devotional culture in every circumstance. Indeed, there is wide scope for making adjustments based on necessity, as well as practicality. A devotee who pursues traditional employment may have to use this latitude to avoid running afoul of professional expectations. The challenge then is how to remain preoccupied with the inner culture of bhakti, while externally “fitting in” to the culture of a particular workplace.

Thus while one might be tempted to slyly replace a co-worker’s telephone directory with a copy of Bhagavad-Gita, or to fill the receptionist’s candy jar with maha laddus, a more toned-down approach to creating a maximally favorable work environment is probably advisable, if not required. An understated approach to maintaining Vaishnava standards, however, may pique curiosity and draw favorable attention in ways, and to a degree, that overt outreach might not. In particular, those who exhibit one or more of the twenty-six qualities of a Vaishnava (as given in Caitanya-caritamrta) are likely to be regarded very warmly, as those qualities are ones that all people (even those who lack them) consider becoming, desirable, and worth cultivating (even if they don’t actively do so).

Thus, while the exhibiton of truthfulness, magnanimity, gravity, and so forth is a more subtle way of “being a devotee” at work than blasting a “Jaya Radha Madhava” ringtone from your Blackberry, such character attributes may prompt a co-worker to ask, “What’s your secret?” or “How did you become like that?” In that vein, I am often asked why I appear peaceful during times of workplace chaos. I typically respond by saying, “Well, believe it or not, I meditate everyday.”  Invariably my response raises eyebrows, but almost always in an approving way, and depending upon the precise circumstances, the conversation tends to deepen from there.

Frankly, even among the most progressive and educated segments of society, followers of Gaudiya Vaishnavism are not held in high esteem. In the face of entrenched negative sentiments, it is no wonder that many devotees feel they must be exceptionally discreet about their internal preoccupation with bhakti while on the job. It can be difficult to talk about one’s practice with any specificity, lest deep suspicion (however unwarranted) suddenly arise. Thus apart from fielding an occasional question about neck-beads, homemade lunches, or the reasons why he or she forgoes the standard coffee break, a devotee who works full-time may be reticent to voluntarily say much more.

Given that a devotee may spend in excess of half of his or her waking hours “associating” with co-workers, clients, or customers, the task of making external adjustments while avoiding compromise of the essential principles of bhakti may not be a trivial undertaking. The manner in which this is accomplished may vary as widely as circumstances of employment. Probably common to most situations, however, are occasional openings for the kinds of discussions that build bridges to more in-depth exchange, and serve as stepping stones towards a future in which the essential spirituality that is bhakti-yoga is well understood. Until then, it is likely that many devotees who work will have to vigorously apply themselves, such that the resulting qualities attract sympathetic (rather than wary) attention from others in the workplace—and possibly prompt the question, “How can I become more like you?”

56 Responses to Bhakti in the Business Place