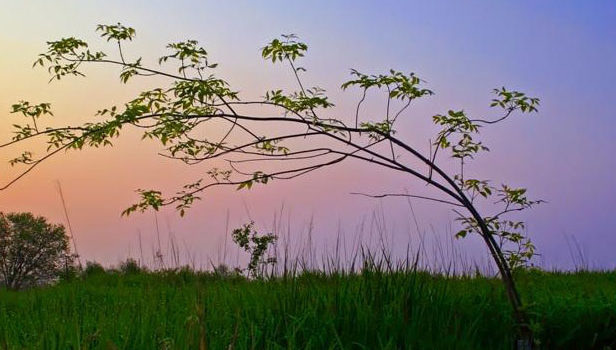 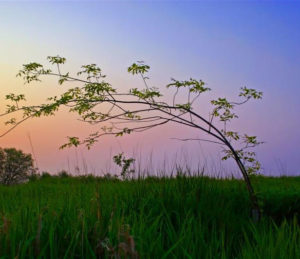 Lesson two in our classroom series discussing chapter three of Swami Tripurari’s Siksastakam of Sri Caitanya. San Rafael: Mandala, 2005. Swami will be responding to comments and questions while guiding readers through the text. Reader participation is encouraged.

Humility arising from the soul is a natural by-product of spiritual advancement. It begins to manifest at the stage of nistha. In nisthita bhajana-kriya the finite soul approaches the door of the infinite. Above the door a sign reads, kirtaniyah sada harih: “Always chant the name of Hari,” and the doormat to this threshold says, su-nicena: “Be humble.” At this junction between time and eternity—the finite and the infinite—a natural humility arises, as what it actually means to be finite is glimpsed for the first time. Here, finite is no longer a word but a realization, as is the humility it fosters. In his Siksastakam commentary, Thakura Bhaktivinoda describes this condition as innate humility arising out of complete detachment from sense enjoyment. The humility of the second verse, in contrast, arises out of remorse for one’s attachment for sense enjoyment.

Although nistha is an intermediate stage, that which we find in nistha is not inconsequential. Humility that appears in one who has something to be proud of is significant. The sense of humility attained in this stage carries the sadhaka into perfection and remains with him or her forever. Sriman Mahaprabhu has highlighted the example of Sri Rupa and Sanatana Goswamis for all sadhakas to take note of. After meeting them in Ramakeli, Mahaprabhu spoke of their humility to his other associates. He said, “Seeing and hearing their humility, a stone would melt. Being pleased, I told them, ‘Although you are exalted, you do not think yourselves so. Because of this, Krishna will soon liberate you.’ ”1

As with humility, there are two standards of tolerance. The first type of tolerance is described in the Gita. Sri Krishna tells Arjuna that he should tolerate material happiness and distress by understanding them for what they are. They are merely perceptions gathered by the senses, which the mind then deliberates on and determines to be good or bad, happy or sad, and so on. Our mind evaluates our experience as positive or negative and we live within the world of this mental determination. Rather than being tossed and turned by these mental calculations—avoiding the negative and pursuing the positive—we should cultivate tolerance within the context of spiritual practice, the fruit of which is experience of the nature of reality unfiltered by the mind. Such stoic, well-reasoned tolerance is an essential ingredient of basic spiritual practice.

One who aspires for your mercy while tolerating the result of past misdeeds and offering obeisances with words, heart, and actions is the heir to mukti and eternal service at your lotus feet.2

The devotee thinks, “Since a devotee is not entirely under the rule of karma and time, that which appears to be their influence in my life is actually Krishna’s personal arrangement (to help me advance spiritually). Bhagavan certainly knows what is best for me, whereas left to myself I do not. Thus it is out of his mercy for me that Bhagavan personally involves himself in my life, sometimes giving me happiness and sometimes giving me distress. He does this only in the course of engaging me in his service.” One who thinks like this becomes the recipient (daya-bhak) of two results: liberation and divine service (mukti-pada).

The word daya-bhak implies inheritance. As an inheritance from a parent maintains a child, so the attainment of liberation and divine service maintain the life of the devotee. This inheritance is not given all at once. It comes in installments, beginning in nisthita bhajana-kriya.3

Mahaprabhu’s example of the tree also speaks loudly of nistha, for in addition to being tolerant, a tree is firm, deep-rooted, and immovable. Nistha means fixed, uninterrupted by the call of the mind and senses. Ironically, the first two symptoms of one who is fixed in the sadhana of nama-dharma, humility and tolerance, involve considerable flexibility.

Bhaktivinoda Thåkura has explained that the tolerance mentioned in Siksastakam includes mercy. He has drawn this from Mahaprabhu’s own explanation of the tree’s tolerance. While tolerating the elements or when being cut down, the tree gives mercy to others. In his Gitavali, Bhaktivinoda Thakura writes that when one becomes tolerant like a tree one will turn from violence and give protection to others. In his Sri Sanmodana-bhasyam, he describes this quality of tolerance as pure compassion free from envy.

Although the qualities of humility and tolerance ornament the sadhaka and identify him or her as a sadhu, at the stage of nistha the sadhaka is free from egotism and thus is not attached to the respect that others offer. Such a serious sadhaka avoids the pride of being a sadhu. To avoid this respect, and because of seeing every living being as the resting place of God, a naisthiki-bhakta offers all respect to others in ways appropriate to their embodiment.

In concluding our discussion, it must be emphasized that this third verse of Siksastakam is about eligibility for attaining prema. While initial eligibility for treading the path of Krishna bhakti involves only faith, because this verse is about firm faith—nistha—it speaks of further eligibility in the form of appropriate decorum and disposition. This further eligibility is in contrast to the word durdaivam in the previous verse, which indicates that one at the stage before nistha still has misbehavior based on false values. One’s misfortune before nistha is that owing to this misbehavior one does not develop attachment to nama-sankirtana. Among all types of anarthas arising from this misbehavior, offenses to Krishna nama are the most damaging. Thakura Bhaktivinoda writes in the eighth stanza of his poem “Saranagati”, “My durdaiva (misbehavior) is the ten offenses.” Fortunately, these sins of the soul can be remedied by the attentive chanting that occurs at the stage of nistha—kirtaniyah sada harih—which clears one’s path to prema.

Because the higher stages of bhakti cannot be attained without first coming to the stage of offenseless chanting, Mahaprabhu’s followers have highlighted this verse and the stage of nistha, pointing to it as an interim goal to aspire for in pursuit of prema. Without nistha—without humility, tolerance, pridelessness, and attentive chanting—there will be no prema. The naisthiki-bhakta exercises appropriate discrimination and thus clearly understands the difference between kama and prema. Having left kama behind, he or she looks only forward with both eyes fixed on the goal.