Review: Jesus in the Lotus 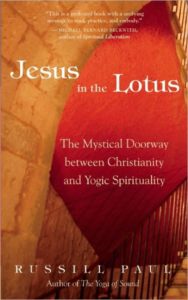 Russill Paul argues persuasively that Christianity and Hinduism each has something valuable to offer the other, despite centuries of misunderstanding and mistrust.

A native of India, Paul now resides in Texas. He was raised Roman Catholic, and at age nineteen decided to become a Catholic monk and yogi under the guidance of Bede Griffith, a widely admired Benedictine monk and mystic who founded a Hindu-Christian ashram in India.

Paul posits that all religious and spiritual traditions have a mystical core that seeks to connect humans “directly with the Divine presence and the vast mystery of the cosmos.”

Although Christianity is the world’s largest religion, with more than two billion adherents, many Christians today are looking to the East, particularly to Yoga, an offshoot of Hinduism, for spiritual fulfillment, Paul says. Living with Bede Griffiths for several years proved to be a profound, life-changing experience for Paul, who immersed himself in Christian and Hindu studies and meditated for long periods. Intense spiritual encounters, including an out-of-body experience, were mixed with dark nights of the soul. At one point Paul sat in a lotus position and pleaded with God to reveal himself, using “every psychological trick in the book to convince God that I wanted to see him, face-to-face, just once.”

The next day he was overwhelmed by a powerful flow of energy. He could barely speak, and hardly slept or ate for weeks. Slowly, he resumed meditation and Yoga practice, but it was months before he returned to a normal routine. “Something had shifted deep within me,” he writes, “and I continued to feel the effects, like the aftermath of a psychic earthquake or tsunami.” Paul is better at recounting this intense experience than in telling us what it means. Did he interpret the energy field to be God speaking to him? He does not say, other than offering a vague acknowledgement of connecting with “a beingness that was definitely not human.”

The author eventually decided he was not cut out to be a monk. He decided to marry and move to America, where he leads workshops and conducts three-week pilgrimages to the Indian ashram where he lived with Bede Griffiths, who died in 1993. The ashram houses a distinctive sculpture of four life-sized figures of Jesus sitting in meditative postures inside a lotus flower, an important Hindu symbol—hence the book’s title.

Paul describes the similar mystical cores of Christianity and Hinduism, as well as their differences. He offers pointed criticisms of each tradition and argues that each can learn from the other.

He says that God’s command to Adam to be fruitful and multiply and to fill and subdue the earth has led to the destruction of natural resources and intolerance toward indigenous spiritual practices. Negative concepts such as the anti-Christ, the devil, eternal punishment, and sinfulness offend many people, non-Christians and Christians alike. “The language of Christianity,” Paul writes, “is often divisive and unhealthy, having been formulated from a position of superiority and prejudice toward other traditions.”

Conversely, Paul often is struck by the anti-Christian prejudice he encounters as he travels and meets other Yoga practitioners.

Each religion must look deeper at what the other has to offer, Paul says. Eastern traditions can learn from Christians about the importance of loving one’s neighbors, while Christians can benefit from the yogic practice of deep concentration as a way to draw closer to God.

Paul offers a balanced approach regarding mysticism vs. traditional religion. “On the one hand,” he writes, “many today feel a desperate need to connect with the Divine essence that exists independently of religious and spiritual traditions. On the other hand, we cannot do away with established religion. Religious traditions, as forms, really do matter.”

Paul is a sharp critic of Western materialism, which is based on the joy of having possessions, contrasted with yogic spirituality, which emphasizes the simple joy of being. Even when Indians are starving or living in poverty, they “have an unmistakable joy in their sense of being that is conspicuously absent in the West.”

Ancient Indian yogis and Christian mystics had much in common. Both “rebelled against institutional religion and sought a direct personal experience of the Divine.”

Paul praises the work of Wayne Teasdale, an American-born lay Catholic monk and Hindu practitioner who preached that religions could remain distinctive while celebrating their common eternal truths. Before his untimely death in 2004, Teasdale wrote several books, including The Mystic Heart: Finding a Universal Spirituality in the World’s Religions.

The accessible wisdom of Jesus in the Lotus is similar to that found in The Mystic Heart. One comes away from this new book believing that Paul is a worthy successor to Bede Griffiths and Wayne Teasdale—two mystics who had such a lasting influence on him.

20 Responses to Review: Jesus in the Lotus