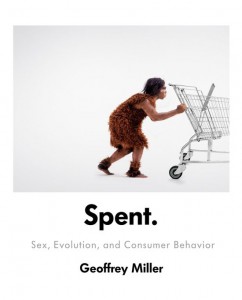 Sex, Darwin, capitalism. Geoffrey Miller’s second book certainly ticks off some major search terms. His first, The Mating Mind, put forward the case for sexual choice as a major driving force in our evolution, and demonstrated the huge influence this had on human nature. Spent picks up where that book left off, applying evolutionary psychology to consumerism.

At the heart of the book is a simple idea: we have evolved extremely efficient methods for signaling our fitness to potential mates. Intelligence, health, fertility, beauty, conscientiousness, agreeableness, and openness to novelty, to name a few, can all be assessed remarkably quickly through conversation and observation. However, instead of trusting that we already have everything we need to impress our fellow humans, we have become convinced that something beyond our naked bodies and minds is required to be socially acceptable and sexually attractive.

This idea may be simple, but the power of Spent comes from its exhaustive examination of its causes and consequences. Miller is an erudite, amusing, and fascinating guide through the world of conspicuous consumption, personality traits, marketing, and advertising. He possesses the keen eye of a scientist combined with the prose style of a great essayist.

As he explains early on, he has two aims. Firstly, to describe human culture with a biological context and, secondly, to suggest ways we could change it so it “combines the best natural features of prehistoric life and the best inventions of modern life.” There is something radical even in this. The idea that ‘ought’ statements should not be derived from ‘is’ statements has long been leveled against evolutionary psychologists. It is argued that because a given behavior in humans has been explained, it has been condoned. This accusation is almost always inaccurate and stems from either willful or genuine misunderstanding, and evolutionary psychologists are quick to point out the mistake. Geoffrey Miller, however, is boldly taking this supposedly prohibited step. He hopes that by improving our understanding of human behavior, and particularly human trait display, we can foster the conditions that most suit it. His ‘is’ is trait display, and his ‘ought’ is a world where money and objects no longer act as ersatz fitness indicators, and where we are free from the ‘consumerist treadmill’.

In the first half of the book Miller demonstrates with painful clarity the true nature of our conspicuous consumption: we strive for the best-paid job we can get and use the money we earn to buy goods and services at full price despite the existence of cheaper substitutes. We have become convinced that these are required in order to impress a desired mate, yet as a self-display strategy it is inefficient: our evolved fitness-indicators have been tried and tested over millions of years. In the second half he offers an alternative: develop social norms which allow us to express our fitness through methods both more efficient and more suited to our individual talents and desires. His two suggestions for achieving this are, firstly, communities differentiated by intellectual, political and social values rather than by income and, secondly, consumption tax to compensate for the side effects of our spending. The chapter in which most of these reforms are laid out, “Legalizing Freedom”, deserves to be published as a pamphlet in its own right, so neat and so revolutionary are the ideas it contains.

The foundations on which Miller builds in Spent are Darwin’s The Descent of Man and Veblen’s Theory of the Leisure Class, and he also name-checks writers of philosophy, psychology, marketing, and pop-culture. Yet one of the many strengths of Miller’s book is that his research and extensive reading never slow down the pace, and the prose is unencumbered by footnotes or references. Even the bibliography reflects this relaxed style, organised as it is by theme rather than page number, and including not just academic works, but films and novels such as The Matrix and Fight Club.

If Spent is read carefully and with an open mind, it will improve your understanding of human nature and leave you with the tools to cast a cynical eye on the near-ubiquitous conspicuous consumption of the Western world. And if enough people read Spent the changes Miller hopes for may start to take effect. In the meantime, if you are looking for a portable, cheap, intelligence indicator, you couldn’t do better than a copy of this thought-provoking book.