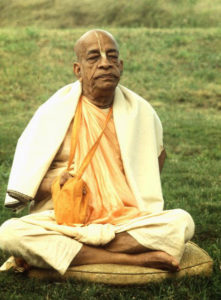 Lesson one in our classroom series discussing chapter four of Swami Tripurari’s Siksastakam of Sri Caitanya. San Rafael: Mandala, 2005. Swami will be responding to comments and questions while guiding readers through the text. Reader participation is encouraged.

The venerable Krsnadasa Kaviraja Goswami writes that after Mahaprabhu spoke the third verse of his Siksastakam, his humility grew and he prayed for pure devotion.1 Gaura Krishna’s love increased his humility, and his humility increased his love. Kaviraja Mahasaya comments that this is the nature of love: the devotee who has love feels that he or she doesn’t have even a scent of it.((CC. 3.20.28.))

After the heart is cleansed of the principal anarthas and sadhana becomes undeterred, the sadhaka develops a natural liking for nama-sankirtana. What was previously medicine now becomes food. Undeterred (apratihata) devotion becomes unmotivated (ahaituki) as well. This stage is known as ruci (taste), in which the sadhaka becomes attached to devotion itself unadulterated by fruitive desires or the desire for liberation. Thus the sadhaka has no interest in anything other than continued hearing and chanting in pure devotion, suddha-bhakti. The sadhaka’s prayerful attitude begins to turn from submission in pursuit of spiritual emotion to an emotional life of spiritual longing.2

In this fourth verse Mahaprabhu describes ruci in terms of its tatastha-laksana (marginal characteristics) and svarupa-laksana (principal characteristics). Its tatastha-laksana is freedom from ulterior motive, and its svarupa-laksana is attachment to bhakti. Thus it is practically synonymous with suddha-bhakti as defined by Srila Rupa Goswami.3 Sri Rupa explains that suddha-bhakti is characterized marginally as being unencumbered by desire for liberation, worldly achievement, or anything other than the pleasure of Krishna. Its principal characteristic is a spirit of devotion favorable to Krishna.4

Mahaprabhu describes ruci-bhakti’s marginal characteristics when he says that he has no desire for wealth (na dhanam). This means that he has no desire for economic development (artha) and by extension no desire for the wealth of religiosity (dharma).5 When Mahaprabhu says he has no desire for followers (na janam), this includes attachment to husband or wife, children, friends, and the like, on which one spends one’s money for sense enjoyment (kama). Sense enjoyment is also underscored here by the word sundarim, which literally means “beautiful” and thus represents the most formidable sense desire, the desire for companionship. As with artha and dharma, Mahaprabhu says he has no desire for kama (na janam na sundarim). Nor does he have any desire for material knowledge or the arts (kavitam va). All this falls within the realm of karma. As Mahaprabhu has no interest in the realm of karma, similarly he has no interest in the knowledge that leads to liberation from this realm. The word kavitam in this verse can refer either to material knowledge or to knowledge that leads to liberation from material existence. The words janmani janmani refer to freedom from birth and death and therefore indicate moksa, or liberation.

Thus we find the four goals of humanity—dharma, artha, kama, and moksa—represented in this verse. These four values, the so-called four purusarthas, or human (purusa) necessities/ideals (artha), include the entire range of human activities as well as transcendence of the human experience. Gaura Krishna and the sadhaka who has attained the stage of ruci have no desire for any of them.

5 Responses to The Taste of Ruci