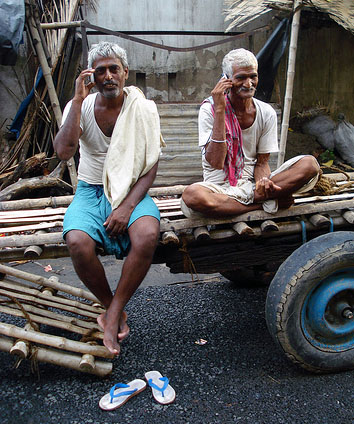 In the 1960s, literary and media critic Marshall McLuhan coined the phrase “global village” to describe the extension of people’s frames of reference and sense of responsibility beyond their immediate surroundings, or “village.” This growing sense of connectedness, McLuhan proposed, is the natural result of a world in which electronics enable our senses (at least the senses of sight and hearing—for now) to immediately experience that which is taking place across the globe, just as we would in our village.

McLuhan had high hopes for such a global community: “The aspiration of our time for wholeness, empathy, and depth of awareness is a natural adjunct of electric technology.”

McLuhan passed away in 1980 as the precursors to the Internet were being formulated, implemented, and refined, but still nine years before the start-up of the first commercial Internet Service Provider. With the Internet now in full swing, it is apparent to all that the global village finds its most relevant discussion there. Indeed, in its most common usage, “global village” has come to refer to the Internet alone.

Everybody has found their way to the Internet; practically every belief, interest, desire, and product has some representation on the Web. It is therefore not surprising that Gaudiya Vaishnavas have also made their way into the online village. After all, with a spiritual aspiration culminating in a bucolic life, one would expect us to gravitate towards village settings, and in this case—for better or for worse—we have.

The prospect of Gaudiya Vedanta circulating throughout the global village and thereby reaching people of every background is wonderful. Such an opportunity would no doubt make Bhaktisiddhanta Saraswati’s brhat-mrdunga reverberate with sounds of joy. But as with any medium one might employ in promoting spiritual life, the Internet is a double-edged sword, and unfortunately, many of those who have a hand on the hilt are swinging—and thinking—in the wrong direction.

Fortunately, within the Gaudiya tradition one need not look hard for examples of how to properly conduct him or herself in a village (even a global one). Perhaps the most relevant example is that which took place as Caitanya Mahaprabhu was putting Raghunatha dasa Goswami under the care of Svarupa Damodara, first leaving Raghunatha with a few practical instructions:

Don’t indulge in village talk, don’t hear village talk. Try your best to avoid mundane matters. Don’t eat delicious dishes, but take whatever ordinary food may come of its own accord; and don’t dress luxuriously.

Such seemingly unexceptional instructions are not to be overlooked, and their significance is magnified when we consider the person of Raghunatha dasa Goswami. Dasa Goswami is considered the prayojana-tattva acarya of the entire Gaudiya tradition. That is to say, he is the foremost teacher (acarya) of the truths (tattva) regarding the ultimate goal (prayojana) of the prema-bhakti marga (the path of pure devotion). Furthermore, these instructions came as Raghunatha dasa was being handed into the care of Svarupa Damodara, who is Lalita-sakhi herself, and is therefore privy to the most esoteric aspects of Mahaprabhu and Radha-Krishna. Thus Raghunatha dasa was fully qualified for a life in which such instructions are irrelevant.

Nevertheless, the very first directive Mahaprabhu gave to Raghunatha dasa Goswami was that one should not partake in village talk (gramya-katha) nor (one can safely assume), by extension, global village talk—and village type.

Obviously the Internet did not introduce gossip (nor is it reasonable to expect exclusively spiritual discussions), but what is alarming is that via the Internet, devotees seem far more likely to advance the malicious, spiritually detrimental variety of gossip. Just how spiritually dangerous such behavior is depends on a number of factors, one of which being the environment in which one makes the attack. For better or worse, the global village has a liberal publishing policy, and as such, every opinion, no matter how outlandish or downright tasteless, has the potential to reach everybody. The widespread dissemination of slanderous comments and malevolent attitudes, which are inevitably met with the support of some, is truly toxic, and the effects can be observed throughout the Internet community. A prime example is the overabundance of conjectured “siddhantas” appearing daily on the Web.

A digital community is largely reflective of its physical counterpart, for people’s natures manifest through whatever medium they use. Unfortunately, the present nature of the international Gaudiya community is that many are unable to interact with each other in a healthy, respectful manner, and as such there are many fractured factions. Much of the negative attitudes underlying these divisions are the direct results of years of one group or another espousing their exclusive validity and the simultaneous inferiority of people and groups who may actually be worthy of their adoration. This infighting has been notably amplified by the Internet, which instantly provides each user with a more public voice than was previously available to actual public figures.

The virtual nature of relationships on the Internet lends itself to an environment wherein criticism, rumors, personal attacks, and outright lies flourish. This is aided by the fact that the Internet provides the anonymity to both produce and digest these vitriolic discussions without being subject to any of the scrutiny which the participants themselves liberally employ in their assessment of everyone else. Such unaccountability and hypocrisy stands in the way of even basic morality, what to speak of the type of character by which one becomes attractive to those of spiritual substance.

It would be naive to think that fanatics and those with envious hearts will ever fall silent (especially on the Internet), but that fact merely underscores the responsibility of the rest of us to engage each other in thoughtful, substantial, humble, and generous dialogue. It is the generosity and user-friendly nature of the bhakti-marga that not only acknowledges the positive contributions of worldly progress, but enables us to actually use such contributions in the context of spiritual progress. Perhaps we should respond in kind.

Marshall McLuhan was able to see the potential of technology to function as a source of positive change in the world, while Bhaktisiddhanta and other acaryas take technology’s worth even further: acknowledging its potential to take one beyond the world. Just as McLuhan proposed, the internet can be a way to extend our frame of reference and sense of responsibility, both materially and spiritually. It is our duty to recognize the opportunity and responsibility sitting on our desks, and strive to act accordingly.