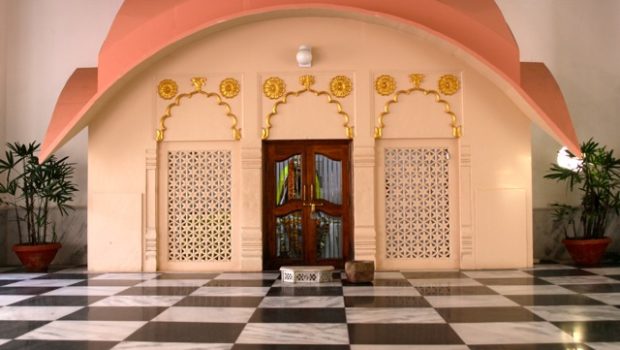 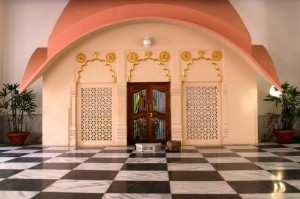 The auspicious month of Kartika saw many thousands of fortunate devotees coming to Vrindavan from around the world. One who spends the month of Kartika in Vrindavan is indeed very fortunate. This is especially so for those who worship the form of Damodara during that month.

“Therefore, O prince, nothing is better than to serve Damodara in Mathura during Kartika.” (Mathura-mahatmya)

“One should regularly recite the prayer called ‘Damodarastakam’, which was composed by Satyavrata, which attracts Lord Damodara, and which describes the worship of Lord Damodara.” (Hari-bhakti-vilasa)

Of the seven primary temples in Vrindavan, Sri Sri Radha Damodara Mandir is the one where literally thousands of devotees come daily for darsana, both morning and evening, during Kartika. The shelter of Sri Sri Radha Damodara that the devotees feel in their hearts is beautifully expressed in the following sloka composed by A. C. Bhaktivedanta Swami Prabhupada:

“Vrindavana is a charming place, and situated there, in the grove known as Seva-kunja, is the sacred temple of Sri Sri Radha Damodara. I take the lotus feet of these deities as my only shelter, and I petition them to be kind upon me and guide me to life’s ultimate goal.”

Throughout the month, regular devotees and visiting kirtan parties sang “Damodarastakam,” often more than once. Thousands of lamps were lit every morning and evening and the deities were offered new crowns and dresses, flower garlands, jewels, incense, and other articles for worship. Enthusiastic devotees swept and cleaned the temple every day and this gave rise to a certain sloka that has now been adopted as the temple motto.

During Kartika the following festival days saw significant more numbers of devotees visiting the temple: B. R. Sridhara Dev-Goswami’s Tirobhava, Diwali, Annakut/Govardhan-puja, A. C. Bhaktivedanta Swami Prabhupada’s Tirobhava, Ekadasi, and especially the last day of Kartika, known as Maha-rasa, or Rasa-purnima. It was indeed an experience of a lifetime to see the throngs of devotees, especially on festival days, coming to visit Sri Sri Radha Damodara.

This year’s Kartika also saw the completion of the kirtan hall in front of the samadhi and bhajan-kutir of Sri Rupa Goswamipada. The hall was completed in the second week of Kartika after five months of hectic construction. 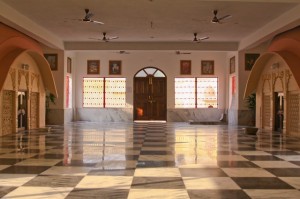 Although two weeks behind schedule, when finally opened to welcome the numerous kirtan parties that come to pay their humble respects to Sri Rupa, the hall was very beautiful and greatly appreciated by everyone.

At first the new construction came as somewhat of a shock to some. After a lifetime of seeing Rupa Goswami’s samadhi standing alone in the greater courtyard of the temple, the new addition required an adjustment for some visitors. But the vast majority of devotees certainly did appreciate the addition and many commented how the kirtan hall was a great service to the acaryas of our parampara and the followers of Rupa Goswami.

It was very warming to the heart to see devotees enter the new kirtan hall and realize that they could now sit down and spend quality time in front of Rupa Goswami without the fear of being attacked by monkeys (a serious problem in the past), or being disturbed by sun, rain, heat, cold, or mosquitoes. Many devotees took advantage of this new environment and spent hours everyday chanting in front of the samadhi of Sri Rupa.

This year also marked the installation of a classic black and white marble floor in the main darsana hall of the temple, which now matches the floor in front of the samadhi and bhajan-kutir. Other improvements have also been planned for the near future. First on the list is the renovation of the temple gate and the reception area.

Our readers can visit the following websites if they wish to be regularly informed about the projects and progress being made at Sri Sri Radha Damodara temple in Vrindavan.