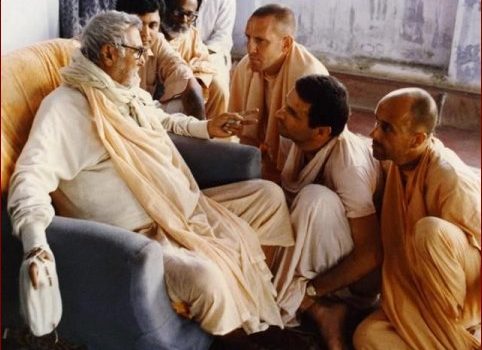 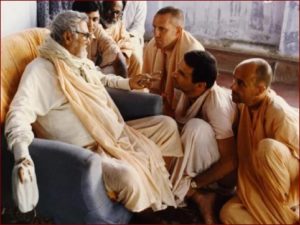 In the first portion of chapter 4, Swami B. B. Visnu presents Srila Prabhupada’s instructions regarding his disciples’ relationship with Srila Sridhara Maharaja. These directions are further verified by quotes from leading members of Iskcon during the period under discussion.

Prabhupada gave us an instruction that if we have any difficulty then we should come to you, but they are deliberately neglecting that instruction of Srila Prabhupada.

In addition, official GBC recognition of this instruction of Srila Prabhupada was given in the GBC’s March 1981 publication, “The Descending Process of Selecting a Spiritual Master.” Giriraja Maharaja, in a letter of September 16, 1978 addressed to all GBC members, wrote,

So both in terms of relative rank and absolute realization, Sridhara Swami is far beyond any of us. Recently, I have heard statements to the effect that we have now surpassed Sridhara Swami and that we are in the position where we can improve upon Sridhara Swami’s conception. In this connection, I am simply reminded of the words of Sri Caitanya Mahaprabhu, svami na mane yei jana vesyara bhitare, tare kariye ganana, that we must remain faithful to our Swami (otherwise we will be prostitutes).1

In regard to Srila Sridhara Maharaja, Srila Prabhupada’s disciples said:

[Prabhupada said] If there was question we should approach you. (Jayapataka Maharaja, tape, March 1978)

We should go to his godbrother Sridhara Maharaja for guidance. So this talk of October 21, 1980 certainly showed the GBC doing this, and Srila Sridhara Maharaja fulfilling this role, as Prabhupada requested he do for the disciples of Srila Prabhupada. (Satsvarupa Maharaja, tape, December 22, 1980)

Our Guru Maharaja was kind upon us, so you are kind upon us. I find no difference at all in how you are blessing us. When I used to come every year to Mayapur, my whole purpose in coming was fulfilled when I would be in his association. So similarly, now I am feeling that as I have come here, that my purpose is being fulfilled, whenever I am in your association. (Tamala Krishna Maharaja, tape, February 26, 1981)

I take it that Prabhupada is speaking to us through you. (Ramesvara Swami, tape, March 5, 1981)

Prabhupada told me twice, “Everything I know, I learned from Sridhara Maharaja.” (Hamsaduta dasa)

Maharaja, time will prove that they [Iskcon leaders] are wrong, and you are right. (Bhakti Caru Swami, tape, February 1982)

…who is the most highly competent of all my godbrothers. This is B. R. Sridhara Maharaja, whom I consider to be even my siksa guru . If you are serious about the advancement of your spiritual life, I advise you to go to Sridhara Maharaja and I will feel that you are safe. You can also make arrangements for your other godbrothers to go there in the future.2

What Sripada Sridhara Maharaja has directed, I take it on my head.It is appropriate that I should accept his direction.3

What Govinda Maharaja has said is true. I consider his guru as my siksa guru .4

Those who are intelligent, they are making something, Sridhara Maharaja and others.5

One of my important godbrothers [Sridhara Maharaja] says. He’s sincere. He says, “The prediction of Caitanya-caritamrta, prthivite ache yata nagaradi-grama, so you have done it.”6

Our relationship is very intimate. After the breakdown of the Gaudiya Matha I wanted to organize another organization making Sridhara Maharaja as the head.7

Over the years, various facts have mysteriously changed, according to the political climate. Statements included in this book are substantiated with hard copy and tape recordings. Understandably, one may change his opinion regarding certain things, but this does not change the essential facts, the actual truth, satyam param dhimahi.