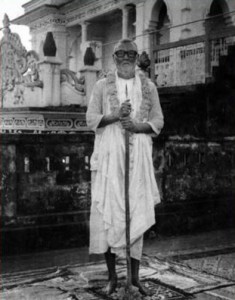 In the second portion of chapter 4, Swami B. B. Visnu addresses what is often considered the primary evidence that Srila Prabhupada did not want his students associating with Srila Sridhara Maharaja.

Please accept my blessings. I beg to acknowledge receipt of your letter of April 17, from Washington D.C. and I have very carefully noted the contents.

You are right about Sridhara Maharaja’s genuineness. But in my opinion he is the best of the lot. He is my old friend, at least he executes the regulative principles of devotional service. I do not wish to discuss about activities of my godbrothers but it is a fact they have no life for preaching work. All are satisfied with a place for residence in the name of a temple, they engage disciples to get foodstuff by transcendental devices and eat and sleep. They have no idea or brain how to broadcast the cult of Sri Caitanya Mahaprabhu. My Guru Maharaja used to lament many times for this reason and he thought if one man at least had understood the principle of preaching then his mission would achieve success. In the latter days of my Guru Maharaja, he was very disgusted. Actually, he left this world earlier, otherwise he would have continued to live for more years. Still he requested his disciples to form a strong governing body for preaching the cult of Caitanya Mahaprabhu. He never recommended anyone to be acarya of the Gaudiya Matha. But Sridhara Maharaja is responsible for disobeying this order of Guru Maharaja, and he and others who are already dead, unnecessarily thought that there must be one acarya . If Guru Maharaja could have seen someone who was qualified at that time to be acarya he would have mentioned. Because on the night before he passed away he talked of so many things, but never mentioned an acarya . His idea was acarya was not to be nominated amongst the governing body. He said openly you make a GBC and conduct the mission. So his idea was that a self-effulgent acarya would be automatically selected from amongst the successful members of the GBC. So Sridhara Maharaja and his two associate gentlemen unauthorizedly selected one acarya and later it proved a failure. The result is now everyone is claiming to be acarya even though they may be kanistha-adhikari with no ability to preach. In some of the camps, the acarya is being changed three times a year. Therefore we may not commit the same mistake in our Iskcon camp. Actually amongst my godbrothers no one is qualified to become acarya . So it is better not to mix with my godbrothers very intimately because instead of inspiring our students and disciples they may sometimes pollute them. This attempt was made previously by them, especially [names three sannyasi godbrothers] but somehow or other I saved the situation. This is going on. We shall be very careful about them and not mix with them. This is my instruction to you all. They cannot help us in our movement, but they are very competent to harm our natural progress. So we must be very careful about them.

When there is a conflict between opposing statements, they must be reconciled. Rupa Goswami has written:

When two scriptural statements contradict each other, one is not taken as inauthentic. One should give the meaning in such a way that the contradiction is removed.1

Our relationship is very intimate. After the breakdown of the Gaudiya Matha, I wanted to organize another organization, making Sridhara Maharaja the head. (March 1973)

Unfortunately, taking the Rupanuga letter out of its true historical context, a handful of leaders have attempted to utilize it in order to discredit the deep and intimate relationship between Srila Sridhara Maharaja and Srila Prabhupada. Some of these leaders are fully aware of this deep relationship. Neither have we seen the letter written to Srila Prabhupada that elicited this response. A careful study of Prabhupada’s many letters shows that quite often his letters are direct responses to particular circumstances and may even contradict other instructions in different situations.

The War Is Over

In spite of Srila Prabhupada’s sometimes strong criticism of his godbrothers, he also wrote positively about them:

Even amongst our godbrothers we have misunderstanding, but none of us is astray from the service of Krishna. My Guru Maharaja ordered us to execute his mission combinedly. Unfortunately, we are now separated. But none of us have stopped preaching Krishna consciousness. Even there was misunderstanding amongst the godbrothers of my Guru Maharaja, none of them deviated from the transcendental loving service of Krishna.2

The disciples of Srila Bhaktisiddhanta Saraswati Goswami are all godbrothers, and although there are some differences of opinion and we are not acting conjointly, every one of us is spreading this Krishna consciousness movement according to his capacity and producing many disciples to spread it all over the world. (Srimad-Bhagavatam 4.28.31)

So far as your question about controversy amongst the disciples of Bhaktisiddhanta Saraswati Goswami Maharaja, that is a fact. But this controversy is not material. Just like in a national program, different political parties are sometimes in conflict and make propaganda against each other, but their central point is always service to the country. Similarly, amongst the disciples of Bhaktisiddhanta Saraswati there may be some controversy, but the central point is how to preach the mission of His Divine Grace.3

The above letter to Brahmananda was written early on, subsequent to which there were many problems with Srila Prabhupada’s godbrothers. The above purport, however, was written quite a bit later.

Srila Prabhupada also said, “The war is over now,” and he created the Bhaktivedanta Swami Charity Trust for developing Gauda-mandala-bhumi and encouraging better relations and cooperation between Iskcon and Srila Prabhupada’s godbrothers. Specifically, Srila Prabhupada instructed that this trust construct a kirtana hall at Srila Sridhara Maharaja’s matha and also one at the birthplace of Sri Caitanya Mahaprabhu, Yoga-pitha.