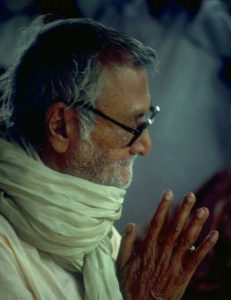 B. B. Visnu Maharaja offers revealing and endearing quotations from Srila Prabhupada and Srila Sridhara Maharaja.

Srila Sridhara Maharaja has on numerous occasions resolved problems that arose between Srila Prabhupada and his godbrothers. An example of this is the controversy that arose amongst Prabhupada’s godbrothers when his disciples began addressing him as “Prabhupada,” and later chanting “Jaya Prabhupada” in his glorification.

Some of Srila Prabhupada’s disciples, in the early days of Iskcon, while visiting the Caitanya Saraswat Matha, heard Akincana Krsnadasa Babaji Maharaja chant Prabhupada-padma stavaka composed by Srila Sridhara Maharaja. At the end he started singing “Jaya Prabhupada, Jaya Prabhupada” (in glorification of Srila Bhaktisiddhanta Saraswati Thakura). The disciples of A. C. Bhaktivedanta Swami Prabhupada liked this chanting of “Jaya Prabhupada” very much and introduced it in all of Prabhupada’s temples. When Prabhupada’s godbrothers heard of our usage of “Prabhupada,” they raised strong objections.1 It was Sridhara Maharaja who explained to them that it was written in the sastra that the disciple should pronounce the name of his guru with the titles, “om visnupada, prabhupada, etc.” He explained that since “our Srila Prabhupada” was actually fulfilling the desires of “their Srila Prabhupada,” he deserved this title, which was reserved for great personalities.

With much difficulty, I translate the books at night and they print them and sell them, and send seventy, eighty thousand dollars every month to me here. Is India benefiting from this or losing something? But they are falsely accusing them of being CIA agents. Tirtha Maharaja used to say, “The American government has given Swamiji two million dollars.” As if the American government didn’t have anything better to do or couldn’t find a better person to give the money to. So, for making the devotees chant Hare Krishna and dance, they would give me the money, two million dollars.

A man from the Central Intelligence Department took initiation from me. He was asking me about your movement. I told him, “These are nothing but rumors. I have known Swami Maharaja for a long time. I know him very well, and this movement is nothing but a purely spiritual movement.” Actually, what they are thinking is that previously they [the British] used to send the missionaries, then they used to send the merchants, and finally the army used to come and take over, but those days are no more. Christianity has become much less effective now.

After the disappearance of Srila Prabhupada, Srila Sridhara Maharaja declared:

I consider him saktyavesa-avatara, and it is confirmed in his writings on his spiritual journey through the Atlantic. How he landed there in America, and the nature of his beginning the movement, his intense degree of dedication to Krishna and dependence, and how much he made himself empty of any other desire than the order of his gurudeva quite empty that Krishna came down to help him, and it is corroborated that Krishna worked on his behalf. In his poem, “Prayer to the Lotus Feet of Krishna,” we find him pleading with Krishna, “My dear brother, your good fortune will come to you only when Srimati Radharani becomes pleased with you.” Seeing his gurudeva, Srila Bhaktisiddhanta Saraswati, as Radharani’s delegation and his order as her divine service, he humbly submitted that he did not feel himself worthy or fit to discharge the divine service, so he enlisted Krishna in the service of his guru. He had completely dedicated himself to the purpose, he was so earnest in his prayer to Krishna that he may discharge the duty that he has been given by his Guru Maharaja, that divine force, power, came down to help him. Otherwise, it is impossible. It is not a thing of the ordinary level that anyone can do—take the highest thing [Krishna consciousness] to the lowest position [fallen souls] so extensively. It cannot but be the divine power, embodied and in a great intensity and magnitude! So, saktyavesa-avatara, I cannot but take him to be so.

When asked what the vision of Iskcon should be, Srila Sridhara Maharaja replied with an explanation of a prayer of Raghunatha dasa Goswami:

nama srestham manum api saci-putram atra svarupam, I am fully indebted to sri gurudeva . Why? He has given me so many things: the highest conception of the holy name of Krishna, the highest form of sound which contains the highest form of thought, aspiration, ideal, everything. And he has given me the service of our great savior, Sri Caitanya Mahaprabhu, and his dearmost assistant, Svarupa Damodara. He has brought me in connection with Sri Rupa, who was ordered to distribute the heart’s innermost dealings, the highest devotional love, raganuga-bhakti. Gurudeva has given me Srila Sanatana Goswami, who gives us sambandha-jnana, a proper acquaintance with the environment, and he has given me Mathura Mandala, which will help me in my remembrance of Radha and Govinda wherever I shall cast my glance. By his grace, gurudeva has revealed the superexcellent position of Radha-kunda, the favorite place of Radha and Govinda for their pastimes and this great Govardhana. Lastly, he has given me the hope that one day I can get the service of Sri Sri Radhika and Madhava. I have been given all these assurances by my gurudeva, so I bow my head with all my respects to his lotus feet. If we are conscious of all these spiritual matters, we can think that we have approached our gurudeva properly. What is our guru? What is his mission? It is filled with all these things. Devoid of that, what is our interest?

Iskcon must not deviate from this line. We have not come here to deceive ourselves, but to fulfill ourselves. Iskcon will fulfill everyone’s inner demand, even extending to the vegetables and stones, taking them to the feet of Mahaprabhu and the Goswamis. From village to village, everyone, in every place, should be hunted and approached, “Take the name of Krishna! Come under the flag of Mahaprabhu!” This grand worldwide mission will thrive like anything; it will touch the heavens and cover the earth, and other planets also. That was the aim of Bhaktivedanta Swami Prabhupada, and we understand and appreciate that.

I heard from different people that Swami Maharaja has told his disciples that in Bengal most of the disciples of Srila Bhaktisiddhanta Saraswati Thakura have deviated from his teachings. So, now you have to go and reinstate them there. Giving such inspiration, he sent them there. I have not heard it from him myself. I simply heard it from others, and in a way, I think, it is quite possible that he said this to his disciples, just to encourage them. At a time when the brahmanas were very fallen in Bengal, the Ådisura brought brahmanas from Kanowj and then he re established the varnasrama system there. Swami Maharaja has also done something like that. I heard from Krsnadasa Babaji Maharaja that before leaving this planet, Swami Maharaja requested him to beg forgiveness on his behalf from his godbrothers—that, at times, he might have offended his godbrothers while preaching. This he said, I heard it from Krsnadasa Babaji Maharaja. I heard once Akincana Maharaja asked him, “What are your other godbrothers doing?” He replied, “They just eat, sleep, and ring the bell.” Hearing this they became very offended and came to me. But my observation is neutral. So I said, “The drum that he is playing, if he accepts you as a player of the bell in that band, then you should consider this to be a great honor.” My view is different. I saw that he is playing a huge drum, a battle drum, so if you get a chance to play the, or cymbals, along with that, that is a great honor to you, a more dignified position. This I am speaking from the absolute consideration.

(A few Gaudiya Matha sannyasis had many hundreds of disciples, had opened many temples, and were at that time preaching with vigor, so they were understandably irritated at being called mere bell-ringers. For example, in a conversation in Bhuvanesvara in 1977, Srila Prabhupada, hearing the report of his disciples that Madhava Maharaja had a whole village enthusiastically engaged in Krishna conscious activities, suggested that we should do likewise.)5

I am open to all. Generally, I want both parties to come, and I shall try to help that it may not be broken asunder. Such a great thing has been done by Swami Maharaja, I love it very much. That this worldwide movement organization will be broken into factions, I can’t tolerate this. So, I like that both parties will come, and I shall try to find a middle solution. But the party in power may not care to come. For a long time I am feeling unhappy whenever I come upon a person going away dissatisfied. But the party in power does not care to come to me. I am sufficiently old, but I don’t like to see that Swami Maharaja’s great work is disturbed in such a way. So laudable a thing. Prthivite ache yata nagaradi grama, sarvatra pracara haibe mora nama. Is this great action undertaken by Swami Maharaja, which is successful, going to be ruined by internal feud? Intolerable. So, if both parties come, I shall try my best before I die. I want to see a united front and a healthy institution. That is my heart’s desire.

That is what most of the godbrothers also feel [at this time, in 1980, this includes many GBC members]. They feel that whatever Srila Sridhara Maharaja says, we will accept that decision.

In the core of my heart I desire such. That it may be broken is intolerable. It should remain a united front and be victorious over the other religious principles. There are so many enemies in the name of religion. They are flourishing and such a great future will be lost. It is intolerable. And especially Prabhupada asked me to go to the West. I could not go, but Prabhupada has brought the West to me, so I have got some holy duty to discharge about that, I feel. It may not be broken into pieces. United we stand, divided we fall. But if hopeless, there’s no alternative. We must always side with the truth, not with the falsehood. Hare Krishna.

Swami Maharaja took the responsibility of that great unfinished work and did wonderfully successful work and we feel proud for him. We feel such pride for his activity. How can we tolerate in our lifetime, within two or three years after his departure, that it will be broken into pieces? It is intolerable. Hare Krishna. But if for the sake of quality, for the sake of truth, we are to face such a situation, it can’t be helped. Truth is everything, satyam param dhimahi.

From this chapter we can see the nonenvious nature of Srila Sridhara Maharaja. For more than four years he selflessly gave his sastric advice and high realizations to Iskcon. He had no desire whatsoever to capture Iskcon devotees. His nature was just the opposite—disinterested in acquirement, satisfied with a simple life. 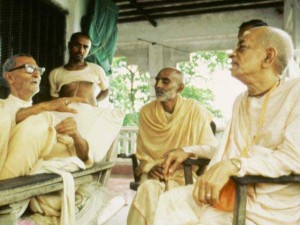 Notes:
Quotations not footnoted are taken from selected talks of Srila Sridhara Maharaja in his matha in Navadvipa.