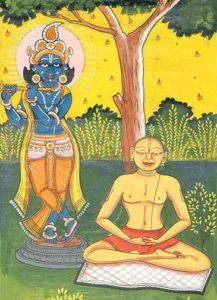 Our final lesson in our classroom series discussing chapter four of Swami Tripurari’s Siksastakam of Sri Caitanya. San Rafael: Mandala, 2005. Swami will be responding to comments and questions while guiding readers through the text. Reader participation is encouraged.

The beauty of sraddha’s blossom shines brightly, enchanted by the soothing moon of Sri Krishnacandra. This blossom of ruci enchants the entire world and also charms the sadhaka’s heart. In its shadow stands material desire and the darkness it represents. As inauspiciousness is removed (klesaghni), the sadhaka’s life becomes truly auspicious (subhada). This auspiciousness begins at nistha and fully manifests in ruci. In his first stanza of Siksastakam, Mahaprabhu has referred to it and other effects of ruci with the words sreyah-kairava candrika-vitaranam. This phrase offers us further insight into the nature of the ruci that Mahaprabhu is describing here in verse four.

The wise say that from bhakti
fourfold auspiciousness arises:
natural ability to please all people
and attract everyone’s affection,
possession of all good qualities,
and a condition of happiness.1

The sadhaka who has attained ruci is thus pleasing, popular, qualified, and happy. His or her happiness is neither material happiness nor the bliss of brahmananda. It is the happiness of the prospect of suddha-bhakti, which will grow within the sadhaka from this point to perfection.

Along with auspiciousness, three spiritual desires are experienced by the sadhaka at the stage of ruci. They manifest in the practitioner’s intellect and are thus intentionally cultivated. These aspirations are the desire to serve Krishna favorably (anukulya-abhilasa), the desire to attain a specific service to Krishna (prapty-abhilasa), and the desire to establish an affectionate relationship with Krishna (sauharda-abhilasa). They appear with greater intensity in the stage of asakti and are fully established in the stage of bhava.2

Thus ruci is the stage in which the sadhaka experiences tangible positive attainment. It is the beginning of actual love of God. The sadhaka has lost interest in material desire, and concern for liberation is obscured by the special taste for hearing and chanting that has awakened.3 Such a sadhaka’s life is filled with auspiciousness and spiritual desire. The sadhaka starts to bid farewell to the world and its God (Paramatma) from whom the baddha-jiva originates, as taste for Krishna lila begins to take precedence over Paramatma’s play of creation (srsti-lila) and all that it involves.

As Mahaprabhu turns from the world of material desire toward his inner ideal, he bows one last time to the manifestation of Krishna that rules the world, referring to him in this verse by the name Jagadisa. This name of God refers to the Paramatma feature of God, the overseer of the world, and to the aisvarya aspect of Mahaprabhu’s Deity, Krishna. Although it is not until the stage of asakti that the Deity comes to sit in the sadhaka’s heart and fully displaces the Paramatma, in the stage of ruci this displacement begins to manifest. Therefore, after addressing his Deity as Jagadisa in the first half of this verse, Mahaprabhu then refers to him as Isvara. By this name he refers not to Paramatma but rather to his Pranesvara, the Lord (isvara) of his life (prana), Sri Krishna. Thus he prays for unalloyed devotion to Krishna, his Pranesvara, life after life and not to the Paramatma to whom he is bidding farewell.

Although the baddha-jivas are originally manifest from the Paramatma, if they are pursuing Vraja prema, they are focused on Krishna, Radha-Krishna.4 However, Sri Krishna is lost in his Vraja lila and forgetful of his Godhood. He is simultaneously God and forgetful of his Godhood, forgetful by the force of his devotees’ love, which causes him to appear as an intimate friend or lover. Although it is true that despite Krishna’s being primarily lost in love he nonetheless retains his Godhood and can thus hear the prayers of his sadhakas, one can legitimately ask at what stage of spiritual practice a sadhaka’s prayers are capable of attracting Krishna’s personal attention and, furthermore, at what stage a sadhaka’s seva becomes lila-seva, internal seva that reaches Krishna in his nitya-lila.5 While some may insist that Krishna personally listens to the prayers of his sadhakas at any stage of sadhana, Thakura Bhaktivinoda says, “The prayers of one who is a saranagata are heard by Sri Nanda-kumara.”6

As we have already learned, saranagati is complete in the stage of ruci. By invoking the name Isvara/Pranesvara in his fourth stanza in contrast to the name Jagadisa, Mahaprabhu implies that the sadhaka’s shift toward actual lila-seva has its earliest beginning in ruci, as one moves from the jurisdiction of the Paramatma to the jurisdiction of one’s personal Deity situated in his eternal lila. The deepest import of the word candrika, moonbeams, found in the first verse of Siksastakam, is that the influence of the svarupa-sakti begins to show itself ever so slightly at the stage of ruci, as Sri Krishnacandra benedicts his devotee. The influence of the svarupa-sakti develops further as ruci matures and turns into asakti, and it is complete in bhava.7

Should any sadhaka who has not yet attained ruci or asakti despair at this conclusion that in the early stages of sadhana the Paramatma is involved in one’s life more than one’s personal Deity, he or she can take solace in Mahaprabhu Visvambhara himself, as well as in the most merciful Nityananda. Although Mahaprabhu prays to Jagadisa and his Pranesvara in this verse, his followers should pray to him. He is Visvambhara, the maintainer of the universe, and he is Krishna himself, the source of all avataras.8 He is the yugavatara and he is lost in mahabhava. Thus he is both our Jagadisa and our Pranesvara. With one hand he reaches out to the baddha-jiva with the yuga-dharma and with the other he reaches up to the highest point of Vraja prema, as he dances in nama-sankirtana. He is Krishna himself yet present in the world for sadhakas in his acarya-lila, and as his other self, Sri Nityananda Prabhu, he is present that much more, with both hands stretched out to all materially conditioned souls. Thakura Bhaktivinoda has emphasized that worship of Gaura-Nityananda in dasya-bhakti begets Vraja prema. Worship in Nadiya, live in Vrindavana. Gaura-Nityånanda hear the prayers of their sadhakas, even those who have no ruci, and as their sadhakas attain ruci, Gaura-Nityånanda begin to crack open the door to service in Krishna’s eternal lila.
With a view to better understand ruci and the raganuga-bhakti that Mahaprabhu points to in his Siksastakam, it will be useful to conclude the commentary on this verse with a brief discussion of the two kinds of sadhakas pursuing the ideal of raganuga-bhakti—Vraja prema. Sri Jiva Goswami divides sadhakas who are cultivating raganuga-bhakti into two categories, ajata-ruci sadhakas (those who have not attained ruci) and jata-ruci sadhakas (those who have attained ruci). Ajata-ruci raganuga-sadhakas are inspired to cultivate raganuga-bhakti by the association of those who already have a taste for raga-bhakti. Sri Jiva describes the ajata-ruci sadhakas thus:

Those who have not achieved ruci may still engage in raganuga-bhakti simply due to association with a devotee who has this kind of attraction, but they should engage in such practice combined with vaidhi-bhakti.…The meaning of mixed raganuga and vaidhi is that one externally practices vaidhi-bhakti by making it one with raganuga to the extent that one is able to do so.9

What does it mean to externally practice vaidhi-bhakti while making it one with raganuga-bhakti according to one’s ability? It means to engage in the practices of vaidhi-bhakti, such as hearing and chanting in nama-sankirtana, with a view to attain a specific taste for bhakti that follows in the wake of the divine love exhibited by Sri Krishna’s eternal associates in Vraja and, as one’s internal life begins to manifest, to engage in Krishna lila smaranam.

Those with and without ruci are also described by Srila Rupa Goswami in his Upadesamrta, verses 7 and 8.10 In verse 7 Sri Rupa explains that just as one afflicted by jaundice cannot taste the sweetness of sugarcane, similarly one afflicted by ignorance cannot taste the sweetness of Krishna nama. However, sugarcane is the natural cure for jaundice, and thus when one is cured from jaundice by eating sugarcane, one can taste its inherent sweetness. Similarly, one cured of ignorance by chanting Krishna nama can taste the sweetness inherent in Krishna’s holy name. In verse 8 Sri Rupa prescribes the devotional activities suitable for those who have cured themselves of ignorance by following his advice in verse 7, those who are tasting the sweetness of Krishna nama. These devotees are sadhakas who have attained maturity in ruci. Sri Rupa writes:

While living in Vraja and following its inhabitants, one who possesses inherent, spontaneous love should utilize all one’s time in attentively exercising the tongue in chanting and the mind in remembering Krishna’s name, form, qualities, and pastimes, in this order. This is the essence of all advice.11

As Mahaprabhu has made clear in this fourth verse of Siksastakam, one burdened by desires for wealth, women/men, and even wisdom lacks qualification to actually live in Vraja and follow its inhabitants in every sense. We should desire to become residents of Vraja, but as this verse of Siksastakam instructs us, we should be clear on what it means to deserve such a blessing, such that our desire is realistic and thus inspires us to attend to the work at hand. Only when material desires are checked by spiritual intelligence is steady sadhana possible. This steady sadhana floods material desires such that they no longer have any possibility of fructifying, and thus one gradually develops a taste for sadhana. As this taste intensifies, it turns into spiritual attachment for the object of one’s devotion. This is the stage of asakti, to which Mahaprabhu next turns his attention in all humility.

3 Responses to Pranesvara: The Lord of the Heart