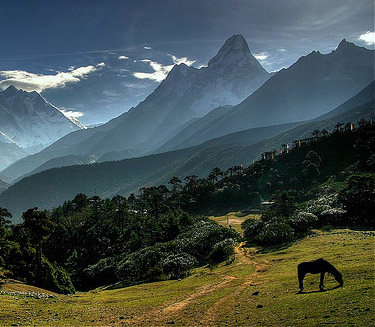 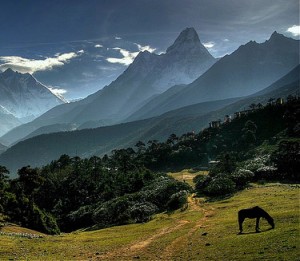 The following  article offers an interesting perspective on the role spirituality and religion play in the preservation of nature.

The idea of sacred forests or groves—wild spaces dedicated to certain gods or goddesses, and strictly off-limits to humans—is an anachronism in the modern world. In my native Britain, we lost our sacred groves with the coming of the Romans, and Western culture as a whole has long since jettisoned the concept of worshipping the plants and trees on which its survival depends. Nature is viewed as a commodity to be subdued and exploited, rather than a mysterious force inherently worthy of respect. With forest spirits and river gods now as quaint as hobgoblins, remnants of sacred sites that have somehow survived until today are mere islands of superstition in a rational, profit-driven world. It seems only a matter of time before they are swallowed up entirely.

Yet a reconsideration of the value of sacred sites may be emerging. Unlike much of the Western world, the Indian subcontinent has managed to retain many thousands of groves, forests, rivers, lakes, and mountains that are afforded special protection for religious or spiritual reasons. Despite the enormous cultural disruption caused by British rule and the wave of industrialization that followed independence, sacred places in India have survived as a living tradition into the modern age.

As the nation starts to feel the environmental strain of its economic boom, with a rapidly expanding population growing ever more hungry for land and resources, ecologists have begun to recognize sound scientific reasons for preserving human-free zones. Ancient as the tradition is, and as imbued with folklore and myth, declaring certain places sacred dovetails with some very modern concepts. Conservation groups are currently urging the Indian government—whose policies have led at times to the erosion of many sacred-grove systems—to acknowledge and understand the ways in which the country’s past may be key to its future.

In the leafy, ultra-eco-friendly environs of New Delhi’s India Habitat Center, I meet ecologist Yogesh Gokhale from The Energy and Resources Institute (TERI), a sustainable development not-for-profit organization. A gentle, unassuming man with a neat goatee beard and an air of calm, Yogesh describes himself as an “unorthodox Hindu” who believes traditions are important to understanding the functioning of social institutions. As we sip tea in his glass-walled office, he explains to me how in years to come these existing sites might be used to limit environmental degradation.

“Biologically, sacred groves are the remnants of what was once widespread,” he says. “A large number of these areas harbor species that are unique, that have been exterminated elsewhere. Authorities are beginning to recognize their importance to the local environment, and to human populations.”

Yogesh’s research has identified a number of ways in which sacred groves provide an “ecosystem service” that benefits the communities around them. These include watershed conservation, provision of natural firebreaks, and the long-term preservation of wildlife that might otherwise be pushed to the brink by human expansion or unregulated hunting. They also act as “emergency stores” for food and fuel in the event of resource scarcity, thus forming an effective protection against natural disasters.

“There are various options of conservation. The thing that we are saying is, don’t neglect faith as an option. I’m not romanticizing tribal life, but there is certainly a system in place which effectively protects the land.”

With TERI, Yogesh is working to compile studies of sacred groves across the length and breadth of the subcontinent in order to formalize their protection, and to integrate these traditional systems with Indian government policy.

Officially, India is a signatory to the Convention on Biological Diversity, ratified at the Earth Summit in 1992. This convention identified India as one of seventeen “megadiverse” countries, composed of woodlands, grasslands, wetlands, deserts and mountain ecosystems, and recognized, for the first time, the preservation of natural diversity as “a common concern of humankind.” Targets were set for the year 2010 to expand existing protected areas, and achieve a “significant reduction” in the rate of biodiversity loss.

“If we are to achieve our 2010 targets, we need to recognize these traditional practices,” says Yogesh. “Systems of sacred grove conservation have proved themselves to be a very successful way of preserving the environment.”

“If you go into the root of faith, then you will understand the link between faith and conservation,” adds documentary-maker Rishu Nigam, director of Reviving Faith, which tells the story of sacred groves in the southern states of Karnataka and Maharashtra. Together they explain how environmental lore has long been embedded in the cultures of forest-dependent communities[…]

There are many examples of how this system of spiritual protection works in practice to ensure the long-term sustainability of natural resources. The sacred pools located in the Dharamshala district of Himachal Pradesh, where fishing is strictly prohibited for about three hundred feet up- and downriver, provide a refuge in which fish stocks can regenerate. Similarly, sacred groves in Maharashtra provide a sanctuary for barking deer, which can be hunted outside the groves and are reportedly more plentiful than in surrounding regions. In the desert state of Rajasthan, sacred groves, known locally as orans, are maintained as safety reserves for crucial fodder and timber. The groves of the northern Himalayan states help prevent soil erosion and landslides, stabilizing the mountain landscape[…]

Although India still retains a great many of its sacred sites, the subcontinent is far from immune from the destructive trends of globalization, or the powerful market forces which have eroded spiritual beliefs in other parts of the world. British rule was responsible for beginning a process of centralization, in which local tribes and communities lost their traditional rights of forest management. This process was continued after independence in 1947 by an Indian government bent on industrialization. Centralized power, inflexible and insensitive to local needs, often proves to be bad for the environment. Many thousands of sacred groves have been felled by logging companies, and as communications have improved, the diverse cultures which protected them have inevitably been diluted[…]

Yogesh’s work with TERI suggests that, now more than ever before, society needs a new notion of the sacred. Far from being an antiquated concept—a throwback to a vanished age—the revival of our ancient sense of the mysteries of nature may prove essential for our survival. Science must build on spirituality to make our environment sacred once again.

This article was adapted from an article entitled New Notion of the Sacred, appearing in Search Magazine March/April 2009.