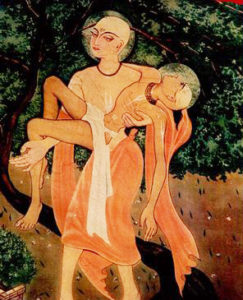 Lesson one in the Harmonist classroom series discussing chapter five of Swami Tripurari’s Siksastakam of Sri Caitanya. San Rafael: Mandala, 2005. Swami will be responding to comments and questions while guiding readers through the text. Reader participation is encouraged.

Once again Gaura Krishna begs in great humility, this time requesting the gift of eternal service, praying for a spiritual identity. In doing so he simultaneously speaks about the nature of one’s material identity, a sense of existence determined by material conditions.1 In this way he teaches us how the sadhaka at the stage of asakti yearns to be established in his or her eternal identity, retiring the fleeting sense of identity—the material ego—derived from the influence of material nature.

Material nature is constantly in flux, such that it is practically impossible for one under her influence to catch one’s balance. As we toss and turn on the waves of material existence, material conditions change and so too does our sense of identity. A daughter becomes a wife, then a mother, then a grandmother, and then in the next life perhaps a son, and so on. Our desires and attachments determine our sense of self. Indeed, we are our attachments—a father based on attachment to sons and daughters, a husband based on attachment to a wife. Our sense of “I” is derived from our sense of “my.”

The ground beneath our feet is moving. Although it looks solid, it is liquid. Speaking to Rama Raya and Svarupa Damodara, Mahaprabhu compares material life to being lost at sea in a storm, patitam mam visame bhavambudhau. This is practically a hopeless condition, and one can only be saved by help beyond one’s own effort. Thus Sri Krishna Caitanya appealed to Nanda-tanuja for mercy, krpaya. Advanced sadhakas pray like this.

Reflecting on this verse of Siksastakam, Thakura Bhaktivinoda sings, anadi karama-phale, padi bhavarnava jale: “Due to the results of beginningless karma, I have fallen into the material ocean.”2 Fortunately, as unimaginably long as it may take, beginningless karma can come to an end. In the stage of asakti, the lingering smoke of the fire of samsara is dissipated once and for all. This is the final end of karma’s influence, which began to disappear in the stage of nistha.

When the sadhaka realizes the import of diksa and his or her sambandha-jnana is thus complete, two results follow. One’s external practitioner’s body, or sadhaka-deha, becomes spiritualized, and the sadhaka, having completed the course of sadhana-bhakti, becomes eligible to engage in lila-seva to Krishna in an internal spiritual body. In other words, as asakti matures, nama-sankirtana brings “the bride named knowledge,” Krishna’s svarupa-sakti, to life in the sadhaka’s heart—vidya-vadhu-jivanam. This awakening heralds the appearance of the sadhaka’s siddha-deha.

Regarding the sadhaka-deha, Sriman Mahaprabhu told Sanatana Goswami that a Vaishnava’s body should never be considered material but rather transcendental and full of spiritual bliss.3 He explained that this spiritualization begins with diksa, and that when the sadhaka realizes the import of diksa, his or her sadhaka-deha is so spiritualized that it becomes worshipable by even Krishna himself!

At the time of diksa, Krishna makes one equal to himself.
He makes one’s body full of consciousness and joy
and worships the feet of that spiritual body.4

These words of Mahaprabhu can be rendered into English with two slightly different meanings, the first of which, as we have seen, finds one’s sadhaka-deha worshipable by Krishna.5 The second possible rendering is similar but not quite as emphatic in its glorification of the sadhaka-deha. This reading merely tells us that Krishna makes the devotee’s body spiritual like his own so that the devotee can engage in the service of his lotus feet, for Krishna cannot be served with material senses.6 Thus the sadhaka realizes a spiritualized sadhaka-deha on attaining the stage of asakti.7

Regarding the internal siddha-deha that is glimpsed asakti and further cultivated in bhava-bhakti, Thakura Bhaktivinoda writes in his Bhajana-rahasya, “At this stage (asakti) of cultivating nama-sadhana, the aspirant prays for knowledge of his eternal spiritual identity and for service to Krishna (in that identity).”8 In the same book, the Thakura writes about how the gradual development that leads to the awakening of one’s siddha-deha is outlined in Siksastakam:

One should next become mature in one’s worship on the basis of the first four verses, before accepting one’s spiritual body with the fifth verse. With this verse, one begins to take shelter of Srimati Radharani’s lotus feet in the siddha-deha and then make gradual progress. By the time one has reached the sixth verse, one’s contaminations have pretty much disappeared and one therefore has the right to worship in one’s siddha-deha. If anyone tries to meditate on his spiritual body without having this qualification, his intelligence will be turned upside down due to his lack of strength.9

Further evidence that the sadhaka’s siddha-deha is glimpsed and ultimately realized as a result of nama-sankirtana is given by Sri Krishna in his speech to Uddhava:

Commenting on this verse in his Raga-vartma-candrika (1.9), Sri Visvanatha Cakravarti Thakura writes that when sacred greed for Vraja bhakti awakens within the sadhaka’s heart, the sadhaka’s path is illumined both externally by Sri Guru and internally by the indwelling oversoul, the antaryami. The Thakura explains that a sadhaka may receive instructions about cultivating an inner spiritual identity in one of three ways. The sadhaka may hear directly from the mouth of Sri Guru, from a qualified sadhu, or from within, as the instructions manifest of their own accord in the heart that has been purified by practices such as nama-sankirtana. At the stage of asakti, the sadhaka attains this purity, evidenced by his or her being freed from the enjoying spirit and established in a spirit of service.

6 Responses to The Sadhaka- and Siddha-Dehas