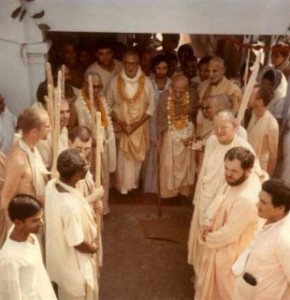 In chapter 5, Swami B. B. Visnu responds to common objections, point-by-point.

Preaching styles among Vaishnavas may differ greatly. It is Krishna’s special mercy that he empowered one Vaishnava, Srila Prabhupada, to spread Krishna consciousness all over the world and chose another, Srila Sridhara Maharaja, to stay in one place and preach. Many great Vaishnavas in our line did not preach extensively, such as Gaura Kisora dasa Babaji, Lokanatha Goswami, and Gadadhara Pandita. Yet all these devotees greatly served the Lord according to his desire and are considered most dear to the Lord. Srila Prabhupada’s contribution is unique, unprecedented, and deserves the highest praise. This does not mean, however, that the activities and contributions of all other devotees must then be seen as insignificant or worthy of criticism. Each Vaishnava is unique and should be seen in this way:

One should not be envious, considering one preacher to be very great and another to be very lowly. This is a material distinction and has no place on the platform of spiritual activities. Krsnadasa Kaviraja Goswami therefore offers equal respect to all the preachers of the cult of Sri Caitanya Mahaprabhu, who are compared to the branches of the tree. Iskcon is one of these branches.1

Some say that Srila Sridhara Maharaja’s tasteful illuminations of the most sublime aspects of madhurya-rasa and the tantamount importance of Srimati Radharani and her dearmost Rupa Goswami [Manjari] are not in line with Srila Prabhupada’s teachings. But we cannot deny that we are a madhurya-rasa sampradaya. It is our Gaudiya sampradaya’s prominent teaching, and it was dealt with skillfully by Srila Prabhupada. He warned us not to read the tenth canto of the Srimad-Bhagavatam, neglecting the first nine cantos, but presented Krsna Book early on, showing us the standard. We invite our readers to read Loving Search For the Lost Servant by Srila Sridhara Maharaja to see how he also tastefully presents madhurya-rasa. In this sublime literature, Srila Sridhara Maharaja presents the highest ideal, prayojana-tattva—the ultimate aspiration of the followers of Sri Rupa—in a sweet and relishable way with such taste and careful consideration that one will not be mislead. Srila Prabhupada has also said:

Oh! It is not that the gopis are boycotted. The policy should be that because people may not understand the gopis—they may think they are ordinary girls—we should be careful how we present the gopis. It does not mean that we shall not even utter the word gopis, that we have taken a vow to boycott the gopis. No. They are worshipful devotees. How can we avoid them?2

One who has not been attracted by the transcendental beauty of rasa will certainly be dragged down into material attraction, thus to act in material contamination and progress to the darkest region of hellish life, but by understanding the conjugal love of Radha and Krishna one is freed from the grip of attraction to material so-called love between man and woman. Similarly, if one understands the pure vatsalya, sakhya, and dasya love for Krishna, one will not be attracted by their material counterparts.3

“Sri Caitanya Mahaprabhu desired to taste the sweet essence of the mellows of love of God [madhurya prema-rasa], and he wanted to propagate devotional service in the world on the platform of spontaneous attraction [raganuga-bhakti].”5

The very name of Srila Bhakti Raksaka Sridhara Deva Goswami Maharaja—Bhakti Raksaka—literally means guardian of devotion, a name given by his Guru Maharaja, Srila Bhaktisiddhanta Saraswati Thakura, in recognition of his purity in the line of Srila Rupa Goswami. When it was suggested by his godbrothers that Srila Sridhara Maharaja had been granted entrance into manjari bhava by Bhaktisiddhanta Saraswati Thakura at the time of the Thakura’s departure, Sridhara Maharaja remarked that he felt that he was posted at the gate. Later, recalling this incident, he remarked further that “he was not letting just anyone in.” Thus his discussions regarding the highest mellows of love, the prayojana-tattva, were always tasteful and appropriate. Srila Sridhara Maharaja spoke about things that Prabhupada had not gone into detail about, yet everything he spoke about was appropriate for advancing sadhakas. Should we think that our siksa guru will have nothing new to say? If so, what then is the purpose of a siksa guru?

A Pound Of Caution

Srila Sridhara Maharaja’s penetrating explanation of Brahma Gayatri pointing to radha-dasyam revealed his profound depth of realization. He also gave a deep explanation of Sri Bhagavad-gita, revealing the extent to which the Gaudiya siddhanta is represented in the Gita. His brilliant and penetrating madhurya commentaries charmed and captured many hearts. But it is to be noted that Srila Sridhara Maharaja always gave us a pound of caution with every ounce of sweetness. His distaste for the sahajiya section was well-known. He referred to the premature siddha-pranali advocates as pukura-curiwale, pond thieves, and called their so-called sakhi identity false and imaginary and their achievement sheer concoction-having not even passed through anartha-nivrtti.

Examining the quality of Srila Sridhara Maharaja’s writings, one cannot help but realize his substantial connection with the topmost object of our aspirations, his total internal absorption and dedication to the highest ideals of Vaishnavism. That Srila Sridhara Maharaja presented profound realizations and deep knowledge of the scriptures is self-evident to the unbiased observer. And this is the criterion for judging a Vaishnava as given by Srila Rupa Goswami Prabhupada—to take note of his internal absorption over his style of delivery or temperament. One simply has to read Srila Sridhara Maharaja’s literatures or listen to the recordings of his talks for oneself.

One should chant sixteen rounds, as recommended by Bhaktivedanta Swami Maharaja, but if there is any emergency, one must chant at least four rounds; the mala should not be kept fasting.

This harinama maha-mantra is found in the Upanisads, as well as in the Agni Purana and the Brahmanda Purana. In the Kalisantaranya Upanisad, it is recommended as the highest mantra, and scholars have mentioned this mantra as a means of address only; no appeal should be attached to it. This Hare Krishna maha-mantra is the yuga-dharma nama, or the process of God-realization especially meant for the present age: Kali-yuga.

Once, one of our godbrothers (Akincana Krsnadasa Babaji Maharaja) was the subject of our Guru Maharaja’s stern remark. He was a man of good character, but his tendency was generally toward nama bhajana. He did not like to do any other service, but was only inclined to chant the name of Krishna on his beads. I was in charge of the Delhi temple at the time and was intimate with him, so I wrote to Prabhupada [Bhaktisiddhanta]: “If you permit, I would like to engage my godbrother in some preaching work here in the Delhi temple.” The letter that Prabhupada wrote is still here. He wrote me in his letter, “If you can bring him there and make him help you in the work of preaching, then you will be doing the service of a real friend to him. I don’t recognize that sitting in the jungle of Balihati only chanting, counting beads, is krsnanusilanam, the proper cultivation of Krishna consciousness.”

So, kirtana means preaching, sravanam, kirtanam. Kirtana does not simply mean loudly chanting, but preaching. Preaching means there must be a fight with the opposition party. Kirtana means a fight. Kirtana creates the divine vibration. It will fight with all the ordinary vibrations that are floating in this world in subtle and gross waves. So, our Guru Maharaja told us that our tulasi beads should not fast. His minimum advice was that we must do some service in the form of chanting Hare Krishna while counting on beads, at least once daily. His exact words were malika upabasa na: “The beads should not fast.” And his general instruction was to preach as much as possible.

Once I had a talk with one of the big spiritual leaders of the Udupi temple in Madras. He told me, “Sometimes I preach about Madhvacarya and the bhakti cult, but I have no time for sadhana.” I supported him. Our Guru Maharaja said that hari-katha, preaching about Krishna, is no less important than sadhana. Rather, it is a more living thing, pran ache yar sei hetu pracar. Preaching is more vital. When we are preaching, we must have the maximum concentration, but while chanting on our japa beads, we may be absentminded. When we are speaking about Krsna, we must be all-attentive; otherwise, we cannot speak accurately. All our attention will automatically be concentrated when we talk about Krishna. And in writing about Krishna, accuracy is even more necessary than speaking about Krsna. So, writing is also kirtana. The cultivation of Krishna consciousness may even be more intense when we are engaged in writing about Krishna.

The preaching mission of Srila Bhaktisiddhanta Saraswati Thakura, the Gaudiya Matha, has declared totalitarian war against maya, illusion, and all other existing conceptions of religion. What is really all-important is the spirit of service. We are not told that the gopis always count the name on tulasi beads, yet they possess the highest position in the service of Krishna in Vrindavana.

So, Krishna nama will help us greatly to go toward Vrindavana. Its importance is there. Like an express train, the holy name of Krishna carries us to the goal without stopping at any other station. My Guru Maharaja’s general recommendation for his initiated disciples was to chant 25,000 names, 16 rounds daily, or at least four rounds minimum. When someone had no work, he would chant 100,000 names, or 64 rounds.

Srila Sridhara Maharaja is enunciating the teachings of his Guru Maharaja, Srila Bhaktisiddhanta Saraswati Thakura, so one should be careful not to criticize these instructions of our param guru; rather, one should try to harmonize them with Srila Prabhupada’s.

But Srila Sridhara Maharaja Was Outside ISKCON

One Response to Our Affectionate Guardians, Chapter Five