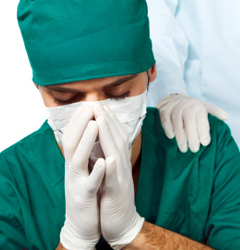 The Christian Science church is seeking to insert a measure in the Senate’s health care legislation that would encourage private insurance companies to cover prayer and spiritual treatment of the sick, even though both the House and Senate turned down earlier versions.

The push is just one facet of a broader health care debate over whether the government should encourage — or use taxpayer money to support — alternative therapies and treatments that are not considered “evidence based.”

Such treatments are no longer on the sidelines. In 2007, more than one in three adults used some form of so-called complementary and alternative medicine, according to a federal study, spending $34 billion in out-of-pocket expenses on techniques like yoga and meditation and on the purchase of herbs, vitamins and supplements. Some of those treatments and supplies are now covered by some insurance policies.

Although the Christian Science measure calls for reimbursement for some basic forms of care for the sick, like helping them eat and bathe, the prayer component has drawn fierce opposition from various civil liberties groups and child-protection advocates. They say it would violate the separation of church and state and could endanger the lives of minors whose parents turn to prayer rather than medicine when their children are ill.

In the past, some members of the church, formally known as the Church of Christ, Scientist, have been prosecuted for allowing children to die instead of treating them medically. But such cases are rare. And while healing through prayer remains their central belief, church officials say they do not forbid conventional medical treatment.

The church has had powerful allies. Earlier this year, its reimbursement measure passed two committees in the House and one in the Senate.

The Senate health committee acted at the behest of Senator Edward M. Kennedy, Democrat of Massachusetts, where the church has its headquarters, and Senator Orrin G. Hatch, a Utah Republican who is a Mormon and has said the measure would ensure that the health legislation “does not discriminate against any religion.”

In the end, critics said it was unconstitutional, and the measure was dropped from the final House bill and from the Senate version being debated now.

But Russ Gerber, a spokesman for the church, said church officials were still trying to get it into the Senate bill. He said they were drafting new language to clarify that no federal money would be involved. “We’re looking for ways to introduce this as one element of a very large and inclusive health care initiative,” Mr. Gerber said.

It is not clear if the church will find a sponsor. Aides to Mr. Hatch said he did not plan to offer such an amendment. Still, Mr. Gerber said the church was not discouraged.

“Nothing has come along to say to us, ‘Pack up the tent and go home,’ ” he said.

The church’s provision says that any insurer offering health insurance on the exchanges that would be created in the health legislation could not discriminate against a health service “on the basis of its religious or spiritual content.” Such content would be defined as medical expenses for which the Internal Revenue Service now allows deductions. The I.R.S. specifically names Christian Science practitioners, who pray for people at a cost of about $20 a day or care for them in nonmedical ways, as deductible expenses.

Although the reimbursement measure is narrowly drawn to apply to Christian Science practitioners, it does not mention the church by name. Sharon Frey, another press officer for the church, said the measure would probably also cover spiritual care provided by Native Americans and holistic healing centers.

The new language would specify that only private premiums could pay for a spiritual care benefit and that no federal money would be used to reimburse practitioners.

But the changes do not appear to satisfy critics.