Review: Cows and the Earth 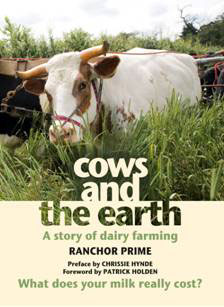 Ranchor Prime, Cows and the Earth: A Story of Dairy Farming. London: Fitzrovia, 2009.

A while ago, I saw a cookbook called The Kind Diet. The title caught my eye, but upon discovering it was a vegan cookbook with an emphasis on ecological concerns, my heart sank a little. Not because I think there’s anything wrong with being vegan or ecologically informed, but because the book made it seem like the only way to eat a “kind diet” was to be vegan.

The thought that my eating habits, although vegetarian, might be supporting less-than-kind treatment of animals and the earth disturbed me. In fact I had been thinking about becoming a vegan for some time before I encountered The Kind Diet and also before I encountered another book called Cows and the Earth: A Story of Dairy Farming by Ranchor Prime, an artist, teacher, and leader in yoga communities. Prime has also been a project director for World Wide Fund for Nature, and an advisor to Alliance of Religions and Conservation.

I had been growing more and more uneasy with the thought that by buying milk I was supporting an industry that was harmful to cows, the earth, and the ecosystem as a whole. As Patrick Holden, an organic farmer and director of the Soil Association in England, writes in the foreword to Cows and the Earth, “Everytime we eat we enter an intimate relationship with the natural world…Even if we are vegetarian it is an inconvenient truth that modern farming methods routinely involve a form of violence to the natural world, through the use of artificial fertilizers and pesticides that destroy soil life, wild flowers, insects, and all the million life forms which are able to coexist with truly sustainable farming.” So, the big question in my mind was and is: Is there a way to include milk products in a “kind diet”? Or is such a diet only possible for a vegan?

Ranchor Prime’s book offers an answer, as well as a simple (though not always easy to implement) solution to my dilemma. The book is divided into three parts: “Forgotten Stories” discusses cow farming of the past; “A Story of Today,” explains how cow farming is done in today’s world; and the final section, “Lessons for the Future,” describes the environmental effects of modern dairy practices and offers alternatives for the future improvement of humanity’s relationship with cows and the earth. In addition to Patrick Holden’s foreword, the book is prefaced by vegetarian musician Chrissie Hynde.

In Cows and the Earth, the England’s Bhaktivedanta Manor’s cow protection model of dairy farming is showcased and explained. Cow protection was essential to Prabhupada’s Gandhian ideas of self-sufficiency and his ideal, in the words of Wordsworth, of “plain living and high thinking,” and the Bhaktivedanta Manor was one of the first communities to develop a cow protection program in the West. I especially like that the Manor functions according to what have been identified as the “four principles of cowherding,” as presented in the Srimad-Bhagavatam and Srila Prabhupada’s books. The principles are (1) cows are never killed, (2) they are milked by hand, (3) calves suckle directly from their mothers, and (4) bulls are given meaningful work. Throughout the book, Prime gives compelling reasons why the Manor’s model should be implemented everywhere.

Many would agree that the Bhaktivedanta Manor’s program is wonderful; the only problem is that these programs are few and most are far away from the reach of people. Cruelty-free milk is also, inevitably, more expensive than regular commercial milk and even more costly than organic milk, both of which save money by slaughtering cows that are not cost-effective to maintain. Despite this, milk is considerably economical as a foodstuff, and dairy herds, especially in organic and oxen-powered farms, are not as taxing to the environment as, in comparison, beef herds are. Thus, buying organic dairy, and ideally, cruelty-free dairy, is a better choice for the earth, too.

According to Prime, at the core of the looming environmental disaster and mistreatment of cows lies the condition he calls “bahirmukha” (a term borrowed from Sri Caitanya-caritamrta and used in a novel way), the tendency of humans to turn away and look elsewhere when they are confronted with the suffering of another living being. Prime offers another Indian term as a solution: “ahimsa,” or non-violence. Prime argues that we should treat the earth and the cows well not only because we have to (in order to avert an environmental catastrophe) but because we can, and we are obligated to choose the kind way when it’s within our ability to do so.

This—choosing the kind way—is what makes us truly civilized human beings, because as Ranchor Prime writes in Cows and the Earth, humans and cows share a joined history and our co-existence goes back a long way. It can actually be argued that it was the cows that civilized the humans, not the other way around. So, one could say we owe it to cows to treat them with the same level of selflessness and friendliness they have always shown to us.

Overall, Cows and the Earth is a comprehensive yet easy-to-read overview of the subject, and it is relatively short (129 pages). The layout is clear and the book is made complete by the beautiful photography of Astrid Shulz.

The only concern I have is if this book will find its way into the hands of the public, not just devotees. Will people in general think of cow protection programs as only something that is important to the cow-worshiping Hindus and Hare Krishnas? Will they be able to relate to the Bhaktivedanta Manor’s program as a potentially viable business, or will they only see it as an insignificant, volunteer-run experiment?

Despite being a devotee and a somewhat ecologically aware person, I have always felt hesitant to speak about cow protection as a solution to the “milk problem” because I know so little about cows and farming that it would seem preposterous and arrogant to be more vocal about it. After all, I have never milked a cow and I don’t spend my free time herding cows. In my opinion, Prime’s book is a good resource for those interested to learn more about the reality of dairy-farming, and it is a valuable addition to the ongoing discussion about the significance of one’s diet with regard to protecting the earth.

5 Responses to Review: Cows and the Earth