Why I am Not Enlightened 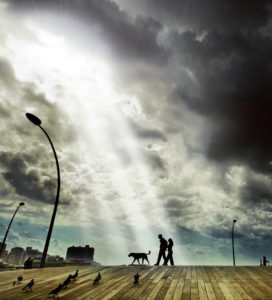 I finally figured out why I’m not enlightened. Over 30 years ago, when I had just made the proverbial first step on a “journey of a thousand miles” I heard the following well-known tale: A man approaches a Zen Master and asks to be shown the path to enlightenment. The Master replies, “Okay, follow me,” stands up, and walks the man to a nearby river and into the water. Without warning, the Master forces the man’s head under the water and holds it there as he struggles violently for his life, until he is nearly dead. At last the Master pulls the man up, gasping for air, and says, “When you want to be enlightened as badly as you wanted to take your next breath just now, come back and see me.”

At the time, as a youthful spiritual adventurer, the story inspired me and got me fired up, and fueled the years of seeking, meditating, and exotic travels to distant lands that followed. Yet now, looking back, I’m wondering if I could have saved myself a lot of trouble had I simply answered the question implied by that story honestly: No. No I do not want to get enlightened more than life itself, more than I would crave my next breath in that situation.

Again and again in the spiritual literature, and particularly in the fierce world of Zen, we come across stories that are similar. In ancient China, it is said that Hui-ka came to Bodhidharma’s cave and waited for the monk to accept him. After standing there for days with no sign of the teacher coming out to greet him, it began snowing. When the snow had reached to Hui’s waist, Bodhidharma finally came out and asked,

” What is it you want?”
“My mind is not at ease,” Hui replied.
“The Way is long and difficult,” said Bodhi, dismissing him.

Hui took out his sword and chopped off his left arm and handed it to the Master, and was accepted.

And so forth and so on; the message seems to be that enlightenment, or the realization of Truth, is not a casual affair for mere spiritual tourists, but only for the very rare individual willing to sacrifice any and everything, including his or her very life, in its pursuit.

Alas, most of us, myself included, are merely in search of, at best, “feeling better,” while possibly surrounding ourselves with consoling aphorisms and beliefs, incense, and countless books on esoteric subjects written by others who themselves have not made the final cut, so to speak. (The late Douglas Harding, one of the few who seemed to know of what he spoke, titled one of his books, On Having No Head.) But let’s face it: of all the people that you and I know who have spent a good deal of their lives sitting on meditation cushions, chanting in Sanskrit, gulping psychedelics like M & Ms, and subscribing to The Yoga Journal, how many have achieved the pinnacle of human possibility that all of the great spiritual teachings insist is available to anyone, if only we wanted it as badly as air and life itself?

It would mean putting enlightenment at the top of our To-Do list and priorities, ahead of career, family, comfort and security, things which, speaking for myself, actually comprise some of my favorite parts of being alive. In the Christian world, of course, Jesus was a “fisher of men” and told them to put down their nets right then and there and “follow me.” Like the Moonies in the early days, those who joined up never even called home or checked in with their parents. (Perhaps today the families of Peter, Judas and the rest would kidnap them and deliver them to a deprogrammer). Same for the monks who divested themselves of all worldly goods and personal attachments to traipse through the forest with the Buddha. The Jews, naturally, didn’t have much choice. Following Moses into the desert for 40 years seemed at first as if it would definitely be a step up from brutal slavery, but a lot of them bitched and moaned about it anyway. Even they didn’t always want their freedom more than the familiarity of the less than optimal life they knew.

9 Responses to Why I am Not Enlightened