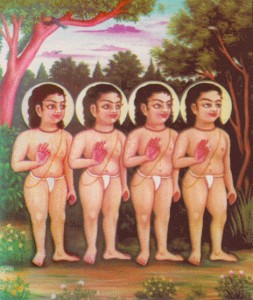 Om. The sages, it is recalled, asked of Brahma, “Who is the Supreme Deity? Of what is death afraid? By knowing what can all things be fully known? By whom is the universe made to turn?”

Sacred texts often reveal spiritual insight through narrative, and Sruti-devi follows this common practice here in Gopala-tapani. She recalls a conversation of yore between the creator Brahma and his four sons, the Kumaras, in which the import of the eighteen-syllable Gopala mantra was explained. This conversation together with the mangala verse and this second stanza constitutes the entirety of the purva section of the Gopala-tapani.

The goddess begins her narrative with the sacred syllable Om in order to further invoke auspiciousness. Om is considered the source of all sound; it contains all the holy names of God along with all related mantras. Sri Krishna has identified pranava omkara with himself in Sri Gitopanisad (7.8), and it is the first word to appear from Brahma’s mouth at the dawn of creation.

Both Brahma and the Kumaras are well-known figures from the sacred Hindu texts. Brahma is the god of creation, and his four sons are perpetually youthful celibates (kumara). They chose the ascetic path early in life, and their sober presence in this Upanisad underscores the mindfulness necessary to unlock the secrets of the text.1 One gains access to the love play of Krishna and Gandharvika, the Deities of Gopala-tapani, by taking a path that requires considerable sobriety and sensual restraint.

The Kumaras are thus fertile soil in which to plant the seed of love for Radha-Krishna, for they have come to the path of love with hearts uncluttered by material desire. They are persons of wisdom (jnanins) about to tread the path of spiritual love. It is the jnanin that Sri Krishna singles out in his sermon to Arjuna, describing him as most dear among the four types of pious persons who approach him.2 When Srimad-Bhagavatam (1.1.2) states that those who study its contents make rapid spiritual advancement, it refers to the jnanin who takes to bhakti.3 Its principal speaker, the learned and pure-hearted Sukadeva, serves as a prime example. Brahma too is no fool. He represents the embodiment of all Vedic knowledge. In this text he speaks from the vantage point of the love of Krishna he has attained by meditating on the Gopala mantra. Thus Sruti-devi refers us to a conversation between highly positioned persons in the spiritual hierarchy to further substantiate her solemn declaration about the supremacy of Krishna. The Kumaras’ questions elicit a particular response from Brahma, which highlights her chosen Deity’s extraordinary characteristics.