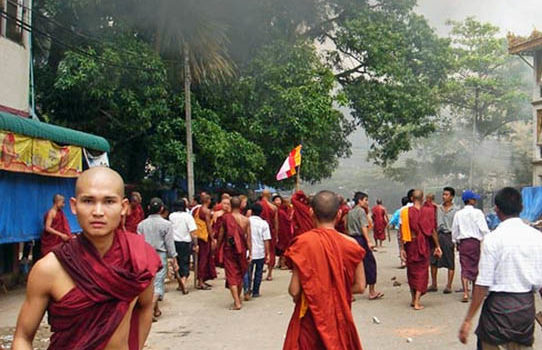 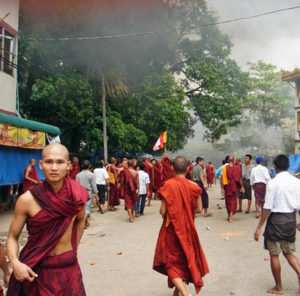 The publication of Buddhist Warfare, a book I co-edited with Mark Juergensmeyer, is a bittersweet experience as it marks the culmination of a journey that began with an exploration of the peaceful aspects of Buddhism only to end up chronicling portions of its dark side. This journey, which consumed much of the last six years of my life, began in 2003 when my wife and I spent a little over a year in Thailand. It was then that I began to research Buddhist social activism which was going to be the topic of my dissertation.

Rather than look to archives, I decided to speak with Buddhist monks and nuns on the ground. I interviewed monks protecting the forests from big business and villagers from dangerous pesticides; I met and began to chronicle the activities of the first fully ordained Thai Buddhist nun, Dhammananda Bhikkuni; and I met with Thai Buddhist monastic intellectuals.

Then in January 2004, violent attacks broke out in the southern provinces of Thailand, some of which were directed at Buddhist monks. These attacks and the numerous ones to follow shocked the country. But, since contemporary issues and my research interests seemed to be converging, I thought: what better way to study Buddhist activism than to observe Buddhist monks engaged in peacemaking?

Unfortunately, I found very little of this.

During my visits between 2006 and 2008, southern Thai monks shared the challenges of living in their fear-infested communities. All but a few concentrated on survival; peacemaking was the last thing on their minds.

The constant fear and violence took a toll on them. Monks talked about the guns they had bought and now kept at their bedsides. Others spoke heatedly about the violent militant attacks on Buddhist civilians and monasteries. Although the cause of the violence is multilayered—owing much to corruption, drug trade, and corporatization—many monks also felt Islam was to blame. In their minds, the conflict was anchored to the larger discussion of religious violence: Muslims against Buddhists.

One day after teaching an English class for Buddhist novices at a monastery a young monk came over and pulled back the folds of his robe to reveal a Smith & Wesson. I later learned that he was a military monk—one of many covert, fully ordained soldiers placed in monasteries throughout Thailand. To these monks, peacemaking requires militancy.

Since my initial realization in 2004, I began to look critically at my earlier perspective on Buddhism—one that shielded an extensive and historical dimension to Buddhist traditions: violence. Armed Buddhist monks in Thailand are not an exception to the rule; they are contemporary examples of a long historical precedence. For centuries monks have been at the helm, or armed in the ranks, of wars. How could this be the case? But more importantly, why did I (and many others) hold the belief that Buddhism=Peace (and that other religions, such as Islam, are more prone to violence)?

It was then that I realized that I was a consumer of a very successful form of propaganda. Since the early 1900s, Buddhist monastic intellectuals such as Walpola Rahula, D. T. Suzuki, and Tenzin Gyatso, the Fourteenth Dalai Lama, have labored to raise Western awareness of their cultures and traditions. In doing so, they presented specific aspects of their Buddhist traditions while leaving out others. These Buddhist monks were not alone in this portrayal of Buddhism. As Donald S. Lopez Jr. and others have poignantly shown, academics quickly followed suit, so that by the 1960s U.S popular culture no longer depicted Buddhist traditions as primitive, but as mystical.

Yet these mystical depictions did not remove the two-dimensional nature of Western understanding. And while it contributed to the history of Buddhism, this presentation of an otherworldly Buddhism ultimately robbed Buddhists of their humanity.

Thupten Tsering, the co-director of “Windhorse,” encapsulates the effects of two-dimensional portrayal in a 1999 interview with the New York Times. “They see Tibetans as cute, sweet, warmhearted. I tell people, when you cut me, I bleed just like you.”

In an effort to combat this view and to humanize Buddhists, then, Mark Juergensmeyer and I put together a collection of critical essays that illustrate the violent history of Buddhism across Mongolia, Tibet, Japan, China, Korea, Thailand, Sri Lanka, and India.

Although the book only arrived at bookstores last month, it apparently touched some nerves in the academic community before its release. Some have objected to the cover [image right], which they feel is not an appropriate subject for Buddhism. Ironically, that is the very reason this collection of essays is so important: to address the apparent and widespread inability to acknowledge the violent side to religious traditions. It is this inability that robs its adherents of their humanity.

In a way, I wish I could return to that dream of Buddhist traditions as a purely peaceful, benevolent religion that lacks mortal failures and shortcomings. But I cannot. It is, ultimately, a selfish dream and it hurts other people in the process.

Buddhist Warfare certainly contributes to the broader discussion of religious violence, but on a more intimate and local level, I hope this collection will effect some significant change in the way Buddhism is perceived in the United States. Only time will tell.