Review: In Defence of the Enlightenment 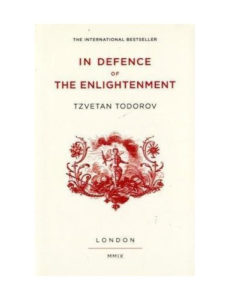 Tzvetan Todorov, In Defence of the Enlightenment. London: Atlantic Books, 2009.

There is a sect of rationalists who never cease harping on the childishness of religion, and it has to be admitted that there is sometimes something to their complaint. One of the symptoms of a childish mentality – a condition that afflicts adults, not children – is the conviction that things must be either good or bad. Evil can never come from good, it is believed, for the essential nature of good is to be simple and pure. The essence of the Christian religion, for example, is love. In that case, how could Christianity have anything to do with religious warfare or persecution? Such blemishes can only be the result of a perversion of Christian teaching, which in its original purity contained nothing hateful. No doubt much that is odious has been done in its name, but Christianity – the essence or spirit of the religion – is innocent of all evil.

This is childish reasoning, if only because it fails to understand that like every religion Christianity is made up from a variety of sources, not all of them wholly benign. Pure Christianity is a figment of fundamentalism, a way of thinking that is typical of the childish mind. But fundamentalism is by no means confined to those who call themselves fundamentalists, or to religious believers. Nowadays it is defenders of the Enlightenment who provide some of the best examples of fundamentalist thinking, and Tzvetan Todorov is a case in point. In this stiff and leaden volume he seeks to rescue the Enlightenment from distortions. He does so in the faith that once it has been properly understood no one – no one who is not fanatical, deluded or ill-willing, at any rate – can fail to accept the Enlightenment’s essential message.

A central part of this didactic enterprise is to argue that the Enlightenment is implicated in none of the evils of modern times. Jacobinism, communism and the ill-fated exercises of recent years in exporting democracy at gunpoint may have been promoted by people who were adamant that these projects served ‘Enlightenment values’. But these people were deluded; their activities had nothing to do with ‘the humanist spirit of the Enlightenment’, which promotes individual autonomy and rational criticism. On the contrary, Todorov insists, it is to the Enlightenment that we owe everything that is most valuable in the modern world. Without it we would not have liberal democracy and Europe would not exist, for ‘Europe, as we conceive it today, has its origins in the Enlightenment’.

Todorov concedes that some Enlightenment thinkers have held unreasonable views. He quotes the eighteenth-century French Enlightenment economist and statesman Turgot as declaring, ‘the whole mass of the human race advances continually, though slowly, towards greater perfection’, and cites the Sketch for an Historical Picture of the Progress of the Human Mind of Condorcet – long an Enlightenment hero – as asserting that ‘no matter how slow and discontinuous progress might be, humankind would eventually reach adulthood through the spread of culture and knowledge’. These two highly influential philosophies had a belief in semi-automatic progress that they transmitted to later Enlightenment thinkers. ‘This view of history as the accomplishment of a plan’, Todorov writes, ‘was picked up and reinforced by Hegel and then by Marx through whom it became part and parcel of Communist doctrine.’ But the fact that these eminent Enlightenment thinkers propagated an absurd faith in progress tells us nothing about the essence of the Enlightenment, according to Todorov: ‘It would be mistaken to attribute this belief to the spirit of the Enlightenment itself.’ Turgot, Condorcet, Hegel and Marx were not the authentic exponents of the Enlightenment they imagined themselves to be. Like Lenin, who described himself proudly as a latter-day Jacobin, and like the Jacobins themselves, they were heretics, deviants from a pure Enlightenment tradition that is innocent of any complicity in modern terror.

It would be hard to find a clearer statement of Enlightenment fundamentalism. Just as religious fundamentalists postulate a pristine faith uncompromised by two thousand years of history, so Todorov posits a quintessential Enlightenment that has had no part in the disasters of recent centuries. An émigré from Stalinist Bulgaria, he is especially anxious to rebut any claim that Enlightenment thinking had a role in engendering communist tyranny. ‘One would have been hard put to find any traces of the (Enlightenment) heritage in the actual workings of communist societies: individual autonomy was reduced to nothing.’ But might it not have been the pursuit of an Enlightenment dream of human autonomy that led to a destruction of freedom far more complete than any that could be envisioned in the flawed Russia of the czars? For Todorov even the question is unthinkable. The Enlightenment could no more have produced the Gulag than Christianity, as understood by its more simple-minded believers, could have engendered the Inquisition.

Todorov’s claim that Europe is a creation of the Enlightenment expresses a view of history that is no less simple-minded. It may well be true that the European Commission is an offspring of Enlightenment rationalism, but European civilization is the product of many traditions, not least those of Christianity and Judaism. Rightly, Todorov notes that the belief of some Enlightenment thinkers in a mechanical march to perfection is ‘nothing more than a transposition of the Christian doctrine of the ways of providence into profane space’. He omits to note other and more benign ways in which Jewish and Christian traditions have shaped Enlightenment thinking. It was John Locke, an early Enlightenment thinker who was also a Christian, who propounded the ideal of toleration that was taken up in much of Europe (and later America). It was an unorthodox Jew, Benedict Spinoza, who presented an early but still highly instructive account of freedom of thought. Modern toleration and pluralism are mainly the work of religious dissenters. There is no clear dividing line between Judaeo-Christian traditions and Enlightenment thinking. In its positive as well as its negative aspects the Enlightenment was shaped by Western religion, though one would not know this from Todorov’s account.

The Enlightenment that Todorov defends is one from which anything malign or suspect has been airbrushed away. It is also one from which everything that is remotely challenging has disappeared. Todorov gives some space to David Hume, an Enlightenment thinker from whom we still have a good deal to learn; but little is said of Hume’s skeptical defense of habit and convention, so different from Todorov’s eulogy of rational autonomy and so much wiser. Doubtless because Freud’s ironic and stoical view of things is unsuited to high-minded didacticism, there is no discussion of the founder of psychoanalysis, who more than anyone else continued the Enlightenment into the twentieth century.

In Defence of the Enlightenment is best read as an exercise in rationalist pedagogy. If only dim-witted humanity could seize hold of a few simple truisms, Todorov seems to believe, the world would be much improved. But the truisms he presents are mostly false or only half-true, and it is he rather than the readers he seeks to instruct who has failed to grasp simple truths. At times beneficent in its effects, as when the philosophes campaigned against torture, the Enlightenment has also been disastrous – as when Lenin and assorted neoconservatives endorsed or turned a blind eye to torture as a means of speeding up human progress. No differently from other traditions, the large and quarrelling family of thinkers and movements of which the Enlightenment is comprised has always partaken fully of human folly. Believing otherwise is childishness, a trait not uncommon among those who offer to lead humankind out of its infancy.
___________________________

2 Responses to Review: In Defence of the Enlightenment