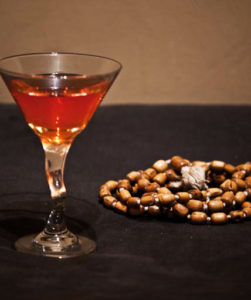 The words of Ziggy Marley’s “Love Is My Religion” floated over 30 people lying on yoga mats in a steamy, dim loft above Madison Avenue on Friday. All had signed up for a strange new hybrid of physical activity: first an hour of vigorous, sweaty yoga, then a multicourse dinner of pasta, red wine and chocolate. As soon as the lights went up, dinner was served on the floor: an (almost) seamless transition designed to allow the yogis to taste, smell and digest in a heightened state of awareness.

“It’s a little weird to sit on a sweaty yoga mat and eat soup,” said one woman, not pausing as she spooned up a smooth, cinnamon-spiked butternut squash purée from a bamboo bowl. “But people are used to doing some weird things in yoga class.”

Joy Pierson, the chef at the nearby Candle Café, a vegan restaurant that supplied the meal, sat cross-legged at the front of the room, encouraging everyone to breathe in slowly. “Ssssmell the squassshhhh waaaafting through the air,” she intoned.

Friday’s event at Exhale Spa was the first of a series of “Yoga for Foodies” sessions, devised by a young, adventurous yoga teacher, David Romanelli, and coming soon to restaurants in Chicago, Cleveland and Dallas.

Calling his mission “yoga for the Everyman,” Mr. Romanelli, 36, plays Grateful Dead songs during class, wears sweat pants rather than spandex, and has already experimented with offering chocolate truffles after chaturanga instruction. “It’s a way of getting people in the door,” he said in an interview. “The world is a better place if people do yoga. And if they come because chocolate or wine is involved, I’m fine with it.”

The past decade has produced thousands of new foodies and new yogis, all interested in healthier bodies, clearer consciences and a greener planet. Inevitably, the overlap between the people who love to eat and the people who love to do eagle pose has grown. In 2007, a combination yoga studio and fine dining restaurant, Ubuntu, opened in Napa, Calif.

But not everyone agrees that the lusty enjoyment of food and wine is compatible with yogic enlightenment. Yoga purists say that many foods — like wine and meat — are still off limits. Others, like Mr. Romanelli, say that anything goes, as long as it tastes good. The debate is exposing rich ores of resentment in the yoga world.

“The culture of judgment in the yoga community — I call it “yogier than thou” — is rampant, and nowhere more than around food,” said Sadie Nardini, a yoga teacher in New York. (“Yogis” are those who do yoga, teachers and students alike.)

Ms. Nardini “came out” as a meat-eater on The Huffington Post last year, in an essay she titled “Om Scampi.”

“Nowhere is it written that only vegetarians can do yoga,” she said in an interview. “We do not live in the time of the founding fathers of yoga, and we don’t know what they wanted us to eat.”

There are many ways to “do” yoga: the term embraces meditation, worship, study and action, as well as the physical pretzeling that Americans primarily associate with the term. Just as the Judeo-Christian tradition has produced many offshoots, yoga has many schools, like Ashtanga, Iyengar and Tantra. But over the 5,000 years of its evolution, and across Hindu and Buddhist religious traditions, yoga has always been broadly understood as a route to enlightenment and purification.

Which is where eating bacon and pouring wine in yoga class, as Mr. Romanelli has done, becomes complicated. “People are starting to push back against the traditional, quiet, serious approach,” said Mr. Romanelli, who has a scrubbed, cheerful, regular-guy aura. After graduating from Vanderbilt University, he moved to California to work as an assistant to Shaquille O’Neal’s agent. In Santa Monica, he said, there were lines down the block for yoga classes. and, noticing a business opportunity before a spiritual one, he began attending classes, where he was quickly hooked.

Ever practical, he and a partner opened their first studio in 1998 in Phoenix, where he is still based, rather than in yoga-saturated Los Angeles. He said he faced immediate disapproval when he began playing pop music in class and advertising on bus shelters, pushing the limits of the tradition. “It was the chocolate that really rattled the cages of the purists,” he said.

Both American-style yoga and the food revolution were born in the counterculture of the 1970s. Both have bubbled away in urban centers and pockets of hippiedom and are becoming more mainstream than their early practitioners could have imagined.

India has become to American yoga what France is to American cuisine: an ancient source of wisdom to be reinterpreted, democratized and repackaged by its acolytes here. The “yoga industry” now represents about $6 billion in annual spending by American consumers on classes, videos, mats and apparel like the $158 Apres Yoga jacket at the upscale chain Lululemon, according to Yoga Journal magazine.

2 Responses to The Contemporary Yogi?