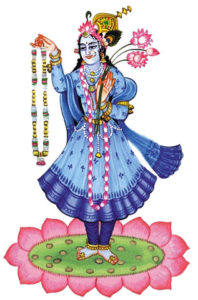 In this connection, the following verse is given: One first utters the seed klim, following it with krsnaya, govindaya, and then gopijana-vallabhaya. One who utters this mantra even once, concluding with the “great daughter of the sun” (i.e., svaha), will attain the supreme destination; he will know no other destination.

One who chants the Gopala mantra preceded by the kama-bija, understanding its meaning as explained by the spiritual preceptor, can directly attain the highest destination. Such a devotee can thus circumvent the usual course of gradual elevation through different planes leading to liberation. This is what Gopala-tapani implies in stating that simply by chanting this mantra once, one will attain the supreme destination and no other.

In Sri Gitopanisad, Krishna informs Arjuna that his devotees need not be concerned with passing from the world through the path of light as opposed to that of darkness.1 The path of light gradually elevates one by the grace of the presiding ativahika-devas—the deities of fire, light, day, the bright lunar fortnight, and the six months of the sun’s northern solstice. While this is the auspicious yogic path leading to liberation, Krishna’s devotees need not be concerned with it, because their concern for Krishna causes him to personally deliver them. He does so with the help of the daughter of the sun.

In this verse the words “great daughter of the sun” (brhad–bhanavi) tell us something more about the word svaha (previously identified with sacrifice and yogamaya) in terms of its illuminating the path to liberation and love of Krishna.2 In Srimad-Bhagavatam (10.58.20), Krishna’s wife Kalindi states that she is the daughter of the sun, aham devasya savitur duhita. This same Kalindi is the goddess of the sacred river Yamuna.

While the daughter of the sun lights the path to the world beyond the material sky in her form as the susumna nadi, she is also present in Krishna’s abode manifest here on earth—Bhauma Vrindavan. As we shall see later in Gopala-tapani, this abode is as much or more about the possibilities of liberated life as it is a potent place from which to perform spiritual practice with a view to attaining liberation. It is the land of lila that lies beyond the microcosmic and macrocosmic sense of existence, even while appearing within the world of the mind and senses. In that sacred mystical terrain, Sri Yamunadevi flows freely in love of Krishna, and Krishna’s devotees who religiously bathe in her water fl oat blissfully if not effortlessly on her devotional current into the heart of liberated life. She is also known by the name Tapati or Tapani, and thus she too sheds light on Gopala Krishna, as does this Upanisad.3 After accepting the sannyasa order, which is considered synonymous with liberation, Sri Krishna Caitanya offered the following prayer to the Yamuna as he desired to enter Vrindavan:

O daughter of the sun, although you have appeared in the form of water, you are most dear to the son of Nanda, who is the spiritual sun. You dispel the sins of all sinners. Please purify this mortal body (Cc. 2.3.28).4

Yamuna-devi is a manifestation of Krishna’s sakti–tattva, the fountainhead of which is Sri Radha. Thus the “great daughter of the sun” is ultimately identified with Radharani. It is Sri Radha who more than anyone illumines the path to love of Krishna. Therefore, in the final analysis the words brhadbhanavi (svaha) point to Radharani, who is commonly known as Varsabhanavi-devi. One who gets her favor conquers Krishna, making liberation seem insignificant, if even desirable.

Radha’s father’s name is Vrsabhanu, and the name Varsabhanavi means “daughter of Vrsabhanu.” Radha is also known as Vrsabhanu-nandini, “she who gives joy to Vrsabhanu.” Bhanu indicates the sun, and vrsa means “the greatest” or “best of its kind.” Brahman is the greatest sun, and thus Radha is the joy of the brightest sun (Brahman/Krishna). Vrsa also means “bull.” The bull is the symbol of dharma (righteousness). Thus Radha is the joy (hladini–sakti) of the brightest dharma—the prema-dharma of Sri Caitanya.

Because Radha was born at the rising of the constellation known as Radha, she was also appropriately named after it. Radha appeared in Vrajabhumi in the year that followed Krishna’s birth and under the stellar influence that marks the happiest day in his astrological chart. The name Radha also indicates worship (aradhana). She is the best worshiper of Krishna.5

While she is the Supreme Goddess, she is at the same time the supreme example of devotion to God. She personifies the highest expression of self-sacrifice, which is synonymous with svaha. Radha also personifies the hladini-sakti, the potency of Krishna that gives joy. Similarly, true self-sacrifice is joy. Thus Radha is further identified with svaha. Understanding svaha in this way while chanting the Gopala mantra deepens the devotee’s identification with Radharani and the hladini-sakti.