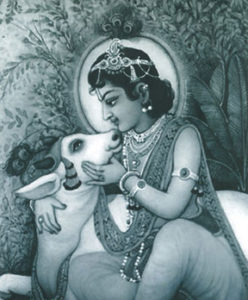 The sages then asked: Who is Krishna? Who is Govinda? Who is Gopijana-vallabha? And who is svaha?

After receiving the diksa mantra from the guru and hearing his explanation of it, the disciple is free to seek clarification of its meaning. Indeed, relevant inquiry is encouraged as it gives proof of the disciple’s keen interest in the subject matter. In this text, the sages continue their inquiry into the eighteen-syllable mantra without the slightest hesitation. Although wise and self-controlled, they are eager to delve into the mystery of the mantra. Gaudiya Vaisnavas call this eagerness spiritual greed (lobha). “Greed” appropriately describes the quality of the Vraja devotees’ love for Krishna. This love obscures the gulf that separates infinitesimal individual souls (jivas) from the infi nite Godhead, just as worldly greed obscures an individual’s decorum and leads him to act inappropriately. Similarly, it is generally considered inappropriate to treat God with anything other than veneration, but when he appears as Krishna in Vraja, he places himself in the hands of his devotees, allowing them to do with him as they please. It appears from this Upanisad that the Kumaras, who are usually portrayed by the Gaudiyas as jñani-bhaktas, have a less well-known connection with the Vraja lila and Gopala mantra. Rupa Goswami has also mentioned them in relation to Sri Radha in his Sri-Sri-Radhika-stava.1 At the very least, such keen interest in Radha-Krishna lila on the part of these four sober sages serves to underscore the lila’s deeply spiritual nature despite its superficial similarity of a material love affair.

Brahma answered: Krishna is he who destroys our sins; Govinda is the knower of the cows, the earth, and the Vedas and is also known to them; and Gopi-jana-vallabha is he who inspires the wisdom and arts of the gopis. Svaha is his maya. All these taken together are the Parabrahman in his full glory.

Inspired by the sages’ ardent inquiry, Brahma continues to enthusiastically explain the significance of the mantra, defining each of the three epithets of the Lord that make up the mantra. He says that Krishna is the Deity who destroys sins, implying that because he is constituted of knowledge, eternity, and bliss, he easily destroys sinful karmic reactions. Krishna’s capacity to destroy sin knows no limit; it includes in its scope the sins of the demoniac (asuraparadha), which are perpetrated directly against him, the Supreme Deity. Not only is Krishna capable of destroying their offenses, he sometimes does so to such an extent that the demoniac are forever freed from the capacity to commit sin again and, moreover, become his devotees. Baladeva Vidyabhusana adds that the name Krishna indicates “he whose transcendental pastimes attract the minds of even the sinful.” Brahma next explains the name Govinda, go-bhumi-veda-vidito vidita: “Govinda is he who is known (vidita) to the cows (go), the earth (bhumi), and the personified scriptures (veda), all of which are meanings for the word go.” Govinda is well known on earth, where he appears in his humanlike nara-lila. There, he is eternally identified with the cows of earthly Gokula Vrndavana, and this lila is what all the revealed scriptures point to. Brahma defines Gopi-jana-vallabha as gopi-jana-vidya-kala-prerakah. Prabodhananda Sarasvati explains this definition as follows: “The words gopi-jana are interpreted to mean ‘the forms or parts (kalah) of perfect knowledge (vidya).’ This knowledge, in turn, means loving devotion in a specific mood. He who inspires such devotion and engages the gopis in his personal pastimes is their lover, or vallabha.” Prabodhananda supports his interpretation of vidya as devotion by referring to the Gita, where devotion is called the king of knowledge and the king of secrets (raja-vidya raja-guhyam). He also quotes the Brahma-samhita (5.37) to support the interpretation of kalah as “forms”: “I worship the original person, Govinda, who, though the soul of all creation, dwells in his abode of Goloka in his own personal form, accompanied by his expanded portions (kalah), or energies, who are overcome by a special mood of love that is both ecstatic and transcendental.” With the words tan-maya, Brahma explains that svaha is the maya of Gopi-jana-vallabha; it is that potency under whose infl uence his lila is conducted, yogamaya. It is his transcendental energy and also his mercy, for maya also means mercy. As explained earlier, svaha (sacrifice) is the heart of actual life, which animates the world. Under its infl uence the illusory representation of real life dissipates. Gautamiya-tantra explains: “Sva refers to the knower of the field; ha is the higher, spiritual nature. From the combination of these two arises the sacred word svaha appearing on the lips. Therefore, the dissolution of the universe takes place in the ocean of svaha.”

Here the fruit of meditating on Krishna, chanting his mantra, and worshiping him is revealed: one becomes immortal. Prabodhananda Sarasvati comments that immortality means that one will attain a spiritual body. He explains that rasati (takes pleasure) should be understood in relation to bhajati (worships). Whoever worships Krishna with relish will attain this result. Thus Brahma speaks to the sages of uttama bhakti, or unalloyed devotion, as defined in Narada’s essential treatise on devotional tantra, Naradapañcaratra.2 Narada’s definition forms the basis of Sri Rupa Goswami’s definition of bhakti penned at the onset of his Bhakti-rasamrta-sindhu (1.1.11). Such bhakti is open to all. The word yah (whoever) in this verse implies that absolutely anyone has the right (adhikara) to tread the bhaktimarga, should such a person develop the faith that through bhakti’s culture alone he or she will attain the ambrosia of eternality, bhakti-rasamrta.

The sages asked: What is his form? How does one relish him? And how does one engage in his worship? Please explain all these things to us, for we are eager to learn.

The golden one answered: [That form is] dressed as a cowherd, has the color of a cloud, is youthful, and has taken refuge under a desire tree.

Krishna’s complexion is dark like a rain cloud and is called syama, the color that corresponds to the mood of conjugal love (srngara-rasa) in Indian aesthetic theory. Krishna’s youthfulness refers to his eternal adolescent form in Vrndavana, where he has the disposition and dress of a cowherd (gopa-vesa). The words kalpa-drumasritam refer to the legendary wish-fulfilling tree of Vrindavana, under which Krishna often stands. This tree is also symbolic of the Vedas, from which one can acquire all knowledge and thus whatever one desires, as knowledge enables one to perform action properly and thus realize its fruit. In describing itself, Srimad-Bhagavatam extends the metaphor of a desire tree, saying that the Vedas represent the tree itself and Srimad-Bhagavatam the tree’s ripened fruit. The principal subject of Srimad-Bhagavatam is Radha’s love for Krishna, and this is the fruit of the desire tree of the Vedas, which Krishna has taken shelter of and can be attained through.

One Response to Gopala-tapani Upanisad: Verses Four to Eight