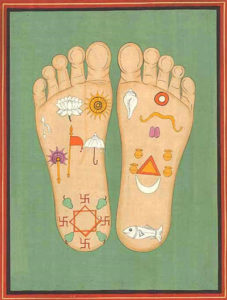 The following verses are a meditation on Krishna’s form that are meant to accompany the eighteen-syllable mantra: Lord Krishna’s eyes are like perfect lotus petals, his bodily color is that of a monsoon cloud, and his garments are the color of lightning. He has two arms, and his hands are held in the jnana-mudra. He is wearing a garland of forest flowers.

He is surrounded by cowherd men, cowherd girls, and cows, and sits decorated with divine ornaments on a jeweled lotus at the foot of a heavenly desire tree.

He is fanned by pleasant breezes moistened by spray from the waters of the Kalindi. Anyone who meditates on Krsna in this way will be liberated from repeated birth and death.

This meditation represents how Krishna appeared to Brahma. Prabodhananda Saraswati comments, “The clothes Krishna wears seem to have been made out of lightning. The jnana-mudra refers to his silence, for as sruti says, ‘He spoke without words’ (avacanenaiva provaca). All Krishna’s behavior is based on knowledge, yet he is completely absorbed in the delights of playing his flute, surrounded by the cowherds headed by Sridama, the cowherd girls headed by Radha, and the cows like Kapila.”

Furthermore, with regard to relishing Krishna in mantra dhyana, the kama-bija is the combination of water, earth, the vowel i, and the moon. The first section consists of krsnaya preceded by this kamabija. The second consists of govindaya; the third, gopi-jana; the fourth, vallabhaya; and the fifth, svaha. By chanting this five-sectioned incantation, one attains the five-limbed Brahman, which is made up of heaven, earth, sun, moon, and fire.

In text 7, after the sages ask Brahma about Krishna’s form, they inquire how one relishes this form. Here Brahma begins his answer to this second question. Briefly, the answer is that one can relish the form of Krishna by meditating on the fi vefold mantra, krsnaya govindaya gopi-jana-vallabhaya svaha, preceded by the seed of the mantra (kama-bija, or klim) introduced in this verse.

Klim is the seed of desire, from which the world above and the world below manifest. Ultimately, it reveals the secret life of the Absolute. Krishna’s secret life, or lila, arises out of spiritual desire and is thus the result of Brahman’s fullness, the joyous celebration of being fulfilled. Unlike material desire, Krishna lila arises out of completeness rather than out of necessity bornof incompleteness. Material life based on desire for sense objects, on the other hand, arises out of the sense of incompleteness that results from the soul’s misidentification with dull matter. By uttering the Gopala mantra prefaced by the kama-bija, one can move from the world of material desire to the heart of the Absolute and thereby enter the love life of Krishna.

As discussed in Sri Brahma-samhita as well as later on in Gopala-tapani, Brahma chanted the Gopala mantra preceded by the kama-bija for success in creation. Because his desire to create was not entirely unrelated to the selfless desire to serve the Absolute in love, he was successful not only in the work of creation but also in gradually transcending material desire. Through the continued chanting of his diksa mantra he was able to attain the spiritual world. He thus progressed from sakama-bhakti, devotion with material desire, to niskama–bhakti, pure devotion devoid of material desire. He combined worldly aspiration with a desire to serve the Absolute and thus taught by example how to dovetail one’s desires in devotion by uttering the sacred mantra and thereby realizing the heart of the kama-bija. This twofold power of the kama-bija that Brahma experienced is described by Srila Bhaktisiddhanta Saraswati Thakura in his commentary on Sri Brahma-samhita (5.24):

One aspect is that it tends to make the pure soul run after the all-attractive Sri Krsna, Lord of Gokula and of the divine milkmaids. This is the acme of the spiritual tendency of the jiva. When the devotee is free from all sorts of mundane desires and is willing to serve the Lord, he attains the fruition of his heart’s desire, viz., the Lord Sri Krishna. But in the case of the devotee who is not of unmixed motive, this superexcellent mantra fulfills his heart’s desire also. The transcendental kama-bija is inherent in the divine Logos located in Goloka; and the kama-bija pervertedly refl ected in worldly affairs satisfies all sorts of desires of this mundane world.

The kama-bija and Gopala mantra facilitated Brahma’s mundane affair of creation inasmuch as the letters of the kama-bija and the other elements of the Gopala mantra represent various aspects of the creation in the form of sound. Brahma thus employed these sounds in his act of creation. How the various aspects of the creation are represented in the syllables of this esoteric mantra is explained in this verse as well as in verse 26. At the same time, Gopala-tapani recognizes that there are other scriptural explanations of how the elements of the mantra correspond with different aspects of the creation. Therefore, more important than the specific correspondence is the fact that Brahma saw the subtle forms of the material ingredients within the mantra and was able to manifest them by chanting.

As important as the act of creation was to Brahma, creation is not the principal focus of Gopala-tapani. Its primary concern is the spiritual efficacy of the Gopala mantra—that is, the power of the mantra that enabled Brahma to attain emancipation and love of God. However, an explanation of the letters of the kama-bija in terms of their transcendental significance is not found in the text. Other texts have discussed more esoteric meanings for the letters of the kama-bija, so we shall now briefl y turn to them.

The Rasollasa-tantra states that the kama-bija is Krishna himself, the transcendental Cupid, Kamadeva. Brhad Gautamiya-tantra informs us that the letter ka indicates Krishna, the supreme purusa and embodiment of eternality, knowledge, and bliss. In the same text, the letter i in klim is said to indicate the supreme prakrti, Sri Radha. Radha and Krsna’s mutual ecstatic exchange of transcendental love is implied by la, and the anusvara and bindu indicate the ecstatic sweetness of their most blissful kiss.

The Sanat-kumara-samhita explains further: “O Narada, this kama-bija is not simply a combination of sounds; it is the body of the Lord himself. The ka contains Krishna’s scalp, forehead, eyebrows, nose, eyes, and ears. La is his cheeks, chin, jaws, neck, throat, and back. I is his shoulders, arms, elbows, hands, fingers, and fingernails. The half-moon is his chest, belly, sides, navel, and waist. The bindu is his thighs, knees, hips, calves, ankles, feet, soles, toes, and toenails.”

Although Brahma himself does not provide us with any explanation of how his spiritual ideal is represented in the letters of the kama-bija, he does mention in this verse that by chanting the Gopala mantra “one attains the five-limbed Brahman, which is made up of heaven, earth, sun, moon, and fire.” Prabodhananda Saraswati explains that by this statement Brahma implies that when chanting the five-sectioned mantra, one should meditate on the presiding deities of each of the fi ve sections, starting with heaven, considering them to be different forms of the Lord. He comments that the fundamental name of the Supreme Brahman is Krishna, and thus this name appearing as the first section of the mantra indicates that he stands above all. Because heaven also stands above all in this world, it is appropriate to equate the two. The second section of the mantra is identified with the earth because the name Govinda indicates one who gives joy to the earth. Sri Govinda does so by enacting his lila on her surface, and in doing so, reveals the earth’s glory: it facilitates the pursuit of his lila. The third section of the mantra, gopi-jana, represents the most effulgent truth of the gopis, who are the saktis of Krsna and in whose presence he appears most complete. Thus it is appropriately identifi ed with the sun, which is the light of lights.

The fourth section of the mantra, vallabha, refers to the husband of the gopis, who charmed them by his mastery of the fl ute during the harvest moon. When Pariksit Maharaja asked Sukadeva how Krsna could dance with the gopis when it appeared that they were already married to other men, Sukadeva replied that Krishna is the husband of everyone, even the socalled husbands of the gopis. Because the moon’s rays bring joy to everyone, Brahma identifi es the moon with the fourth section of the mantra. The fifth section of the mantra, svaha, is appropriately identified with fire because it implies surrender—the fire of sacrifice—by which our eternal relationship with the Deity is revealed.

Meditation on this five-sectioned mantra preceded by the kama-bija enables one to relish delight. Prabodhananda Saraswati says that this delight (tasya puna rasanam) implies prema, in which the effect, the experience of relishing, is assimilated with its cause. In other words, the relish itself becomes one with Krishna.