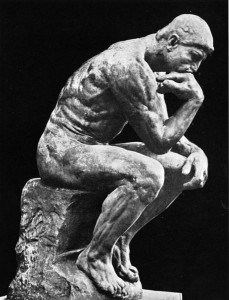 Meher Baba may not have been an avatar of God as he claimed, but his famous slogan “Don’t worry, Be Happy” is indeed the core teaching of a real descent of divinity: partha-sarathi Krishna. In the most well known of Hindu scriptures, the Bhagavad-gita, the unassuming chariot driver of the great hero Arjuna gives arguably the most profound discourse on philosophy the world has heard.

Undoubtedly Meher Baba’s catchphrase doesn’t strike the educated reader as very profound at all—and Bobby McFerrin’s billboard hit didn’t help the cause either—but the underlying essence of Krishna’s teaching to his confused friend is just this: “Please, stop worrying. You are happy (ananda) by nature, and by taking shelter of me you will be even happier (svarupa-sakti ananda).”

What then is the proof that this seemingly light-hearted instruction is the essence of this grave and deep text? The ancient Indian hermeneutic tradition has a six-step process of discerning any given scripture’s essence1 , the first of which is examining the opening and closing statements of the book. It has been said that the Gita has many beginnings and endings, but Jiva Goswami, the tattva-acarya of the Gaudiya Vaishnava lineage, has picked two verses in this regard and pointed out the parallelism between them in his Paramatma-Sandarbha. Therein he considers the substantial beginning of the book to be 2.11, where Krishna begins his instructions after Arjuna has tried to rationalize himself out of a bind and finally surrenders as a disciple of his charioteer. Krishna says,

While speaking learned words, you lament for those not worthy of lamentation. The wise lament neither for the living nor the dead.

In regard to the ending of the Gita, Sri Jiva places his bookmark at possibly the most quoted Gita verse: 18.66, where Krishna, with a heart full of affection for his dear friend and devotee, gives his final instruction:

Forgoing all religious injunctions, take exclusive refuge in me. I shall deliver you from all sinful reactions. Don’t worry.

The last thing Krishna says is ma sucah, “Don’t worry.” But how is this statement the essence of the teachings of Krishna?

A big part of our daily lives consists of worrying. We read the world according to our limited understanding of our nature and potential. We worry about having a partner, losing a partner, getting a job; we worry about our looks, social acceptance, our children and grandchildren, our parents, the economic crisis, the health reform, and so on. The list is endless, really.

As simple as it sounds, all this worrying springs from attachment to the part of existence that is forever elusive and in flux—the material sphere. If we think that material circumstances and possessions are all in all, then there is a great deal to be worried about! We will without a doubt lose everything and everyone that is dear to us.

From a spiritual perspective our worrying is like a baby’s screaming while having nightmares in her mother’s lap, and this is what Krishna is trying to teach to the grief-stricken Arjuna. All anxiety is rooted in ignorance, but in truth we are the “sons of nectar,” as Srila Sridhara Maharaja poetically puts it . Our natural position is to be eternally related to the Godhead, who is bliss and peace personified. There’s absolutely no reason to worry when we make this connection a reality in our lives. The worrying can’t be stopped simply by detachment though, because as Krishna states elsewhere in the second chapter, rasa-varjam raso’pi asya, param dristva nivartate: “The taste for sense enjoyment has to be replaced with a higher taste derived from seeing the Supreme.” Thus Krishna goes on to explain the whole hierarchy of yoga just to highlight the highest taste: devotion (bhakti-yoga) to Rasaraj, the king of tastes.

This kind of yogic dedication will eventually lead us to the land of no worry (niryoga ksema atmavan), where instead of worrying for our own acquisition and comfort (yoga-ksema), we completely forget ourselves in the pursuit of giving to the Godhead in every possible way. That realm, the land of cows, is centered on this aim alone, and is thus completely unified.

But in a land where complete giving is the only concern, who will provide for the residents?,Gopala. He says that he will personally provide (vahamy aham) for such devotees. In the Vraja-lila there are no worries. Thus it is described as cintamani dhama: the ground is touchstone; the trees, wish-fulfilling; the cows, kama-dhenu. There the cowherds live in confidence, in visrambha-seva.

If we could spend our mental energy on these kinds of topics instead of worrying about something that is already worked out—our karmic destiny—we could march towards the dense forests of Vrindvana with a measure of confidence that would give Meher Baba some editing to worry about. “Don’t worry, do saranagati.”

11 Responses to Don’t Worry, Be Happy