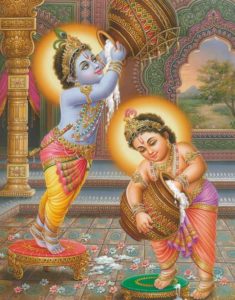 Devotion is worship of him. Such worship consists of absorbing the mental faculties in him without desiring anything in this life or the next. This worship verily is salvation, or freedom from the bondage of one’s actions.

Here Brahma answers the sages’ third question, found in verse 7. How does one worship Krishna? One worships through devotion, which is brieﬂy deﬁned here in terms of its marginal characteristics (tatastha-laksana) and primary characteristics (svarupa-laksana). The marginal characteristics of unalloyed bhakti (suddha-bhakti) are threefold. Suddha-bhakti is devoid of any innate tendency to act for a purpose other than bhakti itself, and it is not encumbered by a desire for jnana or karma. In deﬁning suddha-bhakti, Sri Rupa Goswami says, anyabhilasita-sunyam jnana-karmady-anavrtam. Anyabhilasita-sunyam means that suddha-bhakti is devoid of extraneous endeavor, and the words jnana-karmady-anavrtam explain that suddha-bhakti is not fettered (anavrtam) by a desire for material acquisition (karma) or liberation (jnana).1 Here in Gopala-tapani, Brahma speaks of these marginal symptoms of pure devotion when he says that it is devoid of desire for anything in this life or the next.

Rupa Goswami says further, anukulyena krishnanusilanam: “The primary symptom of pure devotion is the ongoing culture of Krishna consciousness (krishnanusilanam) that is exercised in a manner favorable (anukulyena) to him.” Brahma speaks of bhakti’s primary symptom when he says that it involves absorbing one’s mind in Krishna. Absorbing one’s mind in Krishna implies that one must identify with his will and act in accordance with it. Both action and emotion are involved. Sanskrit verbal roots imply both of these as well, and thus the word anusilanam indicates the culture of external practices (sadhana-bhakti) and the spiritual emotions they awaken (bhava-bhakti). Practice leads to spiritual emotion—the ﬂowering stage of love—which in turn matures into the full fruit of love of God (prema-bhakti), the ﬁnal stage of suddha-bhakti.

All three of these divisions of suddha-bhakti are further divided into orientations of reverence (vaidhi) and intimacy (raganuga). Rupa Goswami identiﬁes the two kinds of devotional service in practice as vaidhi-sadhana and raganuga-sadhana. Vaidhi-sadhana is the culture of pure devotion that is governed by the intellect—that is, the motivation to act comes from scriptural injunctions or logic in support of bhakti. Its limitation is that its culture culminates in a reverential type of love for God. Raganuga-sadhana, on the other hand, is governed by emotion. It is the culture of devotion inspired by the love exhibited by Krishna’s eternal associates in his Vraja lila. The culture of raganuga-sadhana culminates in intimate, conﬁdential love of God.

Although it is necessary to absorb one’s mind in God in both of these divisions, raganuga-sadhana is particularly concerned with smarana (meditation), and it is thus this division of suddha-bhakti that is being indicated in this verse. Here the word kalpanam implies the meditative visualization employed in advanced stages of raganuga-sadhana. This is underscored in the ﬁrst line of this verse by the words bhaktir asya bhajanam, “Devotion is worship of him.”

Prabodhananda Sarasvati comments that Brahma’s conclusion that worship of Krishna is devotion is clearly indicated by the use of the dative case in the principal Krishna mantra (krishnaya, govindaya, gopi-jana-vallabhaya) as well as through the word svaha. The word svaha will be further deﬁned as self-surrender in the following verse. A word in the dative case tells to or for whom something is done. Thus the mantra is saying, “I offer myself in surrender to Krishna, to Govinda, to Gopi-jana-vallabha.”

Surrender is the stage on which the drama of bhakti is performed. It involves not relying on our physical, mental, or intellectual faculties in and of themselves but rather using them in giving support to the soul’s surrender. Self-surrender is the underlying root of the tree of bhakti, whereas bhakti’s branches are the various uses of our human faculties in the service of devotion. The ﬂowers that grow on these branches are the spiritual emotions (bhava), which then ripen into the fruit of pure love (Krishna prema).

The previous verse mentions that by chanting the Gopala mantra one very quickly (manksu) attains freedom from karmic bondage. This result is a by-product of the culture of pure devotion and raganuga-bhakti in particular.2 Although the ripened fruit of raganuga-bhakti is difﬁcult to attain, liberation comes about through the ongoing culture of devotion without the practitioner’s consciously aspiring for it. Rupa Goswami lists “making small of liberation” (moksa-laghuta-krt) as one of the characteristics of suddha-bhakti. Thus liberation is contained within pure devotion. In this verse devotion is described as naiskarmya, which means “exemption from the necessity to perform religious or worldly acts.”

Thus the bhakti of Gopala-tapani is not a means to an end, upon attaining which bhakti herself is abandoned. This Upanisad advocates bhakti for bhakti’s sake. However, those who employ bhakti to attain nondevotional liberation easily attain it by the grace of Bhakti-devi, who manifests a sattva-guna form of herself (sattviki-bhakti) to assist them.