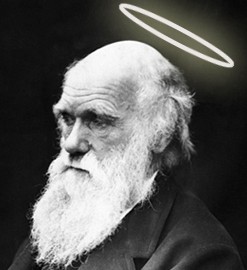 I was at a conference just recently, where we told tales of vampire bats that share their blood, bacteria that work together, and monkeys that ease group tensions by making love. It set me thinking about the evolution of morality, for there is one story of it that’s often told, and it begins with a problem. Natural selection favors the best-adapted individual: it’s called survival of fittest. It explains why we feel fear or lust. But how can this ‘selfish’ account of natural selection explain moral emotions like altruism that might lead the individual to abandon their self-interest in favor of others, even to the point of self-sacrifice?

The problem is resolved by pointing out that it’s only the gene that is ‘selfish.’ That take allows for circumstances in which the survival of the individual may not best serve the transmission of the gene. For example, the interests of the gene may be better served if the individual is sacrificed for the sake of the group, when the group is composed of kin—other carriers of the gene. That’d explain why parents will surrender all for the benefit of their children. Alternatively, the gene may be best served if the individual is prepared to form cooperative relationships with others, on the basis that if I scratch your back, you might scratch mine.

Now, this story accounts for many instances of kin and reciprocal altruism in the natural world. However, it comes unstuck with humans. We look odd from an evolutionary perspective because we will sacrifice ourselves for individuals with whom we don’t share our genes, and when there’s no prospect of the favor being returned. Call it our Good Samaritan tendency.

In order to explain these anomalies, some biologists have appealed to Darwinian “misfirings.” Richard Dawkins, for one, refers to altruism and the like not just as misfirings but “blessed mistakes.” They single humans out as alone being able to “rebel against the tyranny of the selfish replicators,” as he famously put it at the end of The Selfish Gene. Thank evolution’s oversight for that.

However, if this argument is offered to save appearances when it comes to human morality, it is withdrawn when it comes to religion. Religion too is a misfiring for Dawkins—but not a blessed one. Instead it is “an unfortunate byproduct of an underlying psychological propensity.” Perhaps our ancestors developed an instinct to believe in godlike authority as a result of the survival benefits of obeying parents without question; and for an imaginative child, it’s a small move from believing in an irreproachable earthly father to believing in a divine one. And also a ghastly mistake. Homo religious is like the moth that flies into the candle flame. Before candles, light was a means of navigation; in a world with candles, the instinct causes death. Similarly, following religious instincts leads to death—your own or that of others, often on a massive scale. Modern people, Dawkins implores, must exercise their reason and override the misfiring.

It’s All About Trust

But is that story right? Might the selfish account of evolution itself be a misfiring of Darwin’s theory? And if so, could evolutionary theory lead not to opposition, but to a renewed interest in religion—perhaps even respect for it? It’s a possibility suggested by the work of David Sloan Wilson, the champion of a different account of morality. The selfish story, he says, is a product of the “age of individualism” in evolutionary theory, an age that is both aberrant and, he believes, will prove to be short-lived.

Charles Darwin himself expressed something like this view. In The Descent of Man, he writes:

There can be no doubt that a tribe including many members who, from possession in a high degree the spirit of patriotism, fidelity, obedience, courage, and sympathy, were always ready to aid one another, and to sacrifice themselves for the common good, would be victorious over most other tribes; and this would be natural selection.

To put it another way, Darwin questions the exclusively selfish foundations of morality. As he also wrote, “the moral sense is fundamentally identical with the social instincts.”

So the Good Samaritan is not misfiring but behaving perfectly naturally. Moreover, Wilson believes that human beings are so successful, compared with our nearest evolutionary cousins, precisely for this reason. Chimps are pretty intelligent, but they operate on the basis of mistrust. Early humans, though, learned to trust their fellows. That proved to be extraordinarily beneficial since human intelligence could then develop cooperatively. We’re not always nice to each other. But we are bonded socially, and that, working in tandem with our intelligence, leads to a highly developed morality.

Religion as the Key to Humankind’s Success?

This move changes things dramatically for the evolutionary assessment of religion. It’s not just that religion provides beliefs that bind people together, much as the sociologist of religion, Émile Durkheim, proposed. Further, multi-level selection means that groups can come to behave as if they were single organisms: religion converts human groups into an “organism-equivalent.” In fact, those religions that best encourage people to feel they belong to one another, tend to be the ones that last and grow. Far from being a mistake, religion may provide the best evolutionary explanation for humankind’s success.

Of course, accounting for the origins of something proves nothing about its worth—philosophers call that the genetic fallacy. There are also reasons to question Wilson’s evolutionary theory. Further, as with our moral instincts, so with our religious instincts: we are not always nice to each other. But if our cooperative capacities have led to us having the most developed moral sense of all the animals, perhaps also with our religious sense too. Moreover, it can be valued as such.

4 Responses to Does Evolution Favor Religion?