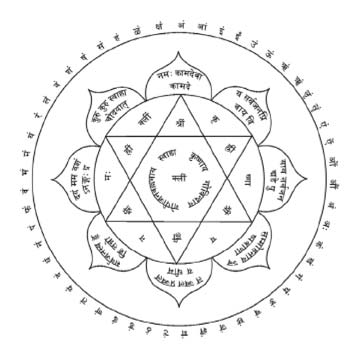 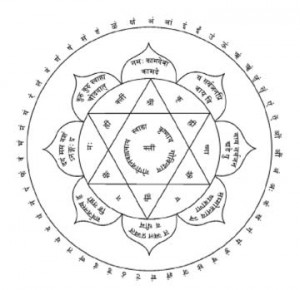 Brahma replied: One should sacrifice (yajet) to the seat (pitham) [of the mantra] (i.e., the yantra), which should be made according to the following specifications: It should have the shape of a golden lotus flower with eight petals, within which should be a six-pointed star made of two inverted triangles. At the center of this star, the mantra krsnaya namah should be written, preceded by the foremost of all seeds (i.e. klim). One should also write the mantra that gives the root meaning of the seed (i.e., the eighteen-syllable mantra) and then in the proper place the kama-gayatri. One should then surround the entire field on which the yantra has been drawn with protective tridents, and so on. In the spaces between the petals, the various other expansions, deities, and energies are to be worshiped in the avarana-puja, starting with the bodily limbs, then followed by Vasudeva, Rukmini, the energies of the sky, Indra, his parents, Vasudeva, his friends like Arjuna, and so on. By making appropriate offerings signifying surrender [to this yantra] at the three junctures of the day, the mantra will bestow upon the worshiper boundless rewards; it will bestow boundless rewards.

This text gives a brief description of the Gopala yantra—the worshipable, mystical diagram corresponding to the mantra. It is recommended that one imprint this yantra on a gold or copper plate and consecrate it for worship. All the commentaries on this verse follow Visvesvara Tirtha, who has given a detailed description of how to establish this yantra.

The conviction that sounds have corresponding forms or that sound creates form is not exclusive to mystics. In the field of cymatics, the study of the interrelationship between energy and matter, it has been demonstrated that sounds can be seen. Hans Jenny, a Swiss doctor and author of Cymatics: The Structure and Dynamics of Waves and Vibrations, invented the tonoscope about which he says, “The tonoscope was constructed to make the human voice visible without any electronic apparatus as an intermediate. This yielded the amazing possibility of being able to see the physical image of the vowel, tone, or song a human being produced directly. Not only could you hear a melody—you could see it.” By precisely controlling the rate of vibration, which was not possible without the tonoscope, Jenny attained identical results in repeated experiments. Relative to the yantra and sacred sound, further experiments showed that when the syllable Om was intoned, the image produced was a circle filled with concentric squares and triangles, closely resembling a yantra.

A yantra corresponding with a particular sacred sound, such as the Gopala mantra, is thus a geometric diagram somewhat analogous to a blueprint that forms the basis of a plane of spiritual experience, in this case the realm of Gopala Krishna. This sacred realm has sometimes been described as a hexagonal figure. For example, in Sri Brahma-samhita 5.3 we find the following verse:

The center of the divine lotus is Krishna’s residence. It is presided over by purusa (Krishna) and prakrti (Radha) and mapped as a hexagonal mystic symbol in which the eighteen-syllable mantra is manifest in six divisions together with the kama-bija. The self-effulgent Krishna stands like a diamond in the lotus’s central pivot. He is the reservoir of rasa, the greatest bliss, the joy of love.

Before entering such a sacred realm, the spiritual practitioner becomes acquainted with its blueprint (yantra) or an approximation of that realm in the form of an altar on which the Deity of the mantra is installed. The spiritual practice of meditating on the yantra or altar of the Deity is what Brahma advocates in this verse in response to the spirit of the sages’ inquiry in verse 17.

In their inquiry, the sages use the word upasana, which implies arcana. As mentioned earlier, arcana is more closely related to vaidhi-bhakti than raganuga–bhakti. However, Rupa Gosvami recommends a refined standard of arcana intended to nourish one’s culture of raga–bhakti.21 Indeed, Sri Rupa and his contemporaries established Deities of Radha-Krishna and engaged their followers in arcana. While they themselves were engaged in bhava-seva of the Deity and thus were involved in direct service unobstructed by the medium of ritual, they simultaneously established standards of ritualistic worship for beginners on the raga-marga.

When such devotees initiated into the chanting of the Gopala mantra engage in ritualistic temple worship of the Deity of Krishna (arca-vigraha), such worship serves as an aid to the internal visualization of Krishna lila. The ritual of arati, for example, is performed at specific times that roughly correspond with the daily lilas of Krishna in Vraja. Attending the early morning arati of the Radha-Krishna Deities, devotees offer various items and sing songs that correspond to the lilas of Radha and Krishna taking place simultaneously in the invisible world of Goloka. Although the lila itself is spontaneous and ever flowing on the waves of spiritual emotion (bhava), those in whose hearts this flow has not begun envision the arati ritual as a single frame—a still picture—in the entire motion picture of the lila. Jiva Gosvami has termed this still-picture meditation mantra-mayi upasana, which eventually gives way to svarasiki, or spontaneous visualization of the free flow of Krishna’s divine play. Thus arcana can serve as a medium to direct service. From arcana one can develop eligibility for bhajana, the culture of inner life in pursuit of entering the lila of Krishna. Here Brahma recommends this approach to the sages.