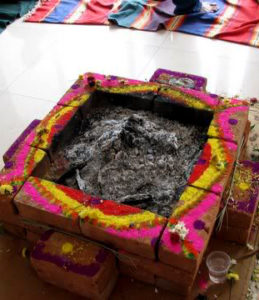 This article originally appeared in Sri Gaudiya Darsana in 1955.

This year there is an extra month, Purusottama Masa. It offers a more favorable opportunity for Krishna seva and it is a particularly favorable opportunity for the fortunate jivas. The month of Purusottama has all good qualities, just like Bhagavan Purusottama himself, and it is considered the crown of all months. Even the most holy months such as Vaisaka cannot be compared with Purusottama Masa. The Brhan-naradiya Purana explains that Bhagavan has mercifully accepted this month and given it all his power.

The materialistic smarta-sampradaya, by their karmik standard of judgement, avoid performing rituals during this month as they avoid anything considered materially auspicious, and by their calculation this extra month is materially barren and gloomy.

In Srimad Bhagavad-gita, the Lord says that if we do karma properly then we gain some capacity to enter within jnana.

But the fruit of that knowledge, the knower and the known are all nirvisesa, or similar to mukti.

By doing holy activities we may be able to attain heaven, but after finishing that good reaction, we return to this world known as martyaloka, the plain of death. In this way those who aspire for material things have to undergo reactions to their actions.

The devotees of Krishna, however, are worshipers of “kirttaniyah sada harih.” Their process of worshiping is given in Sri Caitanya-caritamrta:

They are twenty-four hours per day engaged for the Service of the Lord, for they do not have a moment for their own sense enjoyment. They cannot tolerate those who are against doing Seva, especially those who want some result in this world. When they see these types of jivas, they dislike them more than hell. We can see many scriptural examples of this.

The smartas, those under the rules of mundane nature, their material duties are already scheduled within the regular twelve months so they dismiss this extra month. However those who continually spend their time in worship and service of the Lord give much attention to Purusottama Masa. They know fruitive activity is a cause of material bondage. However those who desire material results from fruitive activity consider this month to be barren, to be materially unhealthy. Such persons dismiss this month, therefore this extra month feels it is rejected so it feels the necessity to surrender to its master.

Bhagavan always gives much protection to the surrendered, so he gives all his own wealth and property to this month and in this way it takes on his properties and becomes like Him. Therefore the Lord gave his own name, Purusottama, making this extra month the king of all months. He himself glorified this month and gave it to the hand of his most dear devotees, whom he loves as himself. The devotees serve Goloka Bihari Purusottama very happily in this month, the month when the materialists are very silent in their activities.