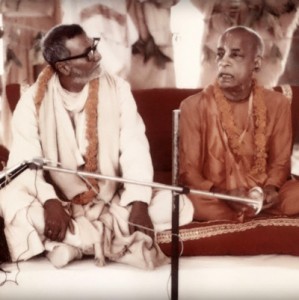 Q. What is your opinion of Hari Sauri’s account of Srila Prabhupada’s final meeting with Srila Sridhara Maharaja:

Unfortunately, the first post takes a sharp turn for the worse towards the end. There Hari Sauri’s personal insights drift into a competitive spirit that borders on offensive thinking as to how Prabhupada is more spiritually advanced than Sridhara Maharaja, although such mundane calculations have no place in genuine spiritual circles. In doing so, Hari Sauri casts Srila Sridhara Maharaja in as unflattering a light as he possibly can in order to reach a conclusion that, while seeking to serve Srila Prabhupada, regrettably manages only to add to Iskcon’s legacy of sectarianism and Vaishnava aparadha. This post is followed by a second one in which Hari Sauri makes a bold attempt to rewrite history by claiming that Srila Prabhupada never gave his disciples the option to take siksa from Srila Sridhara Maharaja after his passing.

Srila Prabhupada: “I want very much, Maharaja, that you come and stay at Mayapur. Because Prabhupada [Bhaktisiddhanta] always desired that you preach. He told me quite a few times, “Why don’t you pull him out?” [They both laugh.] You know, I also tried to some extent before, but somehow or other it did not work out. Now, why don’t you come and stay at Mayapur? Srila Prabhupada told me also, “Sridhara Maharaja is one of the finest preachers.” I want to take you everywhere. At least at the place we have in Mayapur, people are coming from all over the world. If you just agree, then whatever kind of building you want, I will arrange it for you. They are trying to build a house for me. So both of us will stay there. And whenever you want, you can come here to your matha.”

“This is my earnest desire. Since you could not go around the world and preach, at least stay there and people will come to you. I shall make that arrangement. If you stay, then it will be helpful to me also. Sometimes I need to consult with someone and there is no one. There is no one that I can consult with. I feel this deficiency very greatly…. And in that house I will make arrangements for an elevator so that you won’t have to go through the difficulty of walking up and down the stairs. You won’t even have to move a step yourself. I’ll make arrangements for a car and an elevator. My disciples are telling me that they will build a house for me. So, both of us will stay in that house. Most of the time I am traveling around, so if you are there, they can get some guidance. So, Maharaja, please, give me the order and I will make all the arrangements for you. That planetarium [The Temple of Understanding] also will be built under your direction.”

Srila Sridhara Maharaja: “Yes, as long as I am alive to fulfill [Bhaktisiddhanta] Prabhupada’s desire.”

By not doing justice to this important conversation-the importance being apparent by the fact that Hari Sauri spends the next half of the post attempting to minimize its importance—although a transcript is readily available (Hari Sauri states he didn’t have it in front of him), he avoids the stark contrast between this recorded conversation and his recollection of the private conversations that took place after the meeting. Whereas in the recorded conversation Srila Prabhupada said, “I want to take you everywhere…this is my earnest desire,” in Hari Sauri’s recollection Srila Prabhupada’s mood has changed entirely and Srila Sridhara Maharaja is practically labeled envious due to his being associated at times with other Godbrothers who were envious of Prabhupada’s success (“After all, a man is known by his association”). Hari Sauri thus evades the responsibility for explaining this dramatic contrast between the recorded conversation and his recollection/ imagination, in which Srila Prabhupada is made to appear two-faced.

This said, it is entirely possible that Prabhupada decided not to further pursue inviting Sridhara Maharaja to live at Mayapur. He had mixed feelings about his Godbrothers, and although he had a very loving relationship with Sridhara Maharaja and high regard for his siksa, other disciples of Prabhupada Bhaktisiddhanta Saraswati Thakura also had high regard for Sridhara Maharaja’s siksa, and thus they liked to take advantage of it and associate with him occasionally. Thus it is altogether possible that upon further reflection Prabhupada concluded that if Sridhara Maharaja lived with him in Mayapur some of his other Godbrothers who were not appreciative of Prabhupada’s position would also frequent Mayapur Candrodaya Mandir and that this could be problematic for his disciples.

However, Hari Sauri’s conclusion that it was Prabhupada’s desire that his followers should not hear from Sridhara Maharaja misses the boat altogether. First and foremost he fails to understand that what Prabhupada clearly wanted was for Sridhara Maharaja to share his realizations with his disciples. If he could arrange for that without having to worry that other Godbrothers of his who were envious of him would also be in the mix, he would have been successful in fulfilling Srila Bhaktisiddhanta’s request of him to bring Sridhara Maharaja out for preaching, he would have someone whom he highly respected to consult with, and his disciples would have been able to benefit from Sridhara Maharaja’s siksa. Note that in the long run Prabhupada realized two of these ideals: he did effectively bring Sridhara Maharaja out for preaching all over the world and his disciples had the opportunity to associate and benefit from his siksa without interference from any of Prabhupada’s other Godbrothers who may have been envious of his success.

Unfortunately, Hari Sauri does not give Prabhupada the credit he is due for bringing Sridhara Maharaja out for preaching, as evidenced from his erroneous account of Prabhupada’s final instruction to us about Sridhara Maharaja that I will deal with ahead. He entirely misses the salient point that Prabhupada clearly desired that his disciples have the opportunity to further flourish under the siksa of Sridhara Deva Goswami. He misses it so badly that for the last thirty-three years he has been preaching that Prabhupada’s disciples and grand disciples should not hear from Sridhara Maharaja even when his personal association was available without interference from other Godbrothers and even after Sridhara Maharaja passed away and his recorded talks were widely circulated within Iskcon, wherein many devotees including leaders of Iskcon took advantage of them with no negative repercussions!

As I mentioned earlier, Hari Sauri seeks in his second post to rewrite history altogether, history I am a personal witness to. Not only does he want to rewrite the history of Prabhupada’s final instruction to his disciples regarding the position of Sridhara Maharaja, he expects us to believe his rewrite on the basis of a private conversation he claims he had with Tamal Krsna Goswami, a conversation in which Tamal Krsna Maharaja allegedly privately changes his publicly stated version of what he and others heard Prabhupada say. While Tamal Krsna Goswami publicly stated that Prabhupada told his disciples they could associate with Sridhara Maharaja after his departure for siksa, and others who were also personally present at the time have confirmed this as well, and although this has been widely acknowledged as factual, Hari Sauri Hari Sauri implies three things, two that are in stark contrast to the facts and one that is highly questionable:

As I mentioned, I was personally present when Prabhupada gave his final instruction to us about Sridhara Maharaja, as were others. I was massaging Prabhupada’s feet and Tamal Krsna Maharaja asked Prabhupada how were we to perform the funeral/samadhi rites if he should pass on shortly. It is well known that at that time Prabhupada replied that for this we should speak to Narayana Maharaja, who resided in Mathura a short distance from Vrindavana. After a short pause Tamal Krsna Maharaja asked a follow-up question: “Is there anyone else we can consult with after your departure?” To this second question Prabhupada replied, “For philosophy, my Godbrother B. R. Sridhara Maharaja of Navadwipa.”

A brief history of what followed was that Narayana Maharaja was consulted regarding the samadhi ritual and he prominently participated in it. Then three months later at the annual Mayapur meeting, members of Iskcon’s Governing Body Commission (GBC) approached Sridhara Maharaja, who resided nearby, with philosophical questions. For several years thereafter, leading members of Iskcon continued to associate with Sridhara Maharaja for his siksa on philosophical questions and even rank and file devotees were free to approach him with their questions. Such association with Sridhara Maharaja became a contentious issue at times, but it continued for five years on the strength of the common knowledge that Prabhupada himself had opened to door to such association and sanctioned it. Had Iskcon’s association with Sridhara Maharaja been driven merely by Tamal Krsna Maharaja’s memory of what Prabhupada said to him in a private conversation, Iskcon’s GBC would not have been so hesitant to stop devotees from taking siksa from Sridhara Maharaja when his siksa called their spiritual credibility into question.

Hari Sauri concludes his second post with the following reflection:

“For whatever reason, it was done [taking siksa from Sridhara Maharaja], and we live with the consequences. If we sincerely continue with our preaching on behalf of Srila Prabhupada things will be gradually adjusted to the right point.”

The negative consequences that resulted from hearing from Sridhara Maharaja are more a result of not understanding what he actually taught and how it is in concert with Gaudiya siddhanta and then misrepresenting his siksa and offending His Divine Grace—Vaishnava aparadha. For Hari Sauri to attempt to rewrite the history of the events surrounding this issue serves only to perpetuate this aparadha.

The sectarianism and religious fanaticism in the name of guru bhakti that Hari Sauri’s posts represent are telling. They speak loudly to the thoughtful observer as to just how much the swan-like paramahamsa Srila Prabhupada may have flown the coop of Iskcon, while leaders like Hari Sauri seek by such posts to secure the faith of its members, clip their wings, and fear monger them to embrace their crow’s nest of misconception. If one wants to know who is responsible for the shadow-like status of today’s Iskcon in comparison to its luminous past, they need look no further than to its present leadership, many of whom have been serving in this capacity for decades.

Hari Sauri is a prime example, and although his may be only one opinion among many within Iskcon, his posts are most likely scheduled for future publication in his ongoing diary series. Indeed, Hari Sauri has become one of Iskcon’s leading historians of the legacy of Srila Prabhupada. Should Hari Sauri publish his rewrite of history, it will no doubt be followed up by the author’s book tour and signing at any Iskcon temple he chooses to visit. In contrast, persons like myself are banned from speaking in Iskcon because I don’t toe the party line in regard to Srila Sridhara Maharaja, although the party line was established decades ago by devotees who largely have fallen from their positions. Does anyone really think that Srila Prabhupada would agree with such a policy?

143 Responses to Crow’s Nest of Misconception