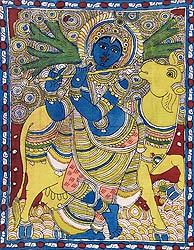 To those who are constantly engaged in worshiping this supreme abode of Vishnu rather than their material desires, he immediately appears in the form of a cowherd boy and carefully reveals his own abode (atma-padam) at that very time.

The worshipable altar of the Gopala mantra introduced in text 18 (pitha/yantra) is further described in this verse as the “supreme abode of Vishnu” (visno˙ paramam padam). The highest plane of consciousness is God consciousness, and within that plane Krishna consciousness is superlative. While Krishna appears as a cowherd, he is actually God (Vishnu), and it is because he is God that his humanlike lila is so sweet and attractive.

Krishna’s carefree play, which is aloof from involvement with the material world, is perhaps the best evidence of his supremacy. In order to play, one must have power. He who plays the most has the most freedom and power. In Sri Gitopanisad Krishna says that he sustains the entire universe by a mere portion of himself. This portion (ekamsa) is Vishnu.1 While Vishnu has some involvement in the material world as its maintainer, Govinda is that manifestation of God who, lost in divine play with his devotees, has forgotten about his godhood. Srimad-Bhagavatam (10.33.39) advises its readers to note that while Krishna appears to dance with unmarried milkmaids as if he were an ordinary human, he is Vishnu (God). It teaches that those who listen with firm faith to descriptions of Krishna’s conjugal love affairs attain a state of devotion that frees them from material conditioning and establishes them in transcendental love of God.

The stage of constant worship referred to in this verse corresponds to the stage of firm faith (nistha). Ardently listening to descriptions of Krishna lila from the lips of realized souls and worshiping Krishna under their guidance begets revelation of Gopala Krishna and his abode. Such revelation is possible in the stage of uninterrupted spiritual practice, even before one attains spiritual perfection. Krishna reveals himself in this way to help the spiritual practitioner advance systematically in terms of a specific spiritual focus.2

Here Gopala-tapani is also saying that ajata-ruci raganuga–bhakti appropriately supported by the limbs of vaidhi-bhakti—such as hearing, chanting, remembering, and worshiping the Deity—results in revelation of Gopala Krishna and his abode and thereby eligibility for raganuga proper (jata-ruci raganuga–bhakti). The mature culture of raganuga–bhakti involves living meditatively in Krishna’s abode. Jiva Goswami renders the words atma-padam in this verse as “his own abode.”

Sri Baladeva Vidyabhusana has cited this verse in his Govinda-bhasya (4.3.16) to corroborate the Brahma-sutras’ conclusion that upon passing at death, devotees who are very dear to God go directly to his abode. They do not have to take the gradual course via the ativahika deities, nor do they need to be concerned with passing at an auspicious time.3 This, however, does not entirely apply to those following the path of raganuga–bhakti, although their position is hardly less exalted. They take birth in the earthly manifestation of Krishna’s lila, where they cultivate further developments of Krishna prema in the association of Krishna’s eternal associates before entering Krishna’s abode along with him when he leaves the world.4

He who at the beginning of the creation brought Brahma into being and then entrusted him with all knowledge is Krishna. One seeking liberation should take refuge in that divine being who is the revealer of the spiritual intelligence by which one knows the self. ((This verse is based on Svetasvatara Upanisad 6.18.))

The knowledge entrusted to Brahma is the eighteen-syllable (five-sectioned) Gopala mantra, from which he derived all material and spiritual knowledge—the knowledge of both creation and emancipation in love of God. Thus Krishna, who is nondifferent from the mantra, is described in this verse as both the creator of Brahma and his deliverer as well. The spiritual intelligence (atma-buddhi) mentioned here also refers to the Gopala mantra. It is from this mantra that Brahma acquired his spiritual insight, and thus Brahma appropriately portrays himself as the spiritual aspirant and Krishna as he who is permanently situated in transcendence, the giver of the mantra.

To those who chant this five-sectioned Govinda mantra preceded and followed by omkara he shows his personal form. Therefore, anyone who seeks liberation should constantly repeat this mantra to gain eternal peace.

Prabodhananda Saraswati comments that by prefacing the chanting of the Gopala mantra with pranava oµkara, one achieves the same result as that of performing the elaborate ritual of establishing the Gopala yantra. He also points out that this verse makes it clear that one need not attain the qualifications of a Brahma to derive benefit from this mantra. Its efficacy is open to anyone who chants or meditates upon it after having received it from an appropriate spiritual lineage.